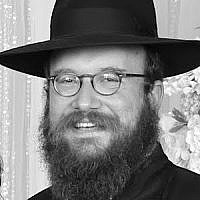 The Blogs
Yossi Deren
Apply for a Blog
Advertisement
Please note that the posts on The Blogs are contributed by third parties. The opinions, facts and any media content in them are presented solely by the authors, and neither The Times of Israel nor its partners assume any responsibility for them. Please contact us in case of abuse. In case of abuse,
Report this post.
Never again? Never  what again? Never can the world allow innocent men, women, children, and babies to be gassed, again? Never can the world be relatively silent about such behavior, again? Never can the world allow murderers of innocent people to get away, again? Never can the world negotiate with dictatorial madmen bent on domination through terror, again? Never? …
In his “serenity prayer”, the American theologian Reinhold Niebuhr writes “God, grant me the serenity to accept the things I cannot change, the courage to change the things I can, and the wisdom to know the difference.”
We cannot control what the world will or will not do, we can only decide and act upon our own moral convictions. Let’s be smart about the difference, and devote our passionate “Never Again” instinct to effecting change in places where we have the best chances for success.
Here is a statistic about something we (American Jews)  can control, and yet there is much to be desired:
The American Jewish population stands today at about 6 million – the same as it was over sixty years ago (in 1956). With the current low birth rate and the current levels of assimilation and lack of identification with Judaism, the number of connected American Jews could very well remain at the same level until 2070! In contrast, there were 1.4 million Jews in the State of Israel in 1956. Today that number has skyrocketed to 5.5 million – an increase of over 300%! This doesn’t include the 920,000 Jewish immigrants from the FSU, which brings the number to about 6.6 million. These Jews do identify with their Judaism, they practice their tradition in different ways, they feel connected to Israel, and have an average of five children per family. If American Jews had had the opportunity to develop a love for Judaism and the Land of Israel in the same way as Jews in Israel, the population here could have grown to at least 18 million …
We lost 6 million in the Holocaust … The evil perpetrators snuffed out life after precious life, destroying not only a person but all the generations that could have followed and grown into a vibrant Jewish family of hundreds and thousands, multiplied by those millions that the Nazis erased … What have we – the generations that did survive and follow – done to grow that vibrant Jewish family? The story that the numbers of American Jewry tell is “not much”:
6 million in 1956. And still 6 million in 2018.
This Shabbat is the last day of the month of Nissan, the month of Redemption, and with the strength of this joyous, redemptive season we head into the mournful, reflective season of the Omer. Reflective, because Jews don’t mourn the past for the sake of simple remembrance, but because it helps us appreciate our role – and awesome responsibility – in shaping a better future. There are things that we  can do. We  can effect change, but we must stop being asleep at the wheel.
This Tuesday night, we will salute our Israeli brethren. We’ll salute those who gave the ultimate sacrifice, so that Jews can live as proud Jews. And we’ll salute their families and friends, who – in the true Israeli spirit – make sure that the sacrifice was not in vain.
We will hear from individuals who survived the horror of the Shoah, and lives a life not of survival, but of the ultimate defiance and victory over Hitler, in their noble example of dedication to Torah, Mitzvos and the Land of Israel.
And we will commit – with the grace of G-d – to doing the same, in the passionate spirit of “Never Again”.
About the Author
Rabbi Yossi Deren was born in Nashville, Tennessee in 1973, lived in Western Massachusetts through the '80s and today serves as the Spiritual Leader and Executive Director of Chabad Lubavitch of Greenwich, Connecticut. Together with his wife Maryashie, they founded the synagogue-center in 1996 as Emissaries of the Lubavitcher Rebbe, of righteous memory.
Related Topics
Related Posts
Yossi Deren
Comments