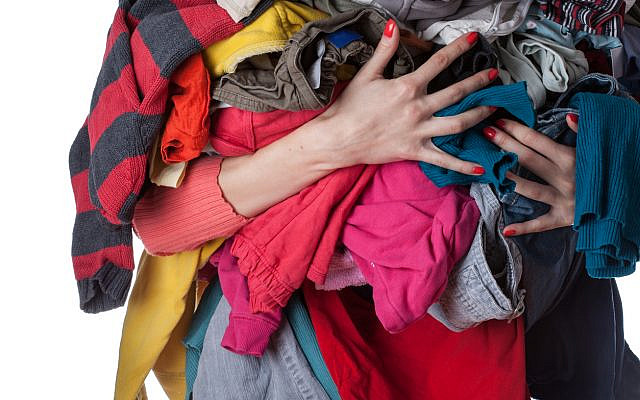 Before I became a mother, a good friend of mine gave me some sound advice that I couldn’t appreciate at the time. As Miriam sat in her living room folding her little kids’ small clothes, she described the satisfaction she felt from forming neat little piles and making order from chaos. I didn’t understand how such a mundane chore could be soothing and meaningful.

Years later, after experiencing more of life’s challenges, I learned to appreciated the wisdom of such simple satisfaction.

For many years, I experienced laundry as a never-ending task; as the mountains of clean, ready-to-fold clothes would pile up, I would feel my stress levels increase in-kind. I juggled my career, shared childcare and domestic responsibilities with my husband, was an active community volunteer, Shabbat host, and more. Laundry was always low on my priority list, and at times I outsourced it (instead of outsourcing more important priorities, such as limited time with my children).

When everyday stresses increased with the arrival of a new baby, when my family faced a serious trauma, when we made aliyah and were adapting to life in Israel, when medical issues arose, and as my children experienced challenges in school, I often felt overworked and overwhelmed; laundry became my nemesis, always lurking in the background (or more likely, piled up on a chair), teasing me, an unending, unfinished task; Mount Laundry was my Mount Everest.

While it often bothered me when my family would have to dig through the piles of clean laundry to find something to wear, and I tried various approaches to tackle the loads, for many years I was unsuccessful in finding a system that would work consistently, and unfolded laundry quickly piled up once again. This pattern remained, until I finally stopped experiencing the ever growing mounds of laundry as a burden, and learned how to enjoy and even appreciate it.

After many years of this struggle, an occupational therapist, who had helped one of my children with ADHD improve his executive functioning skills, taught me about the magic of “task bundling.” Saving an enjoyable activity to do as part of another less enjoyable chore trains one to associate that chore as pleasurable; thus the previously burdensome task becomes something one looks forward to doing, and decreases the likelihood of procrastination.

Since I learned this approach of linking an enjoyable activity with a chore, I have applied it with much success to many areas of my life. Now, I save podcasts for when I’m exercising, listen to audio shiurim while cooking, and reserve my favorite TV shows for folding laundry and ironing. By habitually linking two items, I have transformed laundry and other mundane tasks into something I’m more eager to tackle. These days, laundry rarely remains piled up for very long, and this approach has consistently worked for me for several years.

Moreover, there’s an additional, perhaps even magical, element to the act of folding laundry that I have come to appreciate, more than merely as an activity that is accompanied by an enjoyable reward. I remember my friend Miriam’s advice from all those years ago and it now resonates with me. Sometimes when I feel overwhelmed by life’s challenges, when I feel as if nothing is going well, and there is not even one area where I feel successful, folding laundry is a tangible sign of success, a burden that no longer overwhelms me. When the challenges of child rearing, the stresses of marriage, health issues, and other difficulties arise and feel chaotic, folding clothes into orderly piles is soothing and comforting, and it’s one small area where I have a little bit of control.

Perhaps this tiny feeling of success at tackling the burden of unfolded clothes will spill over into the rest of my life, and will encourage me to face other challenges and piles of responsibilities.

Laundry will always be there for me. And there’s something comforting (albeit ironic) about that.