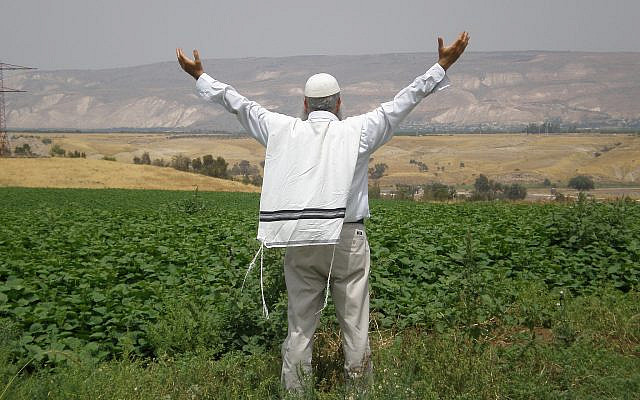 On Lag B’Omer, we pay homage to Rebbe Shimon Bar Yochai, whom Hashem chose to be the channel to bring the secrets of Torah into the world. During the 12 years he spent with his son, Eleazar, buried in sand up to their necks in a cave, shed from all material aspects, with only a spring and carob tree to sustain them, they learned the secrets of Torah from their two holy visitors, Moshe Rabanu and Eliahu HaNavi. It is worthwhile to remember that Rebbe Shimon’s quarantine came to pass after he spoke out disparagingly against Rome’s occupation of the Holy Land, and the resulting imperative to flee from his yeshiva when Roman soldiers were sent to arrest him. Rebbe Shimon stated the general rule that Esau (the father of Edom, Rome, and the western nations derived from them) hates Yaacov – the Jews, (Bereshit, 33:4, see Rashi). He boldly announced that everything the empire of Rome did in building up the Land of Israel was solely for Rome’s own selfish advantage: “Rebbe Shimon said, ‘Everything the Romans established, they established only for their own needs: They established markets – to place prostitutes there; bathhouses – to pamper themselves; bridges – to take tolls,’” (Tractate Shabbat 33B). As much as he was an outstanding Torah scholar, he was an outstanding lover of the Land of Israel and a fierce defender of its honor. The Zohar is filled with his praises of Eretz Yisrael. We shall cite but a few:

“Eretz Yisrael is the center of the world.”

“When the Jews dwell in Eretz Yisrael, blessing flows down into the world. When they are exiled, blessing is cut off from the world.”

“The Jewish Nation are one only when they dwell in Eretz Yisrael.”

“The Divine Presence reveals itself fully only in Eretz Yisrael.”

“When the Nation of Israel guards the Covenant in Eretz Yisrael, no nation can conquer them.”

“The commandments of the Torah only took force when the Jews entered Eretz Yisrael.”

“A Jew who lives in Eretz Yisrael is considered to have a God, and a Jew who resides outside of the Land is like a person who worships idols.”

“A Jew can only have true life, wisdom, and prophecy in Eretz Yisrael.”

“Fortunate is the portion of the person who merits to establish a dwelling place in Eretz Yisrael while he is living.”

The question can be asked: If it is so obvious that God wants the Jewish People to live in the Land of Israel, why are so many Jews still living in foreign lands? Rabbi Avraham Yitzhak HaKohen Kook writes that due to an alienation from the secrets of Torah, the supreme importance of a Jew’s connection to Eretz Yisrael is not properly understood. In his classic treatise, “Orot,” Rabbi Kook bases his deep insights into the renaissance of the Israelite Nation in Eretz Yisrael on the teachings of the holy Zohar, dressing up mystical concepts in the language of developing nationhood and rebirth. He writes:

“By alienating oneself from the secrets of God, the highest segulot (treasures) of the deep Divine life become extraneous, secondary matters which do not enter the depths of the soul, and as a result, the most potent force of the individual’s and of the nation’s soul will be missing; and the exile is found to be pleasant in its own accord. For to someone who only understands the superficial level, nothing basic will be lacking in the absence of the Land of Israel, the Jewish Kingdom, and all of the facets of the nation in its built form.”

What is Rabbi Kook saying in this difficult sentence?

He is saying that someone who understands only the superficial level of Judaism will feel nothing lacking if he lives far away from the Land of Israel, in a foreign country, in a gentile land, under a gentile government. A person like this lives a truncated Judaism that focuses on the individual and the individual mitzvot that he or she can do. Without a deeper understanding of the Torah, which is, first and foremost, the national constitution of the Nation of Israel as a whole, teaching us how to live in our unique Holy Land, he will not feel the need for a Jewish Land of his own, nor for a Jewish country with a Jewish army, nor for a life arranged according to the Hebrew calendar, nor for any of the other foundations of national Israeli life. His focus is on Shabbat, kashrut, and tefillin. He thinks that in order to perform them, he does not need Eretz Yisrael. He is satisfied with the individual percepts which he feels he can perform just as well in Chutz L’Aretz, and thus the exile finds favor in his eyes. Being estranged from the national component of Torah, but he does not miss having his own Jewish Homeland. The opposite is true – he enjoys the galut. He enjoys his work, his community, the education he can give to his children, and the opportunity he has to experience the “best of both worlds” – his Judaism and the gentile world around him. If there is an inner need to live in Israel, or to live there because it is the true place of the Torah’s performance, he does not feel it. Therefore, something will be missing in his yearning for Salvation, in his yearning for Jerusalem, and for the Temple, the Sanhedrin, for prophecy, for Jewish Kingship, and for all of the aspects of the Jewish nation in its rebuilt form. To his way of thinking, the concept of nationhood has nothing to do with Judaism, or with being “Frum.” He fails to understand that the highest worship and sanctification of G-d comes through the life of the Nation of Israel, in the Land of Israel, and not through the deeds of the individual Jew in the exile.

The Hasidic master, Rebbe Nachman of Breslov, was also a devoted disciple of the Zohar and Rebbe Shimon’s teachings. He taught his students that the holiness of Eretz Yisrael is the epitome of holiness, encompassing all other levels of holiness, and that genuine enlightenment and Torah wisdom come only in the Land of Israel. Repeatedly, he stated that only through the special spiritual treasures of Eretz Yisrael can a Jew rise up to the highest levels in the service of God. In addition, he taught that true faith and prayer are only possible in Eretz Yisrael, for it is specifically here in the Holy Land that prayer ascends to the worlds above (Likutei Etzot, Eretz Yisrael).

He states: “When a person attains to the level of the Land of Israel, he is worthy of being called ‘a man of strength and valor.’ Before he attains this level, ‘Let not him who girdeth on his armor boast as the one who takes it off.’ But when he has gone through the battle successfully, he is worthy of the name ‘a man of war.’”

In addition to deepening our Torah learning, how can we increase our love and yearning for the Land of Israel?

Rabbi Nachman says: “Pray to God to give you desire and yearning for the Land of Israel. Then you will succeed in reaching there.”

True, making aliyah is a very difficult mitzvah. In addition to the great joy and spiritual elevation that it brings, it is filled with challenges. The Talmud teaches that it is impossible to come to the Land of Israel without difficulties and suffering, and that to attain three things, Torah, the World to Come, and Eretz Yisrael, self-sacrifice is needed. Rabbi Nachman explains that “the root of all the difficulties and suffering lies in the slanderous image of the Land which is put about by the wicked. They are the source of all of the obstacles. But the power of the Torah which we draw into ourselves enables us to overcome all the obstacles, difficulties, and suffering. The more profound a person’s grasp of the Torah, and the greater light of rectification which he brings about through his attainment, the greater his victory will be over the obstacles, and he will succeed in reaching the Land of Israel.”