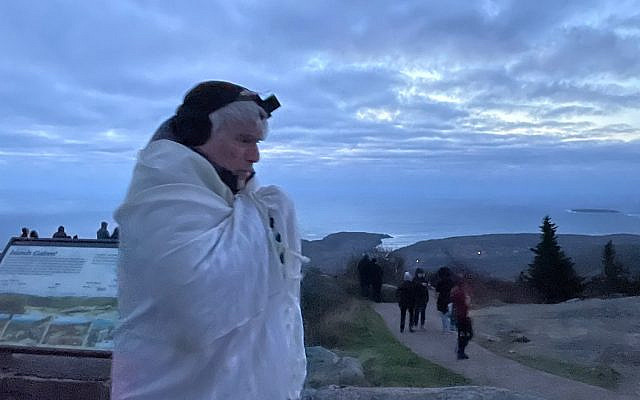 My late Israeli sister-in-law, Yael, taught us a wonderful Hebrew aphorism that she loved: al ta’am va-re’ach ein le-hitvake’ach, which translates as de gustibus non est disputandum. (You expected English?) Okay, if you insist, in English it’s “in matters of taste, there can be no disputes,” or, in Margaret Wolfe Hungerford’s pithy saying, “beauty is in the eye of the beholder.”

This idea is true concerning people, places, food, art, literature, clothing, music, and pretty much anything anyone cares about. You love it, I don’t; I think it’s beautiful or delicious, to you, yuck. We disagree — but there’s no point in arguing about taste.

And yet, as with all adages, there are exceptions. Not that there’s ever a point in arguing about taste, but, rather, that sometimes there can be no disagreement in the first place. Indeed, one such exception actually may underlie one side in a well-known talmudic dispute in Ketubot 16b-17a concerning what to say about a bride on her wedding day: keytzad merakdim lifnei hakallah. Beit Shammai says kallah kemos shehi — you praise the bride as she is, emphasizing, of course, her good qualities, but not speaking of beauty if is there none. Beit Hillel disagrees and says kalla na’eh ve-chasuda — you say to all brides that they are fair and attractive. For Beit Hillel — whose ruling is affirmed in one of the most popular songs danced to at every Jewish wedding — the beauty of brides is not open to disagreement.

But, the Talmud asks, if a bride is objectively uncomely, isn’t calling her attractive a violation of the verse in Exodus 23:7 that tells us midvar sheker tirchak — keep far from falsity. One popular answer I’ve heard (I’m aware this isn’t the answer given in the Talmud) is that Beit Hillel’s preferred language is always true. At her wedding, every bride emanates an aura, a glow, a special spark of radiant beauty. No one can disagree that on this one day the bride is “fair and attractive.”

I discovered this exception again just a few weeks ago, when my wife, Sharon, and I vacationed in Acadia National Park in Bar Harbor, Maine. Everything about Acadia is beautiful. Everything. To anyone and to everyone. There can be no vikuach, no disagreement. All who are blessed with sight and whose eyes are open see the same thing, the same enthralling, stunning, breathtaking beauty.

The leaf-peeping season supposedly had peaked the week before we arrived. While that was lucky for us because it meant that our hotel’s rates dropped drastically, it wasn’t really true because the strange weather we’ve been having recently pushed the peak off a bit. So once we reached Acadia we were immediately overwhelmed by the vibrancy of the pied leaves with mixtures of green and yellow and red and orange in numerous hues shimmering in the cool of the brisk autumn days.

Yes, there are beautiful trees with striking leaves all over New England. But Acadia also has stunning ocean vistas and inlets like Thunder Hole, naturally carved out of the rocks, where the mighty rush of waves on blustery days causes air and water to be forced out with a roar, like a clap of distant thunder, and water spouts as high as 40 feet. The awesome power of Mother Nature, or God’s Nature, is palpable.

And only Acadia has Cadillac Mountain, the highest point on the US’s North Atlantic seacoast, which offers magnificent views of a glaciated coastal and island landscape, and Otter Point, jutting out into the Atlantic with amazing panoramas of the coastline. And from October 7th to March 6th, Cadillac Mountain is the first place in the country where you can see the sun rise. Being there in late October, we awoke in the pitch dark (on vacation!) to make sunrise. And a few days later, we did the same thing at Otter Point, which is only seconds behind Cadillac Mountain in greeting the sun. Both were stunning.

For me, an additional highlight of these sunrises was that I experienced them wearing tefillin and wrapped in my tallit (and on Cadillac Mountain, with its gusty, frigid winds, tightly wrapped). I even made sure to begin reciting Shemoneh Esrei (the Eighteen Benedictions) at the exact moment when the top arc of the sun crossed the horizon. No, there wasn’t a minyan in either location, just me davening shacharit, but these were two of my most meaningful morning prayers ever. 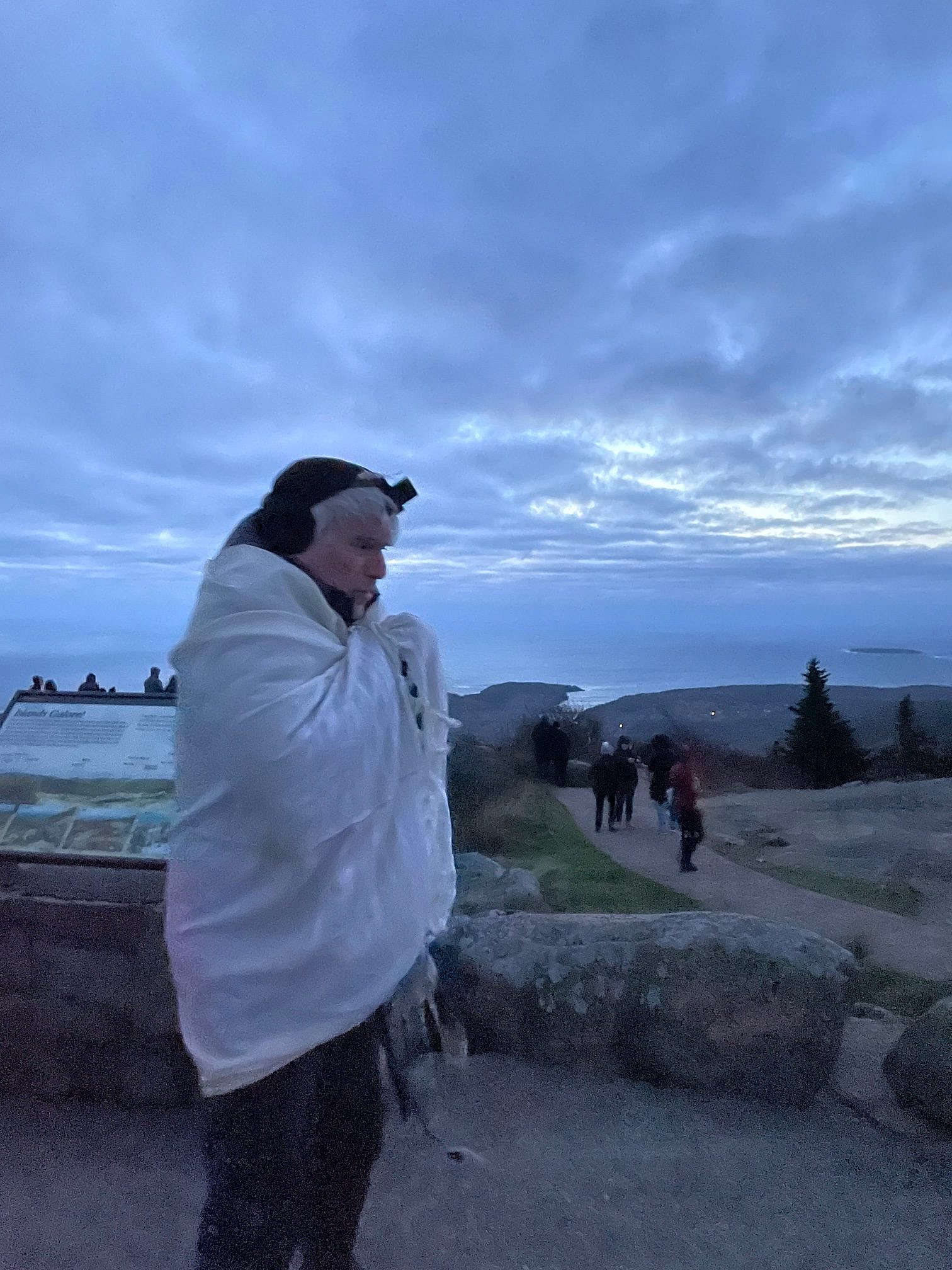 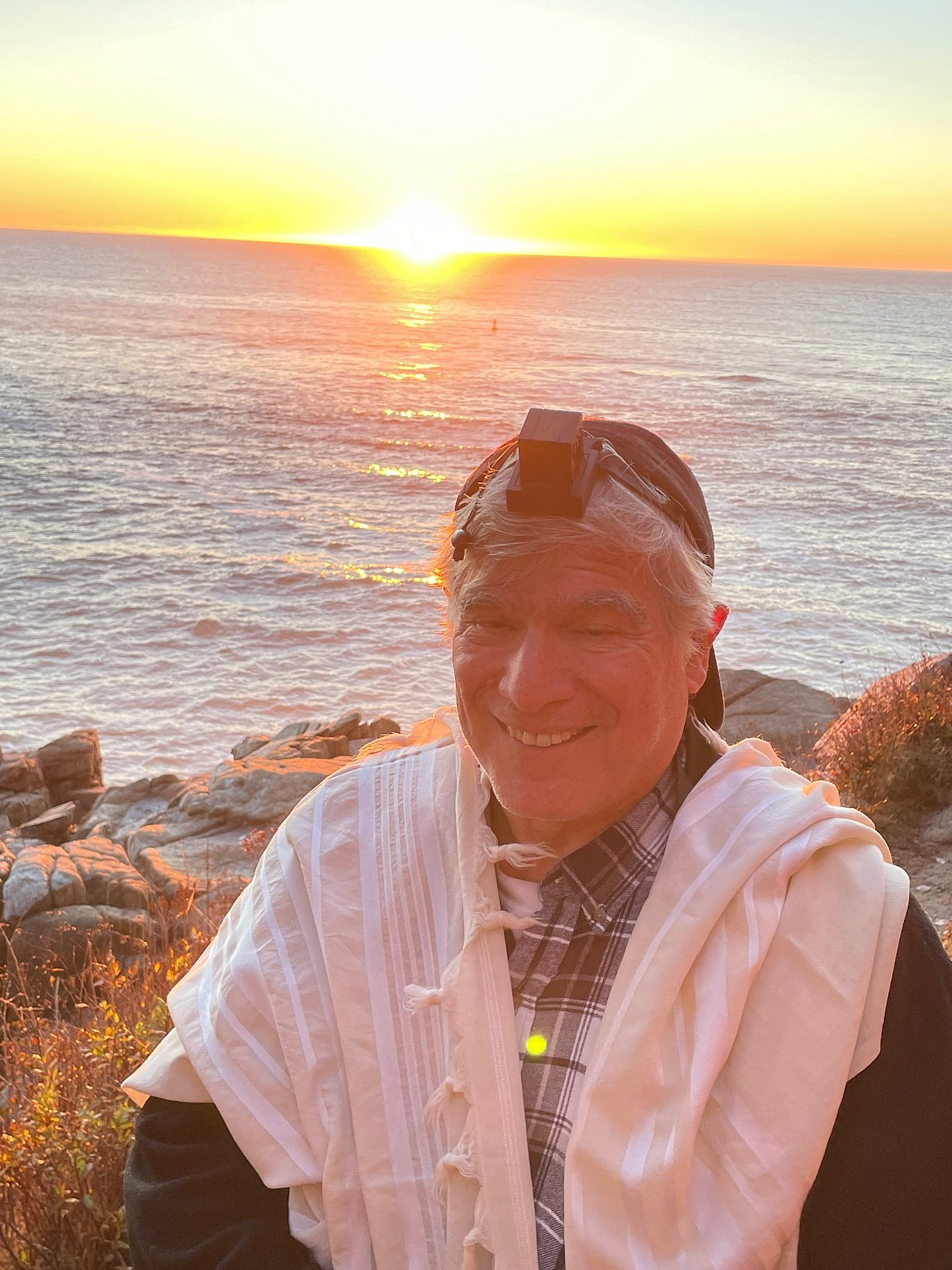 Magnificent vistas continued to pile one on another. There was sunset at Bass Harbor Head lighthouse (as impressive as the sunrises), Jordan Pond, Sand Beach, Echo Lake, Bubble Rock, Northeast Harbor, and more. And that’s just on Mount Desert Island (pronounced by the natives, we learned, as in ice cream and apple pie and not hot sand with no water), where Acadia is mainly located. An hour away is the Schoodic Peninsula, a separate, more rustic and less crowded part of Acadia, where we experienced yet more jaw-dropping seascapes.

There was also man-made beauty to complement the natural. Acadia has 17 stone-faced bridges (we explored nine), each unique in design, spanning streams, roads, cliffsides, and waterfalls, with Waterfalls Bridge a perfect merging of the natural and the man-made. These architecturally splendid bridges use native stone for their facing, which gives them a magnificent natural appearance. (They were partially designed, and fully financed, by John D. Rockefeller, Jr., who worked hard to remove some of the robber baron legacy from his sire’s name.)

Acadia even had a connection to my Beit Midrash of Teaneck Prophets class, where we’re studying the book of Joshua. One of the classes I missed studied the story of the miraculous stopping of the Jordan River told in Joshua 3:16, which allowed the Jewish people to cross on dry land to enter Canaan. Since the classes are recorded, I was able to listen to this one in our hotel, just hours after Sharon and I walked from Bar Harbor to nearby Bar Island. And how do you walk to a bridgeless island without the help of the hand of God, as with Joshua at the Jordan and Moses at the Red Sea? Well, twice a day during low tide, a sandbar appears in an area connecting the town and island; at high tide it’s covered by 10 feet of water. No miracle, but the juxtaposition of the class and our walk was, to me, freakish.

A favorite poetic couplet I still remember from Dr. David Fleisher’s Romantic poetry class at YU is the ending of Keats’s “Ode on a Grecian Urn”: “Beauty is truth, truth beauty,—that is all/Ye know on earth, and all ye need to know.” In the almost unending, all-encompassing beauty of Acadia, I was able to sense the presence of some unknown truth; perhaps the beginning of an insight into the Talmudic teaching that the seal of God is emet — truth.

But one thing is certain; in Acadia’s beauty we experienced, as Browning wrote in Fra Lippo Lippi, “the best thing God invents.”