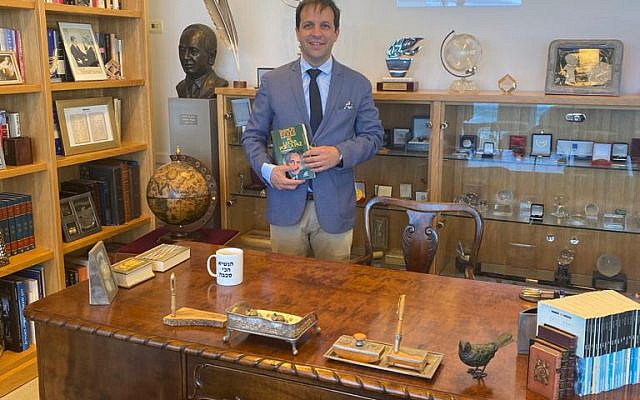 The Biden administration recently announced that the US president will visit the Middle East on 13-16 July, 2022. In particular, the president will visit Israel, Palestine (West Bank) and Saudi Arabia. In the context of this trip, this article pretends to reflect about this historic trip for the prospect of peace into the region, taking into account the past, present and possible future in the Middle East. A special reference will also be made to the Peres’ aspiration to peace which is the dream for many people in the Middle East.

The Jewish connection to the land of Israel is over 3,000-years long and, include a 1,000 years of a rich and thriving civilization. In this land, a significant part of the nation’s long history was enacted, of which the first thousand years are recorded in the Bible, Holy book in which its cultural, religious, and national identity was formed. This is not incompatible with the co-existence with Arabs in this sacred land since long time.

In accordance with the history and archaeological research, Moses lead Israelites from Egypt, followed by 40 years of wandering in the desert. He received the Torah, including the Ten Commandments, at Mount Sinai. Around 13th-12th centuries, Israelites were settled in the Land of Israel. Later, in c. 1020, the Jewish monarchy was established under Saul, the first king. And around c. 960, King Solomon built in Jerusalem the First Temple, the national and spiritual center of the Jewish people.

Located also in Jerusalem, Al-Aqsa Mosque is the third holiest site in Islam. Modern Muslims believe that Muhammad was transported from the Great Mosque of Mecca to this location during the Night Journey. Islamic tradition holds that Muhammad led prayers towards this site until the 16th or 17th month after his migration from Mecca to Medina.

Israel was born as a new State on 29 November, 1947.  The United Nations General Assembly Resolution 181 called for the establishment of two states for two peoples – Jewish and Arab – between the Mediterranean and the Jordan River, each fulfilling the national aspirations of its respective populations. The history shows that the Holocaust only accelerated this process in the understanding by the colonial powers that the Jews needed their own homeland and State. Nevertheless, this resolution was rejected by the local Arab population and the Arab States.

After the recognition by the United Nations, a devastating legacy of endless wars in the Middle East have cost thousands of lives and countless resources. Despite this global tragedy in terms of human cost from all sides, there has been also important peace landmarks, such as the Israel-Egypt Peace Treaty (1979) signed by the Prime Minister Menachem Begin and President Anwar Sadat or the Israel-Jordan Peace Treaty (1994) signed by Isaac Rabin, Shimon Peres and Yasser Arafat. Under the patronage of different US Presidencies, all these statesman displayed tireless efforts in achieving a peaceful solution of the conflict and thanks for their achievements, they were awarded with the Nobel Peace Prize.

Later, in August 2020 it was announced the Abraham Accords, which normalized diplomatic relations between the United Arab Emirates, Bahrain and Israel. The US administration again played a leading role as broker of the peace deal. The United Nations Secretary General Antonio Guterres applauded this initiative as an opportunity for advancing in the peace agenda. This historic accord put another stone in the endless aspiration of peace in the Middle East since the birth of Israel.

Nevertheless, the Israeli – Palestine conflict is still a pending issue to be settled through peaceful means and diplomatic negotiations. In this respect, some options were proposed by the Arabs in 2002, such as the Arab Peace Initiative. The initiative calls for an end to the conflict between Israel and the Palestinians and the normalization of relations between Israel and the entire Arab world. Although this initiative is not necessarily the outline for the final solution after 20 years since its enactment, it could help to identify some political actions in this regard.

This initiative came from then-Crown Prince Abdullah of Saudi Arabia, taking into account that conflict resolution, mediation and the promotion of friendly relations among nations through diplomacy has a long tradition in the Saudi foreign policy. As representative of the birthplace of Islam and the Custodian of the Two Holy Mosques, the Saudi leadership claims the role as the leader and mediator of the Islamic world.

We cannot change the past, but we can reshape the future. Young people and new generations have the opportunity to create a happier, better and vibrant future in the Middle East, in which Israel and Palestine can exercise its fundamental right to live in peace in light of the Security Council Resolution 242 (1967). As a pillar of the United Nations, the component of security for everyone, alongside human rights & development, is necessary to advance for a final solution to this painful and agonizing conflict.

In the context of the International Peace Day, on 22 September 2021 the Kingdom of Bahrain to the United Nations Office in Geneva on behalf of a group of States Bahrain, Israel, Morocco and United Arab Emirates & University for Peace (UPEACE) delivered in the United Nations Human Rights Council a Joint Oral Statement (JOS) on women, peace and diplomacy. The JOS is the first initiative led by this group of countries within the multilateral system and it happened at the United Nations in Geneva.

The new regional context can help to implement the Shimon Peres’ vision of a “New Middle East” that is based on cooperation rather the animosity. However, without a just and lasting deal to the Israeli Palestinian conflict peace will not be complete in this wonderful region. Peres teach the new generations that for complex problems, we need solutions based on empathy, partnerships, creativity and courage. He also underlined that peace needs determination, dedication and conviction. Let’s dream in BIG! Let’s dream on PEACE!