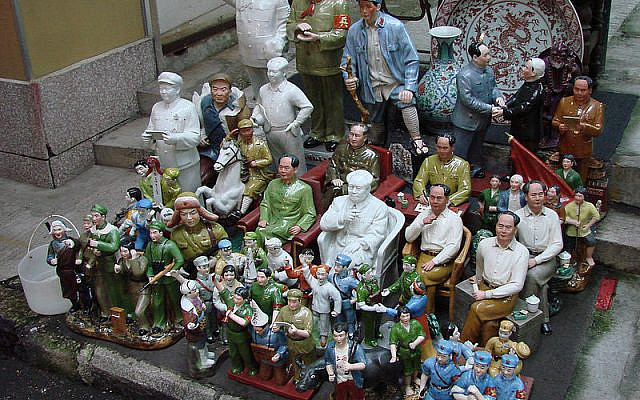 Mao’s China offered weapons, training and propaganda to Palestinian fighters. Israeli sources estimated the number of weapons supplied in the period 1965-1970 at 33 million dollars (at current value). By 1967, reported Shaina Oppenheimer in Haaretz, “the Palestinians were seemingly fighting almost exclusively with Chinese-made weaponry.” Mao’s China was the first non-Arab nation to establish relations with the PLO after its creation in 1964, and as early as March 1965 Ahmad Shukairi, the first head of the Palestinian national organization, traveled to Beijing. That same year, the Maoist regime began to commemorate Palestine Solidarity Day. Shukairi’s successor after 1968, Yasser Arafat, traveled to China no less than fourteen times between 1964-2001, to the point that “Chinese homes had become accustomed to images of Arafat on their televisions, stepping off a plane dressed in his trademark military uniform and kaffiyeh, ”Oppenheimer pointed out. However, by the time Mao died in 1976, Chinese support for the PLO had weakened considerably.

Also short-lived was the Maoist temptation in terms of ideas that excited the Palestinian cause. From 1972 onwards, Maoism crystallized as a trend within Palestinian groups, especially among those that repudiated the centralized structure of Fatah, preferring the Maoist concept of learning from the masses. Like the Chinese leader, they believed that the political leadership had to understand the concerns and conditions of the people on the ground in order for the total revolutionary spirit to emerge from it. They longed to unite the Arab-Palestinian masses on the Chinese model of a people’s war.

German scholar Manfred Sing offers an informative time travel to Palestinian Maoism in his 44-page monograph “Brothers in Arms: How Palestinian Maoists Turned Jihadists” in Die Welt Des Islams: International Journal for the Study of Modern Islam. In 1976 several Palestinian Maoists created their own organization, al-Sariya al-Tallabiya, in West Beirut. The following year it was renamed Katibat al-Jarmaq. As part of their Arab identity, they preferred to use the terms aj (brother) and ujt (sister) rather than rafiq or rafiqa (comrade). It attracted Palestinians and Lebanese — Christians, Muslims and Druze alike — as well as Iraqi communists and Iranian Marxists who had arrived in Lebanon to train in Fatah camps. Despite explicit ideological differences, the organization accepted them all.

Mao’s death in 1976 and the abandonment of the Cultural Revolution by his successors left a sense of ideological void among Palestinian Maoists. When three years later the Khomeinist revolution triumphed in Iran, several of them saw Islamic religious fundamentalism as the way to victory. Their attachment to popular union, armed struggle, mass mobilization and martyrdom remained unchanged; only that from then on these terms were understood in Islamic frames of reference.

As Manfred Sing has noted, the failure of the Cultural Revolution forced them to rethink their premises about Marxist-Leninist supremacy in the field of social, historical, ideological, and methodological knowledge. When Khomeini in 1980 postulated an “Islamic Cultural Revolution,” the temptation for several of them was impossible to suppress. Seeing that the Grand Ayatollah successfully mobilized the Iranian masses at the cry of Allah u Akbar against the Persian monarchy, they concluded that Islam could be a revolutionary instrument for the Arab and Palestinian people. “The idea that revolution was not possible without faith definitely forced them to back down and renounce their previous materialistic convictions,” Sing noted. They concluded that they had been prisoners of a foreign and erroneous revolutionary theory. “In the Arab countries the revolution will not be born with blond hair and blue eyes or with a yellow face and slitted eyes,” wrote the disenchanted Palestinian Maoist Munir Shafiq, “and whoever bears in his mind the Marxist option, has to go to Sweden, China or Vietnam.”

The passage from Maoism to Islamism was not digestible for all members of Katibat al-Jarmaq. Some left the battlefield and chose to spread their pro-Palestinian message through books and films. Those who traded Mao for Allah were able to do so by opening the prism of Maoist political violence to include Muslim religious values. The prophecy of final victory, once rooted in Marxist-Maoist inevitability, was now encapsulated in Islamic religious predestination. Sing emphasizes that this did not lead to a Maoist Islam or an Islamized Maoism, but to something else. In any case, Maoism was eventually abandoned by the Palestinian militants and today it is nothing more than a distant memory of one of the various ideological phases that the Palestinian revolution went through.