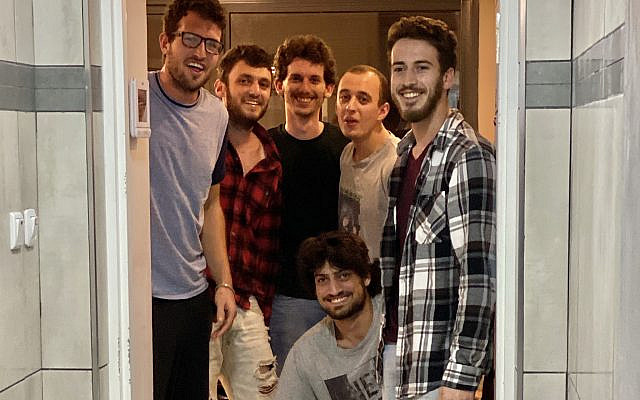 So we’re in a new normal. Of course today’s normal wasn’t yesterday’s normal and who know’s what tomorrow’s normal will be? But we’re rolling with it as best we can. ‘Rolling with it’ for us now means, in addition to all of the ever-changing rules and strictures imposed on all of us in Israel due to the Covid-19 coronavirus, making sure that my son and his five friends who have been quarantined together since their return from Bulgaria last week, have what they need. Even with all this, still the unexpected happened.

We wanted to bring some treats and good cheer to the six of them who were stuck in a beachside apartment in Ashkelon for the duration of their quarantine. As good as that may sound to many, seeing the beach from their window without being able to go near it for two whole weeks isn’t fun. To be honest, we weren’t going just to bring treats. My other kids were going stir crazy with all of the new (now old and in the past, but then new…) strictures and we were just happy to have a destination and a diversion. (Perhaps if their quarantine was in a less appealing location it would’ve been a harder sell for my kids…)

We gathered various groceries and other items but didn’t manage to purchase a case of beer in advance so we went to a store in Ashkelon to find some. Truth be told, we badly needed to use a restroom as well, and certainly couldn’t use the quarantined one in the apartment my son was in…

We went into the liquor store and found a young salesman with gloves on – happy to receive a customer, any customer. Though he did look a bit skeptical seeing a mom with her two kids. He seemed rather surprised when I told him I wanted a whole case of beer… and a bathroom.

I explained that the beer was for my son and five friends who were in quarantine, and we naturally couldn’t even enter their apartment, let alone use the facilities. He nodded in complete understanding, a bizarre symbol of the new reality we’re all facing together. 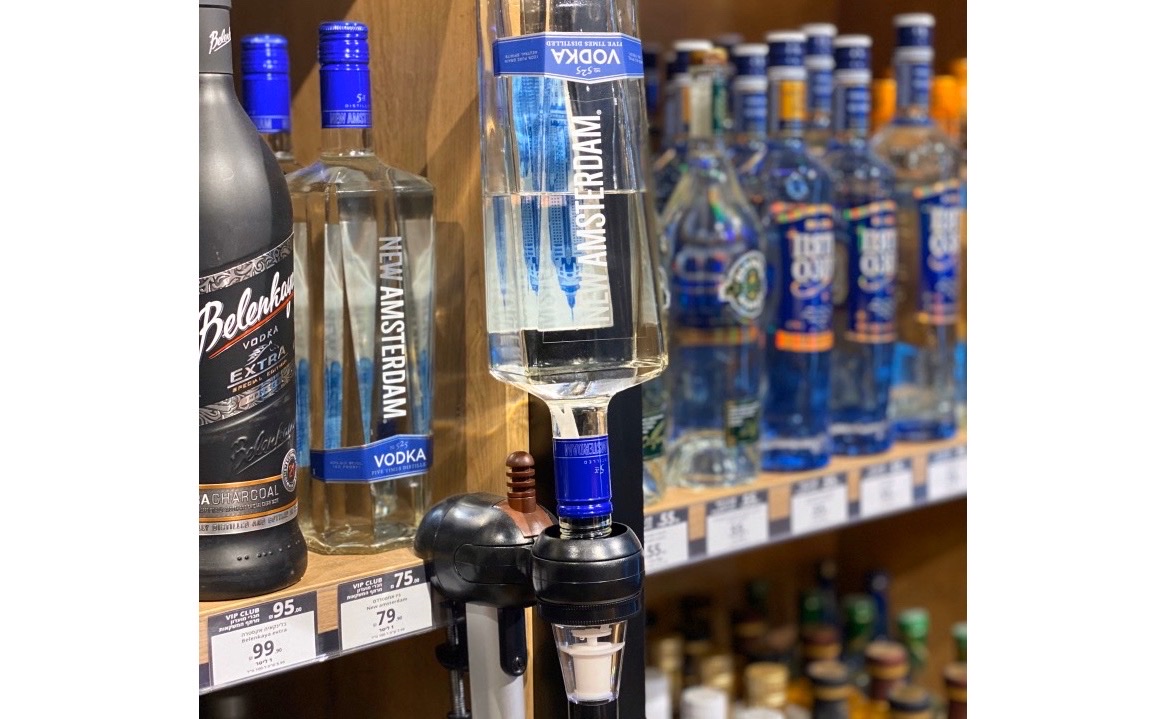 When they offered me some of this in the liquor store, we thought it was a fancy hand sanitizer. Credit: Laura Ben-David

He offered to bring me a case of Corona, now widely touted as either the beer you must get or the beer you should definitely not get…

We settled on some good old Israeli Goldstar. We all gratefully used their bathroom, then he pointed out a dispenser hanging conveniently in the main area. The label said “vodka“ and I thought that was a very clever label for alcohol gel in a liquor store. But no, it was actually just vodka. (I think I am onto something though and someone should do it… Think of the conversation piece! And much more attractive for a living room.) 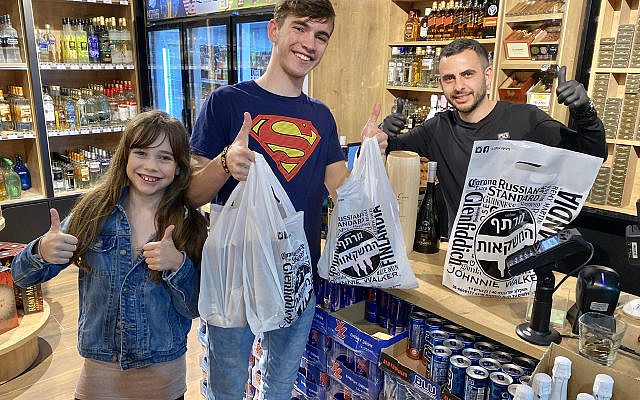 All set! Twenty-four beers should hold them for at least a few days…

As we were bringing the beer and other treats back to the apartment, my 16-year-old was setting up his headphones and Zoom on his phone, as his 11th grade class was about to start a virtual coronavirus-era lesson with their teacher. It was almost too much, all of this newness and strangeness at once.

We placed the items near the door, knocked, and, like kids playing a prank, dashed away (at least five meters away!) and waited for the guys to open the door. They were all smiles and waves, grateful for the brief connection with the outside world, loved ones, treats, and, of course, a case of beer. 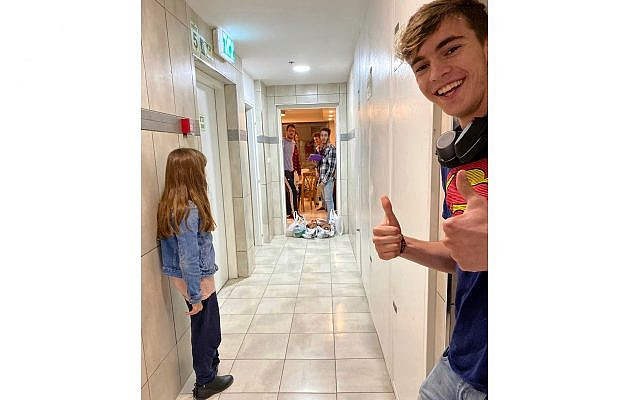 There was a feeling of over-cautiousness, After all, they had been traveling in a country with next to no cases of coronavirus at the time, and went straight into quarantine immediately upon their return. Clearly they were very low risk. And yet we followed protocol as required. 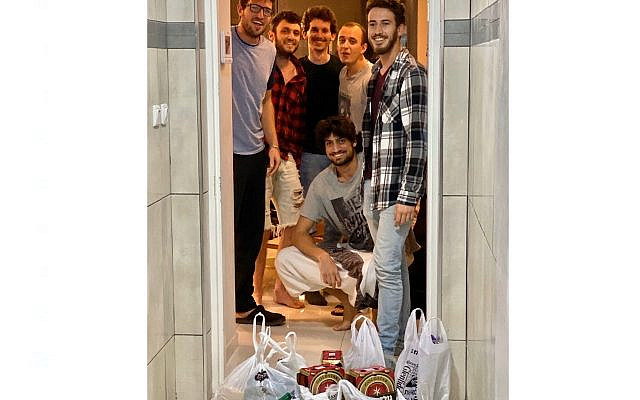 It was therefore with utter shock that we discovered, an hour after we left, that one of them had tested positive for Covid-19, the virus that has basically upended the world.

For us, the sh*t had gotten absolutely real…

My doctor friend reassured me that before long 70% of the world will have caught it; this is just the tip of the iceberg. But still it’s quite scary to be in the center of it all, while Israel is still counting and listing every single patient. Not to mention being way too aware of the grim reality coming out of Italy and other places.

So we’re now waiting for the rest of the boys, my son included, to be tested and get results. But we figure it’s inevitable that they’ll all have it. We’ve now been told that their quarantine should have each been individual and not a two week frat party. But what did we know? It sounded like a good idea at the time. And logistically would have been near-impossible to keep them fully away from family members had they stayed home.

We realize that our boys are low-risk as they are young, fit, healthy… Naturally it is way more of a concern for those who are older, ill, and/or immunocompromised. But with the news overload, the fear and all the precautions, being part of the statistics isn’t fun at all.

But what can we say? We’re in a new normal. We’re navigating it all as best we can. Trying to adapt. Going with the flow. Protecting our loved ones and trying to stay healthy. Preparing for the unexpected. Keeping our sense of humor. And hopefully keeping our heads above water until this blows over.

We will get through this. Together. We’re resilient. Let’s follow the rules and requirements as laid out by our health ministries and governments, difficult as they may be. We can use this time as an opportunity to slow down, appreciate our families and loved ones, even learn something new. We might even find here a bit of a blessing in disguise…