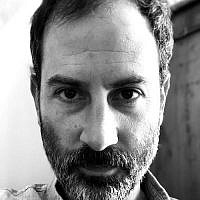 The Blogs
Daniel Levitt
Apply for a Blog
Advertisement
Please note that the posts on The Blogs are contributed by third parties. The opinions, facts and any media content in them are presented solely by the authors, and neither The Times of Israel nor its partners assume any responsibility for them. Please contact us in case of abuse. In case of abuse,
Report this post.

On a recent visit to Israel, I spent Shabbat in Jerusalem experiencing the city on a local level and having the chance to pray at two incredibly humble synagogues. Coming from a city in the diaspora where shuls are structured and managed through professional processes, the experience of these free spirited houses of prayer was refreshing and naturally inspiring.

For millennia , the house of prayer has been the bedrock of Jewish faith. A binyan (building) which has witnessed all aspects of our collective lives. Our history as a people has forever found expression in the four walls of a shul. Its sacred entity has protected the Jewish peoplehood – if not our physical bodies, certainly our spiritual being. Its simplicity is what, perhaps, has been the driving force of the eternal continuity of our people. Where tears flow, miracles occur. In account of the suffering of our generations, there has been no other place in the world that has gathered our shared tears then that of our holy houses of worship.

The very same edifices have bared witness to extreme suffering. The great teachers and masters of our biblical blueprint who have carried the spiritual weight of their generations, leaders who have fought for the freedom of our lives as a people, their blood spilled on the floors of our holy places. The grandeur and magnificence of the great synagogues throughout Europe and the Middle East as well as the most modest, their unique structures burnt to the ground. The thousands of books, scripts and holy torah scrolls lost to the plague of antisemitism that has knocked on the doors for thousands of years. The destruction of the great Temples, the Beit Hamikdash, whose presence symbolised the independence of Jewish life, statehood and the self determination of a belief system, our faith and our future as a nation. Their destruction brought us into exile, each of which threw us into the depths of the world, wanderers, reliant on the decisions of leaders, of monarchs and tyrants, dictators and governments whose obsession for the demise of our people overrode their responsibilities to their own. Our prayers remained with us.

With the miracles that have hugged the paths of our journey, houses of prayer have always re-emerged – in secret and in public celebration – to continue the chapters of Jewish life. They have become home to the kabbalists who reached out to the heavens on behalf of the nation, they have housed rebellions against our modern enemies in our pursuit of independence and freedom, they’ve become the vessels which guide the songs of our prayers and the impactful tunes of King David’s psalms. Most graciously, the revelation of a modern day miracle, the reunification of our people with the Kotel Hamaaravi, the Western Wall, a central hub of Jewish life and the largest – both in physical and spiritual terms – house of prayer. The Kotel is a unique example of how the simplicity of its holy place provides the most significant and life changing platforms for pure prayer and contemplation. A place to pour out the soul and to chase the doors of heaven, its wall of ancient stones has formed a conduit between people and G-d, the bond of a nation encapsulated and magnified, our tunes amplified and lifted for all to hear, our tears gathered to form an everlasting affinity with the pain and the joys of a nation.

Now, our synagogues have again been distanced from the people’s prayers, this time a sense of comfort that their doors will open again soon. Our generation has not witnessed an enforced separation before and it certainly provides a new appreciation for the freedom of prayer. But more than appreciation, this is an opportunity to ignite the power that is hidden in the simplicity of prayer itself. Here in the diaspora our communities are often centralised around larger synagogues creating the need for structures around their management with committees and subcommittees, treasuries and infrastructure to manage memberships, staff to prepare food and maintenance teams for the building itself. These are all necessary but with committees comes politics and with large infrastructure comes heavy expectation, easily disbanding the simplicity of a house of prayer and diverting focus on details irrelevant to the utterances of our holy verses.

Of course large synagogues are a beautiful and core part of Jewish life especially in the diaspora where a unified community can be the driving force of a Jewish future. What we have witnessed from this most threatening episode of our modern history is that with all the infrastructure and funding available, with the teams and committees, the only true aspect of the synagogue that remains with us now is the simplicity of prayer itself.

The Baal Shem Tov, founder of the chassidic movement, championed the rights of simple folk. He would travel from town to town bringing inspiration to people who were disregarded due to their lack of education, wealth or sophistication. Throughout his journeys, he would witness the universal impact of the simple prayers flowing through the lips of the destitute. While the enlightened and cultured of the community would go by their days improving in their own ability and personal growth, the simple folk would harness the strength behind their suffering and create spiritual masterpieces on behalf of their entire people.

Soon the doors to our world will reopen and with it renewed access to houses of prayer. I think back to the stirring experience on the cobble streets of nachlaot in Jerusalem, my soul heightened by the people, accessibility, the depth of melody. Now I realise that one of the many life changing lessons to hold onto in this unprecedented time is the unique gift of prayer in its most simple and beautiful form.

About the Author
Daniel has held various roles in Jewish organizations and, in between, pursues entrepreneurial and creative interests. He believes deeply in Jewish peoplehood.
Related Topics
Related Posts
Daniel Levitt
Comments