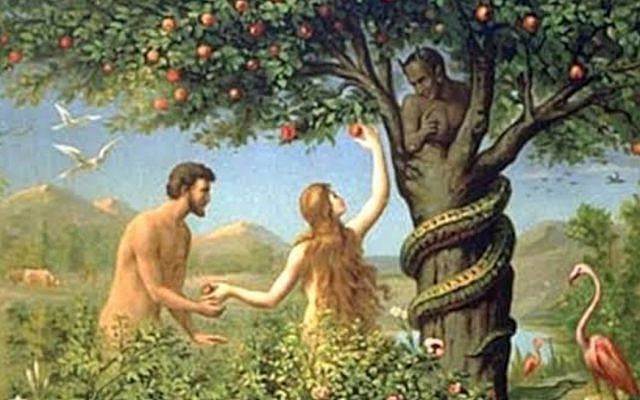 Detail from Original Sin, Adam and Eve in The Garden Of Eden, late c. 19th. (Twitter)

And the serpent was the most clever of all the beasts of the field that Hashem, God, had made, and he said to the woman, “Is it that God said, ‘Don’t eat from any tree of the field’?” (Genesis 3:1)

“And the serpent…said to the woman.”

A talking serpent is perhaps not the most difficult piece of the broader Creation/Eden story, but it certainly calls for some explanation.

Abarbanel professes dissatisfaction with all three approaches: the first flies in the face of nature; the second lacks substance; the third denies peshat (which I will loosely translate as the straightforward meaning of the text), “and I have already informed you that it is inappropriate to deny a story, in its entirety, to which the peshat of the Torah text attests.”

Abarbanel does not reject the idea that an animal could speak, but he does expect that the Torah would make note of such a phenomenon if it had happened, just as it does in the story of Balaam.

How, then, are we to understand the verses that describe a dialogue between the serpent and (the woman who would later be named) Eve?

Rather… she saw the serpent, that he was going up in the Tree of Knowledge and eating of its fruits, time after time, and he wasn’t dying and wasn’t harmed in any way. And the woman thought about this and analyzed within herself, as if she were speaking with the serpent – and that he, by going up in the tree and by eating its fruits, was saying to her, “You will not die.” So she, in her thoughts, responded to this.

In this brilliant manner, Abarbanel preserves the existence of a literal serpent who influenced Eve’s choice to eat from the fruit without denying serpentine traits, such as the lack of human speech, that he sees as essential elements of serpenthood from the beginning of creation. (Or at least, he thinks that if the serpent had changed so fundamentally as a result of this incident, the Torah would have told us so more explicitly.) Eve did see a serpent, but it didn’t speak; instead, she observed and paid attention and thought about what she saw.

After all, actions speak louder than words; the meaning attributed to the serpent could have been conveyed just as clearly by his actions, as interpreted by Eve, as by literal words.

Lest we doubt that the Torah would use the word “said” in this metaphorical sense, Abarbanel offers a number of prooftexts in which animals, earth, and the depths of the sea are described as proclaiming various truths.

“And it is known that these things do not possess intellect and do not speak… Rather, out of their actions, when people study them, they speak.”

Anything can “speak” if we pay attention – even a snake that simply goes about its business of slithering and eating. Actions speak louder than words, and their meaning lies in the eye, and mind, of the beholder. We can make meaning from what we see just as we can from what we hear.

Abarbanel supports his contention with a detailed analysis of the text. For instance, he argues that the serpent’s stated “cleverness” lay in slithering up a tree to eat good fruit – unlike other “beasts of the field” who stuck with what they could reach from the ground. This, says Abarbanel, is why Scripture contrasts the serpent only to beasts of the field, but not to birds (who might also eat from trees) or to Adam (whose cleverness is a matter of intellect and speech). He also notes that we are not told “the woman listened to the serpent,” as is often the phrasing when someone in the Bible is convinced by another’s words, but “and the woman saw that the tree was good to eat” (ibid. 6): there were no words to listen to, but there was much to see and deduce.

To Abarbanel, this textual detail constitutes “clear testimony” to support his approach, while other commentators have their work cut out for them explaining how she could have “seen” this about the tree before ever sampling it. A further proof is found in the fact that God gives Adam and Eve the chance to explain their actions, but does not similarly ask the serpent, “What is this that you did?” – “because [the serpent] did not have intellect.” Of course, one has to then explain why the serpent would be cursed, and Abarbanel does that too, pointing to cases in which the Torah mandates killing an animal because of close association with human sin.

All of these points, of course, are subject to disagreement – which brings us to perhaps the most beautiful aspect of Abarbanel’s view of the serpent.

It is not just the creativity, or the clever twists on certain words, or the way certain details fall into place so beautifully – though I am enamored with all of that. What I find truly amazing about Abarbanel’s interpretation is the way his actions, too, speak louder than words.

This passage in Abarbanel’s commentary stands out as a shining example of the notion of shivim panim la’Torah, that the Torah has “70 faces” — signifying many different possible interpretations — and some of the factors that play into those possibilities.

Abarbanel rejects the first approach, in which the serpent was originally a different kind of animal, because it contradicts nature as we know it – yet he too, in explaining the serpent’s curse, says God changed certain aspects of serpentine nature. Why accept that God altered the way serpents eat, but not that He removed their original capacity for speech?

He rejects the second approach, that the serpent was really a physical manifestation of “Satan,” on apparently philosophical grounds – but must contend with philosophical challenges within his own approach.

And the third approach, that the whole thing is an allegory, is too far removed from peshat for Abarbanel – yet he is perfectly happy to read the word “spoke” in a metaphorical sense.

If he were around to discuss it with us, Abarbanel might offer detailed guidelines for biblical interpretation that would explain why he finds his approach more compelling than the others – and indeed, a fuller study of his commentary can fill in some of that nuance. But ultimately, there seems to be an element of subjectivity in biblical interpretation as well that simply leads one person to prefer approach A, another to reject A in favor of B, and still another to argue for ZZR. (Do the math.)

To be sure, there are parameters that guide which interpretations fall in or out of the pale, but there is abundant space within those parameters and, to some degree, in defining and applying them. This is the beauty of the biblical text, that Abarbanel’s action – the act of offering a stunningly creative interpretation and tying it carefully to the text, weighing and fitting together multiple puzzle pieces – conveys so well.

Not everyone will look at the story in Genesis, chapter 3 and see what Abarbanel sees, just as perhaps not everyone would have observed a serpent in a tree and come to the same conclusions that Abarbanel believes led to Eve’s sin.

And just as we might imagine that Eve could observe a serpent and hear it “speak,” there is so much that each of us can hear from the Torah’s text, if we pay attention.

About the Author
Sarah Rudolph is a Jewish educator and freelance writer. She has been sharing her passion for Jewish texts of all kinds for over 15 years, with students of all ages. Sarah's essays have been published in a variety of internet and print media, including Times of Israel, Kveller, Jewish Action, OU Life, Lehrhaus, and more, and she serves as Editor-At-Large, Deracheha: womenandmitzvot.org. Sarah lives in Ohio with her husband and four children, but is privileged to learn online with students all over the world through WebYeshiva.org and TorahTutors.org.
Related Topics
Related Posts
Comments