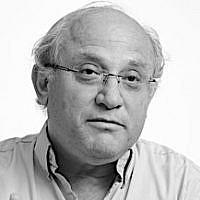 The Blogs
Avi Sagi
Apply for a Blog
Please note that the posts on The Blogs are contributed by third parties. The opinions, facts and any media content in them are presented solely by the authors, and neither The Times of Israel nor its partners assume any responsibility for them. Please contact us in case of abuse. In case of abuse,
Report this post.

This precedence has a political dimension too. The state, at least the democratic state, rests on a contract with a citizenry that endows it with legitimacy and determines the borders of its sovereignty. The civic community living here in Israel renounces some of the interests specific to each of its components in order to maximize the realization of the shared significant interests. But Israeli citizens never renounced their fundamental rights as humans and as Jews; they did not entrust their Judaism to the state.

The State of Israel is not only a democratic state, it is a secular and liberal state. It is founded on human sovereignty, not on the sovereignty of God or of Halakhah. Individuals living in it are allowed to believe that the State of Israel is the realization of a divine promise and they are also allowed to deny this; they are allowed to observe Halakhah or to have reservations about it. Whatever they choose to do does not matter since Israel is a secular state.

Moreover, Israel was established as a liberal state ensuring a maximum of liberties for all. Rather than denying its character as a Jewish state, this liberalism ensures that the State of Israel will not prohibit anyone, including Jews, the realization of their identity and their different Jewish values. The only guarantee of a pluralistic Jewish existence is the liberal umbrella, under which Haredim and religious-Zionists also take cover. And yet, it is they who now lead those demanding from other Jews to renounce the fullness of their Jewish identity and to acknowledge them as the only bearers of “Judaism.” Invoking this Judaism, it is they who now demand to negate the Jewish identity of others. Regrettably, the government of Israel allows them to do this.

It is the right of individuals and of nations to constitute their identity and shape it at will; their identity is their concern, not the concern of the sovereign. Only in totalitarian states does the sovereign constitute identity. The basic distinction between identity and identification clarifies this well: identification is an act that an individual or a social body does to another, and serves various classification purposes. Not every identification is legitimate. Often, the identification “Jew,” “woman,” “black,” “Arab,” or “lesbian” is meant to exclude, to create a hierarchy and to cause harm. A state is allowed to perform some identification acts, so long as they are meant for appropriate civic purposes and pass the test of morality and justice. But a democratic-liberal state is not allowed to constitute the identity of its citizens, a right exclusively preserved for the individuals themselves. Only they can shape their world autonomously. The identity of individuals is created through the story of their actual lives and not through the sovereign. A state that invades the identity domain violates its own legitimacy since it breaches its founding civic contract.

Israel has offended most particularly the historical memory and the consciousness of Diaspora Jews in all that concerns the attachment to the Kotel. It has entrusted Jewish memory to Orthodox rabbis who deny the Judaism of those who are not Orthodox, who are meant to express their Jewish and religious yearnings only in the mode dictated by these rabbis. Orthodox Jews have a right to believe whatever they believe, including that they are the “true” bearers of “Judaism.” The State of Israel, however, as the state of the entire Jewish people, is not allowed to grant these rabbis the right to deny the diversity of Jewish identities, including religious ones, and choose one mode of Jewish existence as the only legitimate one. The Kotel has become the exclusion space of world Jewry, and Israel now excludes world Jewry from one of the locations most significant to Jewish memory.

In a process now ongoing, the State of Israel has assumed the right to determine the nature of Jewish identity and the meaning of belongingness to the Jewish people. Thereby, Israel harms the three elements at the basis of its existence. First — it denies the precedence of the citizenry to the state. Second — it infringes the legitimacy it was granted by the nations of the world, which recognized the right to self-determination. This right was granted to the Jewish people in all its manifestations and Israel uses this legitimization to constitute a new Jewish people different from the actual one. Finally, despite its historical commitment, Israel ceases to be a home to the entire Jewish people, who are increasingly detached from the state they view as betraying them and their values.

We are told that only the Torah preserved the Jewish people. Imposing Halakhah, therefore, reflects a deep concern for Jewish continuity and is meant to prevent assimilation. This is a bogus claim.

First, the breach of rights and the harm inflicted on Jewish identity and nationality cannot be justified on factual grounds, which could be true or false. Indeed, it is plausible that it was not Halakhah that preserved the Jews, but rather the will of Jews to continue their Jewish religious existence together with their isolation. When the ghetto doors opened up, the Jews were exposed to alternative and neutral possibilities of existence and they proceeded to assimilate. Had not Zionism stood in the breach, it is hard to venture what would have remained of the Jewish people. The Torah did not curb this move because only the will of a free subject can, if at all, brake historical processes.

About the Author
Prof. Avi Sagi is academic director of the Military Ethics Research Team and a senior research fellow at Shalom Hartman Institute. Prof. Sagi is the founding director of Bar-Ilan University's Program for Hermeneutic and Cultural Studies and a member of the steering committee for the preparation of the Israel Defense Forces code of ethics.
Related Topics
Related Posts
Comments
Advertisement