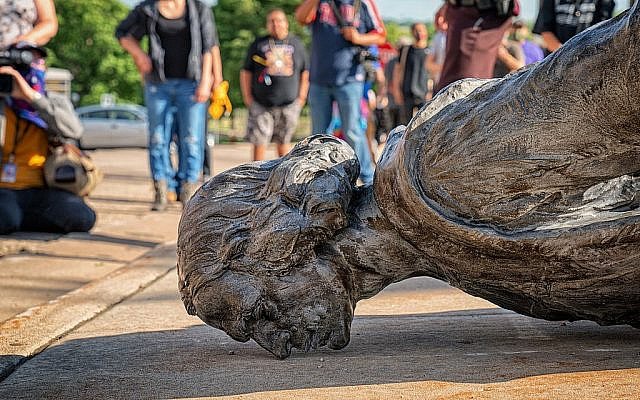 The fallen Christopher Columbus statue outside the Minnesota State Capitol after a group led by American Indian Movement members tore it down in St. Paul, Minnesota, on June 10, 2020. Photo by Tony Webster.

Jefferson Davis in Richmond; Edward Colson in Bristol, England; Albert Pike in Washington, DC; Christopher Columbus here in Wooster Square (and many other cities)… Ulysses Grant and Francis Scott Key in San Francisco; Theodore Roosevelt in the Museum of Natural History in New York. Dozens of statues across America (and the world) are toppled from their pedestals; some by the ropes of protesters, others by cranes (Roosevelt’s removal has been announced, but not accomplished). This wave of iconoclasm did not begin in the wake of the video of George Floyd’s murder: protesters removed Silent Sam from UNC-Chapel Hill in 2018; debate erupted at Princeton in 2016 over renaming the Woodrow Wilson School; Yale’s multi-year deliberations over the name of Calhoun – now Grace Hopper – College began in 2015.

As the downfall of statues has spread and accelerated in recent weeks, the question of how far this revaluation of history should extend – or, on which principles statues should be retained or removed – has grown urgent. Some Jewish commentators responded by cutely deploying the Jewish tradition of aniconism (variants of “Abraham was the original idol-smasher” were widespread on Twitter last week) – but this is out of focus. The contested terrain includes the names of buildings and institutions (Princeton’s Woodrow Wilson School, Yale’s Calhoun College; conversely, NASA’s decision this week to name its headquarters after Mary Jackson) and holidays (statutory days of Confederate memorial are observed in Alabama, Mississippi, South Carolina, Texas, and Tennessee). The real question is the construction and preservation of shared memory. And, as Yosef Hayyim Yerushalmi put so piercingly in Zakhor, shared memory is not cognitive so much as emotional: not what facts do we recall, but whom do we revere as heroes and revile as traitors? Keeping or removing a statue is a debate not about what facts citizens should know so much as about in whom and what we should take pride – and shame. This is the kind of memory instilled at a Passover seder, not recalled on a multiple-choice test.

A clear and narrow standard that should command universal assent – no memorials to Confederates – has yielded to broader, less stable criteria – a figure’s avowed racism, support of slavery, and even the choices of the sculptor, which can diverge from the standard interpretation of the depicted character’s legacy. We are right to train our critical lens not only those who fought to destroy the Union but also those who created and preserved our institutions, but in so doing wove racism, sexism, and colonialism ever-deeper into the fabric of our society – and inflicted the wounds today’s protests are working to bind. Our broadening of critical scope grows out of a necessary, and painful, rejection of the self-serving lie that racism is confined to other places or times.

And – how far? Ulysses Grant? Elihu Yale, slave-trader? James Madison, the slave-holder? What past will our children revere? Will they be able to draw inspiration from those who came before, and to aspire to greatness like the founders of the disciplines and institutions that have given shape to our lives? Are we setting a bar of purity that we ourselves could never meet? For some these are rhetorical questions meant as counterarguments, for others they express the beginning of a long-overdue reckoning. The former group has used the word ‘Bolsheviks’ more in the past week than I have heard over the past decade to marshal a cautionary precedent for the radical, sudden overthrow of the past, even an oppressive one.

Somehow, we have reached a moment where some of those I trust fear that America’s reckoning with its racial legacy is going too far, too fast; many others, myself included, are clear that we have barely begun the work of repair. The latter is certainly true; the former may be as well. And this possibility of paradox deserves our attention.

No one in the Jewish tradition grasped that the most profound truths can only be expressed through contradiction – real or apparent – than Maimonides. From the taxonomy of contradictions with which he opens the Guide to the traditional yeshiva method of studying his legal works, where the analysis cannot begin in earnest until a contradiction has been found – Maimonides made contradictions like the one we face Americans may be facing into the rule, not the exception.

His laws of repentance – which have proved endlessly generative as a theological and political framework for our American moment – gives exceptionally clear voice to both the redemptive potential of today’s far-reaching reassessment of American history and to its destructive possibilities.

In chapter two, Maimonides sets a high bar for penitents. A complete and honest personal reckoning of sins – and even a total cessation of them – while no small feat, is merely the beginning of repentance. The crucial – and excruciating – step that follows is for a penitent to remake his social identity as a penitent, broadcasting his past sins to anyone who will listen. This is exceedingly rare, because it is humiliating:

It is greatly praised when a penitent publicly confesses by making her misdeeds widely known and revealing to others how she has wronged someone. She should say, “I sinned against so-and-so, and this is what I did to him. But today I repent, and regret my actions.”

But anyone who is prideful, and rather than making known his misdeeds conceals them – he has not fully repented, as it says (Proverbs 28:13), “Those who conceal their misdeeds will not prosper.”

Maimonides realizes that our need to project a positive self-image to others is a major obstacle to far-reaching change. He demands that we instead cultivate a darker picture of ourselves for private and public consumption alike. In the adjacent sentences, Maimonides describes the antidote to this prideful stubbornness:

A penitent changes his name, as if to say, “I am no longer the same person who did that.” And he should improve all of his deeds, and depart into exile, because exile atones for transgressions by humbling a person, making him meek and low-spirited.

Repentance, for Maimonides, is a complete reworking of one’s life in light of the crushing realization of how tragically and vastly we have failed in the past – and the weaving of this change into every aspect of our present and future selves. This is why the standard is “improve[ment of] all of his deeds” – a complete, unsparing revision of a life, not merely a localized change confined to the particular area of failing. Statues celebrating the past instill a sense of continuity and pride that poses a stumbling-block to such a large-scale revision. In fact, applying the paradigm to the United States, Maimonides makes a scandalous suggestion: this country should change its name to mark the complete rejection of the slavery enshrined in its founding. The thought makes one tremble – perhaps with fear, excitement, or horror, or all of them together.

But Maimonides is fundamentally a dialectical thinker, and a psychologically astute one at that. He knows that repentance is stalked by the specter of self-hatred, and that an earnest desire for self-transformation can be harnessed to a darker compulsion for self-destruction. And so in the next chapter he pivots, demanding that every person – penitents included – hold fast to her past accomplishments and sacrifices, resisting the temptation to diminish the value of her past actions:

Anyone who regrets the good deeds that she has done and questions her own meritorious acts, saying to herself, ‘What did I accomplish through them; I wish I had never done them’ – loses all of them, and no merit whatsoever is associated with her, as it says, “The righteousness of the righteous will not save them on the day of their wickedness” (Ezekiel 33:12) – this is when a person questions her past.

The existential situation depicted by Maimonides here – that our merit is constituted not by the mere fact of our past actions, but by our ongoing recognition of the goodness of those actions – is ennobling and terrifying all at once. Ennobling because it captures the power of memory – as pride – to keep past heroism and sacrifice alive in the present as an inspiration for the future. And terrifying because it places a great burden on our memory, demanding that we search the past not only to uproot every evil, but also to memorialize every triumph.

This positive requirement departs from all of Maimonides’s other writings on repentance. Everywhere else, Maimonides sets repentance as a positive good, delineating its degrees and minimum threshold. But here, Maimonides recognizes that there is something that is psychically – and perhaps politically – indistinguishable from repentance, and which must be recognized as a temptation to be steadfastly resisted. In so doing, Maimonides forces us to take a critical stance towards all claims of repentance, asking whether the revaluation of values is in fact correct, for if it is not, the consequences will be disastrous. Repentance is, in some sense, no longer ‘good’, it is merely a force with the power to remake lives, and through them the world: like all forces of this magnitude, it holds the power to create and destroy in equal measure.

In prizing the memory of the past’s triumphs, Maimonides’s second account of repentance makes clear the poverty of a present that cannot take pride in its past. It is not that we may forget history, but that it may lose its capacity to inspire us. Alienated, we would be without past heroisms, creations, or sacrifices to inspire and guide us. A people who has decided it has no one and nothing worth memorializing – in statues, in holidays, and in the names of institutions – has, in a sense, destroyed not only their past, but also themselves.

This vast and treacherous chasm – the imperative and the pitfalls of thoroughgoing repentance – is how Maimonides may have us conceive of our American present, non-Confederate statues and all. There are specific methods for reducing the tension as it flares: memorializing great figures who have been sidelined from collective memory precisely because of their race or their anti-racist advocacy; developing well-grounded criteria for who and what should be valorized; and public processes of deliberation that allow divergent viewpoints to inform one another are some of the most promising. We need all of these – and yet, the basic fear, that we are going too far or not far enough – or perhaps both – will not be allayed, because it cannot be. No one, and no One, will step in to reveal to us whether we have judged the past correctly. And so we have only the comfort that our decisions are not final: in a generation, others will build new monuments, perhaps they will rebuild old ones – and they will almost certainly tear down some of ours. And they may even be right.

About the Author
Jason Rubenstein is the Howard M. Holtzmann Jewish Chaplain at Yale, and the senior rabbi of the Joseph Slifka Center for Jewish Life at Yale. All opinions expressed here are his own.
Related Topics
Related Posts
Comments