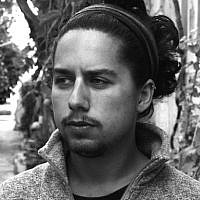 The Blogs
Ariel Brodkey
Apply for a Blog
Please note that the posts on The Blogs are contributed by third parties. The opinions, facts and any media content in them are presented solely by the authors, and neither The Times of Israel nor its partners assume any responsibility for them. Please contact us in case of abuse. In case of abuse,
Report this post.

There seems to be a general consensus among rational observers regarding the events and security measures on the Temple Mount. Given the violent attack that claimed the lives of two Israeli police officers was perpetrated with sub-machine guns, a handgun, and a knife, it stands to reason that metal detectors are warranted in the prevention of another attack of this kind.

The people who generally stand in opposition to this procedural change in entering the holy site are espousing the same claims they always make, meaning one of two arguments. The first is the obvious one that most Palestinians make, namely that Israel has no legitimacy in the administration of the Temple Mount in the first place and is simply trying to appropriate or ‘Judaize’ a Muslim site. The second argument stems from the idea that unilateral security measures instituted by Israel exacerbate tension and Palestinian resentment, therefore perpetuating conflict instead of quelling it.

In response to these accusations the answer always seems to be the same, regardless of political persuasion, “we are not changing the status quo.” Security officials say it, activists and advocates say it, politicians and diplomats say it, but the worst part about it is the fact that they actually mean it. They are not acting in a conspiracy to limit Palestinian worshippers, and they are not attempting to ‘Judaize’ the Temple Mount, they are simply dancing around an issue of supreme importance and making minor changes where a real assessment and overhaul is needed. “We are not changing the status quo” means something very specific that should bother everyone who cares about Israel. It means that ‘we are comfortable with the situation on the Temple Mount the way it is,’ when in fact we should be appalled and ashamed.

The Temple Mount is the holiest site in the holy land, meaning it is a global focal point, not only from a theological perspective, but a sociological and political perspective as well. It is one of the images most associated with Israel abroad, and as such any event that transpires there has not only local or regional effects, but it also impacts the court of public opinion and policy analysis globally. This 36-acre plot is literally a stage, and since the war of 1967 the world has been watching the drama unfolding on it with angst.

Since it came under Israeli control everyone has been watching and analyzing how the Israeli political ethos would manifest itself on this site. How would notions of the Jewish character of the state affect worship patterns? How would the liberal-democratic nature of the state influence the administration of the site? The answer to both of these questions shows that whether you think Israel is primarily Jewish, or primarily a liberal democracy, this status quo that everyone is so quick to defend, is in fact reprehensible.

When you ask someone the question do you think Israel is primarily a Jewish or democratic state, they usually say it’s definitively one, the other, or some combination of the two. This issue has divided the Israeli political ethos since before its inception. From both of these standpoints however, and any middle ground that exists between them, the current state of religious suppression and intolerance should be considered unacceptable, unethical, and inconsistent with the goals and aspirations of the state.

From the view that Israel is a Jewish state, the rationale is fairly intuitive. The Temple Mount (named so because of the Temple that once stood there) is the holiest site in Judaism, full stop. The Western-Wall is literally a side-note, which only has religious significance due to the existence of the Temple Mount. Arguing about the injustices in how and what kind of worship we allow at the Wall pales in comparison to the injustice that Jews, of any religious denomination or life-style, cannot pray at their holiest site, period. If this is in fact a Jewish state, and if we have maintained practical control over this territory for over 50 years, we have a Jewish religious and moral obligation to ensure that Jews can in fact access their holiest site.

This first way of thinking is easy to understand, but now let’s think about this from the other side of the spectrum. According to this position, Israel is first and foremost a liberal democracy. That means that it has been shaped by western philosophy and thought, in a part of the world where frankly that is not the norm. But we don’t compare our state to the despotic or authoritarian regimes of the region to quantify or qualify our success, we have garnered enough of that through our own merit. We rank higher than the United States on happiness indexes, we are an OECD country, we are a world leader in innovation, not because of the region we live in but in spite of it. This is because the framework brought to humanity through western liberalism is unrivaled in its capacity for progress compared to every other political or philosophical structure ever attempted. Therefore, we should be appalled by the fact that at the core of our island of religious freedom and tolerance lies the status quo of the Temple Mount.

The Wakf (the Jordanian administrative body of the Temple Mount) represents everything synonymous with religious suppression. Non-Muslims are not allowed to open books, close their eyes for too long a period of time, or sing on this site (during the arbitrarily decided non-Muslim visiting hours). This suppression is triggered by one of two causes, the first being a claim of religious-exclusivity that after thousands of years of bloody conflict, reaching its climax during the Thirty-Years War, the West grew out of. In liberal societies we know that my religious truth cannot be definitively proven any more than yours, and moreover we realize that any attempt to do so, especially through illiberal means such as violence or suppression, does great harm to individuals and society. The second cause of this suppression is the potential intolerance or wrath of other worshippers. This again is unacceptable behavior in a liberal society as it completely defeats the idea of individual security and freedom to act, in this case to worship, without fear for life and limb. This is in fact the cornerstone of any society governed by the rule of law. Both of the possible justifications for limiting religious freedoms on the Temple Mount are antithetical to liberal democratic principles and have no place in the state of Israel.

While the argument for equality of access to the Temple Mount from a Jewish or Judaism oriented perspective may fall on deaf ears, the case for religious liberty is one that carries a much larger potential audience. The only thing holding Israel back at this point is the lack of tolerance from the surrounding communities, both our Arab neighbors and our Palestinian brothers. While it may be ideal for tolerance to be taught, in this case it must be demanded as we cannot let Israel sacrifice its identity or ideals nor succumb to the tyranny endemic to the rest of the Middle East. This perverse exercise in distributive justice has led to more discrimination, discord, and now bloodshed and must be changed through decisive ethical leadership.  It’s time that Israel’s liberal-democratic allies, its advocates in the Diaspora, its officials and politicians, and all those who care deeply for this country call the status-quo what it is – a disgrace to religious tolerance and liberty in Israel.

About the Author
Ariel Brodkey, born and raised in the United States, made Aliyah in 2012. He completed his military service in a special operations unit, and now studies government, diplomacy, and strategy at IDC Herzliya. His independent research focuses on international relations, political analysis and philosophy, and strategic policy development.
Related Topics
Related Posts
Comments