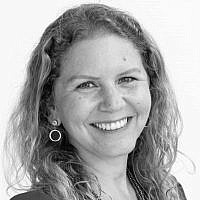 The Blogs
Carol Hauser
Try | Make Mistakes | Learn | Succeed
Apply for a Blog
Please note that the posts on The Blogs are contributed by third parties. The opinions, facts and any media content in them are presented solely by the authors, and neither The Times of Israel nor its partners assume any responsibility for them. Please contact us in case of abuse. In case of abuse,
Report this post. 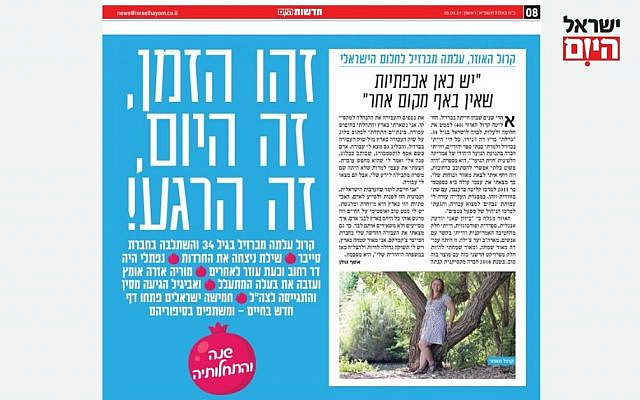 People really care about you. This a very special Israeli trait.

Six years go, I decided to pursue my dream and immigrated to Israel when I was 34 years old. I grew up in Rio de Janeiro, where I attended a Jewish school and was a member of Jewish youth movement Chazit Hanoar.

The decision was taken when I just couldn’t stand the urban violence in Rio anymore. There were a couple of episodes that pushed me out of my comfort zone.

I arrived in Israel on Sept. 8, 2015, with only two suitcases and lived at the absorption center in Raanana. I found my first job through Gvahim, an NGO that provides Olim Chadashim (new immigrants) with the network, the tools, and the knowledge. They help people land their first job in Israel.

Because of my language skills — I am fluent in English, Spanish and Portuguese — I found my first job at Netafim, an Israeli manufacturer of irrigation equipment and a pioneer in drip irrigation technology. There, I used to manage internal organizational projects across the Americas, all the way from the US down to Chile.

I was very happy to work for such an innovative company. But a turnaround happened in 2018: a Mexican company acquired Netafim and my position was transferred to the Latin American country.

After struggling to find a job, I decided to launch my own blog on The Times of Israel (TOI) news portal to share my personal experiences in the Israeli market. As a result, I took my first steps into the digital world to stand out in the crowd.

Assaf Luxembourg, a fellow blogger in the TOI, approached me and asked if he could help me find a job. Immediately, I agreed. Fast forward a couple of months. He once sent out an email to his contacts offering them a job opportunity to work directly with him. It wasn’t exactly what I was looking for, but I decided to give it a shot.

Israel has something very unique and touching: solidarity, this readiness to help the other, this empathy. In general, I always try to keep an optimistic mindset. I am thrilled to see so much solidarity.

Also, this is how I landed my current job at Checkmarx, an Israeli cybersecurity company.

I’m sure I made the right decision. I’m proud to be bold enough to live a successful life in Israel.

About the Author
Carol was born and raised in Brazil. She has a BA in Business and MBA Finance. She had spent her professional career working as a business consultant there. In 2015, she decided to make Aliyah and try a new life in Israel. After two years of experience working for Netafim (an Israeli manufacturer of irrigation equipment, pioneer in drip irrigation technology, considered as 'low-tech'), she still found it difficult to land her second meaningful job in Israel with no technical background. In 2018, she initiated her path into the digital world to stand out in the crowd. She started blogging in the 'The Times of Israel', attended networking events and kept reskilling herself. This is how she landed her current position at Checkmarx - she not only built, but also nurtured relationships. She also was interviewed and featured in Israel's leading women's magazine, La-Isha (The Woman, in Hebrew), as one of five examples of women who had no coding experience nor any background in the high-tech scene in Israel, but they did it anyway. In this blog, she shares her knowledge and practical tools to help all the other job seekers. “What you keep to yourself you lose, what you give away, you keep forever.” - Axel Munthe
Related Topics
Related Posts
Comments