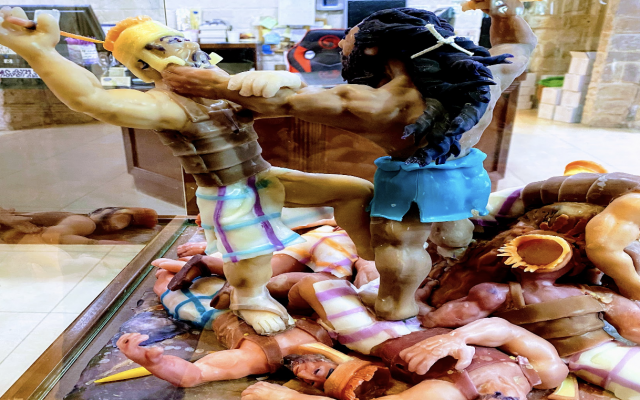 After the 11-day war with Hamas in Gaza that left another twelve Israelis dead and millions scurrying to bomb shelters amidst over 4,000 missiles shot indiscriminately at Israeli civilian population centers, I am left wondering about how are we supposed to treat those Palestinians, who want all of Israel for themselves (“from the river to the sea”) and to genocidally wipe out all the Jews from off the map.

On the one hand, we are instructed, and as Jews are deeply inclined to “Love thy neighbor as thyself” (Leviticus 19:18) and to have compassion and show kindness to the stranger in our midst (perhaps like to the Arab Israelis). This is similar to how we are to show goodwill and mercy to the widow and orphan who are vulnerable (Deuteronomy 10-19):

You shall love the stranger, as you were strangers in the land of Egypt.

These essential Jewish teachings would lead us to rightfully contemplate and pursue the legitimate need to integrate with and make a genuine peace with the Arabs that live in Israel, Judea and Samaria, as well as the surrounding Arab nations. Because, as Jews, we were both slaves in Egypt and exiled from our land for 2,000 years, endlessly subjugated and persecuted, we know what it is like to be mistreated, and so we need to learn from this to be a “holy nation” (Deuteronomy 7:6) as well as a “light unto the nations”(Isaiah 49:6) in terms of how to properly treat others (whether they are righteous converts, resident aliens, or our neighbors).

On the other hand, in the Torah, we also are told to utterly destroy those nations that represent evil or which are an existential threat to us. For example, we are commanded to destroy the Seven Nations of the land of Canaan so that they would not divert us from following Hashem (Deuteronomy 7:1-4):

When the L-rd your G-d will bring you to the land into which you are coming to take possession of it, and he will banish many nation from before you: the Hittites, the Girgashites, the Emorites, the Canaanites, the Perizites, the Hivites, and Yevusites…you will smite them; you shall destroy them; you shall not establish a covenant with them, and you shall not show them favor…because he will divert your son from following Me…

Similarly, G-d also commanded that we destroy Amalek who brutally attacked the weakest of the Israelites in the desert when we left Egyptian slavery and who seek our destruction in every generation.  They are considered the essence of evil and we must fight against them to their finish (Deuteronomy 25:19):

You shall expunge the memory of Amalek from under the Heavens.

So those bent on Israel’s destruction (like a radicalized nuclear Iran or their terrorist proxies Hamas, Hezbollah, Islamic Jihad, etc.), would be in the category of a milchemet mitzvah (or War of Obligation) where we are required to engage in battle and defend our sovereignty and survival. Interestingly enough, the Ammonites and Moabites that were descendants of the son of Lot (Abraham’s nephew) or the Edomites who are descendants of Esau (Jacob’s twin brother) are not slated for dislocation or destruction. We differentiate between those who are our historical brothers and sisters and have the potential to live in peace with us from those that are an absolute and enduring threat to our very existence.

In this last conflict between Israel and Gaza, we not only saw the vicious rocket attacks by Hamas on innocent civilians, but also saw Israeli Arabs rise up inside Israeli cities and revert to terrorism, attacking Jews, destroying property, and even desecrating and burning down synagogues. Some would say this threat from within is perhaps one of the most dangerous threats to Israel, since it creates the possibility for civil war or a fourth dimension of dangerous attack against Israel, this one from within (the others being from land, air, and sea from the outside). Like a cancer inside the body, this can be a significant threat to Israel’s unity, sovereignty, and ability to function.

In this week’s Torah portion, Naso, we learn about the laws of the Nazirite (or someone consecrated to G-d) who doesn’t cut their hair or drink wine. One of the most famous Nazirs was Samson, who represented the duality of this relationship with Israel’s enemy the Philistines. Motivated by his passions, Samson married a Philistine woman from Timnah, and later, also fell in love with another, Delilah, who betrayed him to the Philistines. At the same time, Samson fought heroically to kill the Philistine enemies of Israel and even eventually brought their Temple down on their heads as he was tied to the pillars of it in one last act of heroism and strength from G-d Almighty. Interestingly, Samson both loved and fought the Philistines.

In summary, with regards to Israel, we must follow two important commandments that guide our relationships with the outside world. First, there is the imperative to love our neighbor and the stranger. Second is the dictum to wholly defend ourselves from our enemies who seek our destruction. While on the surface these may pose a contradiction, in reality, they do not, because if our neighbors and the strangers among us are willing to live in genuine peace with us then we gladly and actively will extend the olive branch in peace and brotherhood. But if unfortunately, our neighbors are bent on our genocide then we must fight them. Love and peace is always what we want from the bottom of our hearts, but war is a necessity that is sometimes thrust upon us by our enemies and that we must absolutely, with G-d’s help, win.