The Portion of Masei

The Summation of the Journey of the Children of Israel

The Israelites are at the border. The Land of Israel lies before them. Now is the time to summarize their journey of 40 years. We don’t want it forgotten.

Israel was not wandering for 40 years in the desert. For almost 38 years they were in Kadesh Barnea and for almost 1 year they were at Mount Sinai. They were traveling a little less than two years. That is still a lot of travelling for 600,000 men plus women and children and animal

The 40 years of wandering in the desert were accompanied by miraculous wonders. How was this phenomenal experience to be passed on to future generations? How was the tradition to be preserved?

Just as anyone who embarks on a lengthy journey will relate in great detail the places which he visited and the places where he stayed, so to does our portion. The Torah lists all the places where the Children of Israel encamped, and this for the benefit of future generations and against those who claim that the wandering in the desert continued for 40 years due to false navigation. They simply were lost! (In accordance with the explanation of Maimonides in the Guide to the Perplexed.) Remember the old joke that this was before GPS. Moses puts in his primitive GPS and it says in primitive ways that the journey will take 40 years!

The story of the lengthy journey assumes even greater significance when it is written as it is in certain Torah Scrolls where the points of embarkation and disembarkation are clearly delineated. These Torahs were commonly written in Eastern Europe in the end of the 19th century and the beginning of the 20th century.

Here is an example of such a Torah. 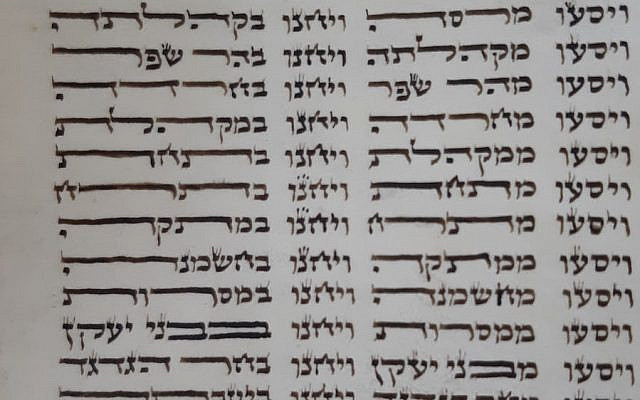 My picture of an old Torah

“What happened to you?” asked a bystander of Herman Himmelman, lying on the sidewalk outside of the beauty parlor.

Herman shook his head groggily and rubbed his bruised chin. “Well, the last thing I remember was my wife Sadie coming out of the beauty salon. I took one look at her and said, ‘Well, honey … at least you tried.'”