Every year, the Swiss Federal government provides about 1 million Swiss francs to a framework based in Ramallah and known as the Human Rights and International Humanitarian Law Secretariat. From there, the money (along with similar amounts from Sweden, Denmark and the Netherlands), is distributed to over 30 non-governmental organizations (NGOs) – some Palestinian, and others Israeli. More than half of these groups are active in BDS and lawfare campaigns (seeking to label Israeli officials as war criminals), and a number of Palestinian recipients have links with alleged members of the PFLP terror group.

Until very recently, this problematic government policy was largely hidden from view in Switzerland, including from the Parliament. No officials from the Swiss Foreign Ministry, including the Swiss Ambassador to Israel, as well as from the Agency for Swiss Development and Cooperation (known as DEZA) discussed the relationship with the NGO Secretariat, and journalists had no information enabling them to examine these issues.

This situation has now changed, and on Wednesday, the Parliament voted (111 to 78 with 4 abstentions) to “amend the laws, ordinances and regulations so that Switzerland can no longer subsidize, even indirectly, development cooperation projects carried out by NGOs involved in racist, antisemitic or hate incitement actions, or in BDS (Boycott, Divestment and Sanctions) campaigns.” This is not the final word – the Swiss Council of States (the upper house that represents the different cantons) will consider this issue in May. 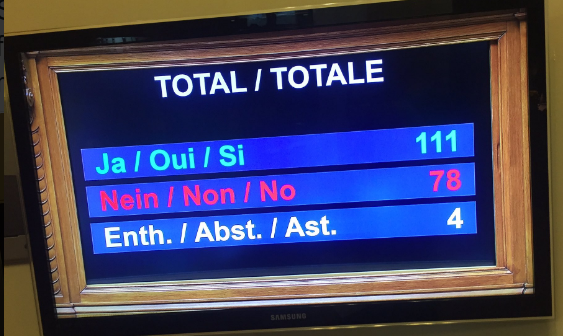 The final result of the vote in the Swiss Parliament

Regardless of future developments, the long period in which a small group of Swiss officials were able to secretly deliver large sums to radical NGOs under the façade of human rights and promoting peace is over. These officials can no longer hide funds going to Al Haq, Al Mezan and the Palestinian Center for Human Rights – three of the leading Palestinian lawfare NGOs, or sweep under the rug their activities and links of Swiss-funded NGOs to the PFLP.

In the past year, following briefings and reports by NGO Monitor, prominent Swiss journalists began to investigate, request documents under freedom of information regulations, and expose the antisemitism as well as the wasteful spending practices of the Secretariat and the lack of transparency. In addition to the radical Palestinian groups, these reports noted that a number of Israeli political NGOs also receive funds, including Breaking the Silence, B’tselem and Adalah.

This new transparency, which was forced on the Swiss government, follows similar parliamentary debates and action in the Netherlands, UK, the European Parliament in Brussels, Spain, and elsewhere. The overall result is to highlight the unique processes for funding NGO-led campaigns against Israel, and the failure of the officials involved to properly investigate the recipients and how the money was actually spent.  As more questions are asked, additional due diligence failures are revealed, and criticism increases. As a result, the government NGO money that propels BDS and other forms of political warfare has started to decline.

By chance, the action of the Swiss Parliament also highlighted the different approaches and tactics that are being used in the BDS wars, and contrasts with the Knesset approval of a law that gives the government additional legal backing for denying entry to foreign BDS activists.

This process was another in a series of Israeli political and legislative responses adopted out of frustration resulting from the malicious BDS and lawfare campaigns. In parallel, the Israeli Interior Ministry denied a work visa to BDS leader Omar Shakir, recently employed by U.S.-based Human Rights Watch. The decision cited HRW’s long and well-established role as “a blatantly hostile anti-Israeli organization.” After denying Shakir’s appeal, the government agreed to provide him with a tourist visa.

The Knesset action and the confusing HRW visa policies, which received widespread and negative international media coverage, while understandable from an internal Israeli perspective, are unlikely to weaken the BDS movement and the political warfare campaigns. In contrast, the actions by European members of parliaments and journalists who have examined the millions of Euros, Pounds, Swiss francs, and Kroner provided, usually through highly secret processes, can be expected to have a more significant impact.

By increasing the interaction between the Knesset members and their European counterparts, and providing the details regarding the damage done by irresponsible NGO funding, Israeli lawmakers can make a greater impact in the long term.