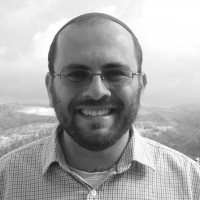 The Blogs
Adam Friedmann
Apply for a Blog
Advertisement
Please note that the posts on The Blogs are contributed by third parties. The opinions, facts and any media content in them are presented solely by the authors, and neither The Times of Israel nor its partners assume any responsibility for them. Please contact us in case of abuse. In case of abuse,
Report this post.

I am ashamed of the fact that the State of Israel cannot clearly and unequivocally condemn Putin’s war on Ukraine. It is a disgrace to hear from a Ukrainian colleague that she draws hope for her country by reading about the history of Israel, and then watch my government fail to provide anything more than “humanitarian goods”. I don’t fault the government for its failures to act and declare. The Prime Minister and Foreign Minister are decent people, and they are struggling to do what is right while balancing the safety of their own citizens (including mine). They may very well be right in their assessments. That is not for me to judge. But that doesn’t lessen my shame in enabling a vicious tyrant in his pursuit of blood.

Among the blessings that God promises the Jewish people when they live righteously in the Land of Israel is that “no sword shall pass through [their] land” (Leviticus 26:6). The Sages of the Talmud (Ta’anit 22a) explain that the “sword” here is not one of war. The Torah promises peace to the Jews elsewhere. Rather, the Torah is referring to a “sword of peace”. The sword of a nation who is at war with someone else and just needs to pass through our land to get to the battleground. What’s so problematic about remaining neutral that we are blessed with not having to do this?

The Midrash (Eichah Rabbah 1:53) offers an interpretation that is all too relevant to our current moment. King Josiah was faced with a request from Necho, the Pharaoh of Egypt, to allow the latter’s army to pass through Israel on the way to battles further north. Egypt was a dominant regional power and its army far outstripped that of King Josiah’s. Jeremiah the prophet advised capitulation to Egypt, but Josiah exclaimed, “the Torah promises ‘no sword shall pass through your land’. Can I then let the sword of this evil man pass through my domain?!”

According to this midrash, having the sword of peace pass through the land means being subjected to the will of a powerful bully and to the disgrace of abetting his heinous acts, even if only passively.

King Josiah made the wrong choice. He stood up to Necho and was killed. The Jewish People lost one of its most righteous rulers, and, ultimately, its sovereignty.

“No sword shall pass through your land” is not a commandment, but a blessing. When we merit it, God saves us from the disgrace of having to appease men like Vladimir Putin by enabling their most horrific acts, in order to protect ourselves. In this war, apparently, we did not merit this blessing.

How can it be that the children of Abraham, who stood as a lone moral voice against a world filled with barbarism, are now forced to become “tightrope walkers” over an issue whose moral clarity is recognized by all freedom-loving nations? What do we do with this shame? The Sages viewed the “sword of peace passing through the land” as cause for declaring a fast day for repentance and introspection. (Ta’anit 19a, Mishneh Torah, Fasts 2) We should consider what failures of our own have led to this terrifying moral vulnerability. Apparently, there’s no use in blaming the weakness of Western powers, or their abandonment of our region to the hegemony of thugs. The answers in this case are found within.

On the high holidays, when we pray for the revelation of God’s dominion on Earth, we mention two types of speech. On the one hand, we ask that God “open the mouths” of those that place their hope in Him. On the other, we ask for the day that “injustice will close its mouth” when “all wickedness will vanish like smoke” and when God will “remove the rule of evil from the earth.”

We could use both of those things now, so that we never again find ourselves silenced and ashamed at a moment like this.

About the Author
Adam Friedmann is a technical writer who grew up in Toronto, moved to a whole bunch of places, and finally landed in Israel. He teaches about Judaism in various venues.
Related Topics
Related Posts
Comments