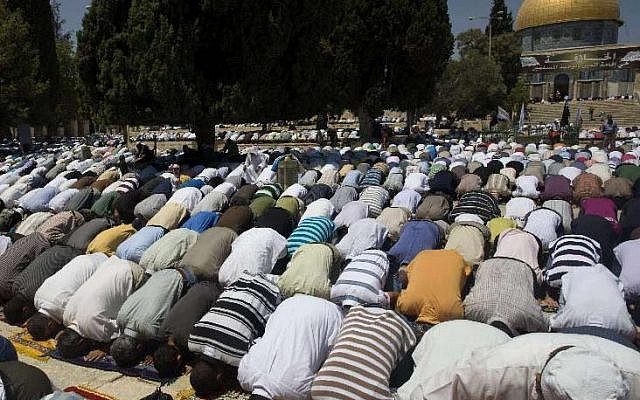 The once rightwing but now just failing Jerusalem Post has just claimed that the Temple Mount is “venerated as holy in Judaism, Christianity, and Islam alike.” It is not.

For Jews, it’s the holiest place on earth. For Islam, it’s the third holiest place. Muslims who pray there face Mecca, with their rear end towards the former Holiest of Holy, now occupied by the Golden-Dome Mosque. And for Christians, who reject this world and only see holiness in disconnecting from the terrestrial, the only holy thing about it is that Jesus was once there – a nostalgic interest. It is shameful and outrageous that a self-described Zionist Israeli newspaper equates these things.

This is not the first time that Israelis cheapen Jews’ connection to the Temple Mount. But previously, that only came from the extreme left.

In this lengthy article is completely missing that a synagogue on the Temple Mount would mean WW III. It’s not negotiable, period. The only winning strategy is to address anti-Semitism in the Muslim tradition.

It even lets an extremist tell it that the Temple Mount is “the holiest place for the Jewish people. Our enemies are taking it over, they are breaking the law, destroying archaeology sites and disgracing Judaism and God. We have to fight.” No objection is printed.

Our enemies have taken it over more than a millennium ago and they are destroying the archeology but they are not breaking the law, not disgracing Judaism and God and there is no need to fight. You can’t just report lies and manipulations of the truth without any refutation.

One of the constants of the ultra-right and racists in general is the talk of all Arabs being this, that and the other. You can’t just publicize that.

You can’t just ignore the differences between Jews, Christians and Muslims but you also can’t treat people differently on the basis of stereotypes about their background or religion. And that is final.