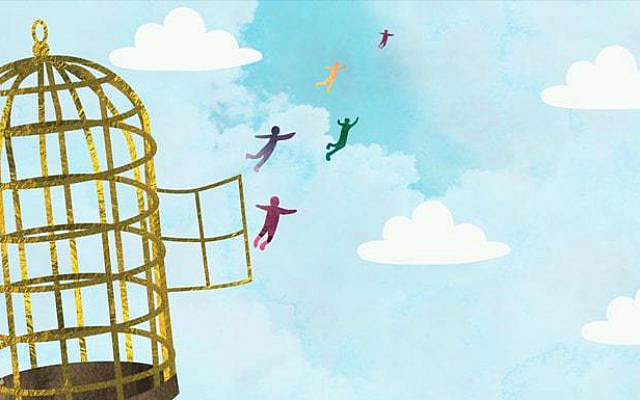 “In every generation and every day, one must consider himself as if he had just been liberated from Egypt.”

Our yearly celebration of Passover is not just a commemoration of an event over 3300 years ago. We are expected to acknowledge every day the limitations that keep us from becoming who we should be and then liberate ourselves from them.

The great Rabbi Yitzchak Luria teaches that segments of time are infused with different energies and characters similar to matter and objects in space. Every Holy day has its unique character.

Passover is “the season of liberation.” If and when we relive the steps taken in the past to reach Exodus, we too can move to greater and bigger things, become transformed and elevated. We, too, can experience personal freedom from what holds us and suppresses us.

It is relatively easy for a person to move from one geographical location to another. God did not want merely to take the Jews out of Egypt; the greater goal was to push Egypt’s impure and debased mentality out of the Jewish people.

This is why they were commanded to “draw and take for yourselves sheep.”

It was not just the act of bringing the sacrifice; it was about boldly drawing themselves away from the atmosphere and practices of their neighbors and connecting with a new approach. In Hebrew, the word used here for “sheep” is the same as “to exit, to go out.” God said you must eschew your present mentality and behaviors and seek a new path if you are to be liberated from your current condition.

King Pharaoh embodied the culture of the Egyptians and the root of their problem. When Moses approached him to free the Israelites on behalf of their God, Pharaoh said, “Who is God that I should listen to and consider his request?”

Pharaoh considered himself a God. He regarded himself as self-made and believed everything was to his credit. He did not need any other spiritual powers because he was self-sustained by the Nile. That is the characteristic of spiritual slavery and confinement. This person is all by himself, walled in by his finitude. For the most part, people take all of life on their shoulders and carry a burden that exceeds what they can handle. They blame themselves for circumstances that are way beyond their control. They expect of themselves, and for themselves, far too much.

We liberate ourselves from this thinking every year on Passover.

Moses responded to King Pharaoh that although if God wanted to, he could take the Israelites out of Egypt in one moment, there would be a process of ten plagues that would engender a complete transformation of everyone in Egypt.

The last set of four plagues will accomplish the realization that there is no other force anywhere as the source for anything but this omniscient one, God.

Moses had a speech impediment (as the Bible says in Exodus 4:10 “…for I am heavy of mouth and heavy of tongue…”), and yet, when it came to announce that the time of liberation had arrived, he was miraculously able to speak perfectly. When the Egyptians saw that all the firstborn were killed, even those who hid and even those who were only discovered to be firstborn afterward, they were gripped by a new respect for the real God.

The path to true strength in life is the internalization of faith that we are never alone. There is a wise God who put us in the world, knowing we can succeed and always prepared to help us, even miraculously, if and when we make Him a part of our lives.