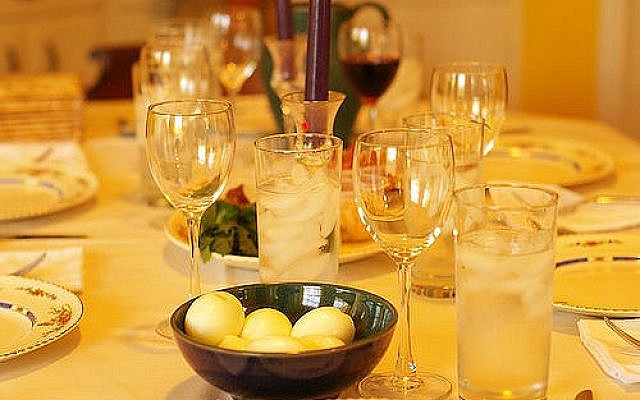 A seder table. (Courtesy, via the Jewish Week) 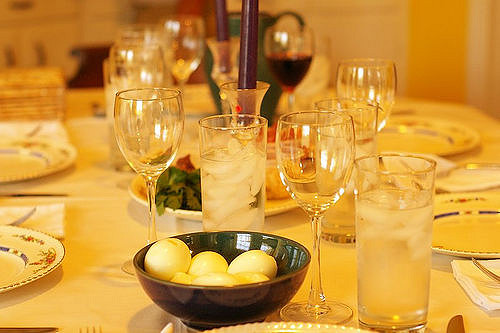 Multiple verses in the Hebrew Bible advise us to luxuriate in the Passover story. We are to tell it to our children, if they ask and even if they don’t ask. The Hebrew root for “Haggadah” suggests the kind of speech that lends itself to storytelling. It’s not telling as much as playful elaborating, going off on tangents, adding and augmenting. There’s sweetness in the telling. It’s not linear. The night is long. The meal is late. We move from sorrow to joy, slavery to redemption. It takes time.

Yet in today’s social-media universe, speed is of the essence. Today, you can buy a 60-minute Haggadah, and if you can’t afford it, there’s a 30-minute one. But why spend a whole half hour in this age of sound bites? You’re holding out for the 10-minute Haggadah, you say? We can even beat that. Today we are going to tweet out the entire Haggadah and, true to Twitter, we don’t care about punctuation. We’re tweeting it out “be-chatzi ha-layla,” in the middle of the night.

@breakAleg: “Did you ever see such a gezunte shankbone? I paid XTRA. Worth it”

@Yenta’sYahatz: “Break the matzah already. My head is splitting.”

@MaNishta-nu?: “I hate reclining when I eat. It gives me INDIGESTION.”

@FOURkids: “You pick him every year. He’s not so smart. #tiredofbeingthesimpleson”

@MeshugenaMaggid: “Who are YOU to tell me my father’s a wandering Aramean? Your father is a wandering and crooked Aramean. So is your mother.”

@imanangel: “Anyone know what a SERAPH is?”

@afiko-man/woman: “Whoever said matzah makes a good dessert has never had pecan pie.”

@Sleeplessincairo: “Is there more after the meal? We don’t say that at my Seder.”

@JLennon: “Pour out your hate? All we need is love.”

@Movingtheembassy: “Why wait ‘til next year in Jerusalem?”

@littleoldladyinashoe: “Get off my goat.”

No, it doesn’t take long to get in the spirit, does it? But, as you can see from reading these texts, not one of these tweets tells the actual story. They tell us the reactions of people to various aspects of Passover, the meal and the Haggadah. A quip here. A throw-away line there. A long sigh. A difference of opinion. It’s all commentary. Commentary is important because it engages us, but it’s fragmentary in nature. It interrupts a story instead of telling it. Interruptions aren’t designed to hold complex thoughts for the same reason that six-word memoirs are fun, but they don’t tell us much about a person.

There are great online Haggadot, videos of songs and Passover shtick. The internet presents Passover as a multimedia production of sound and lights. But no online synopsis gives us the wine stain of an old Haggadah that’s been used dozens of times. That Haggadah may have been used every year by someone who may no longer be with us whose memory lingers on the pages. The seder is a night of memory, and recalling memories can be a treasured and laborious process.

Plague bags, sunglasses, Styrofoam balls of hail and Elijah costumes have become terrific props to help us tell the story. Yet if we spend more time buying them than opening up the Haggadah before Passover, we risk a boring seder. We make the seder exciting and meaningful not by what we buy, not by what we eat, but by what we know.

The rabbis of old told their story in bits and pieces. In the Haggadah, they take a long time telling us how, when and where their storytelling took place. The story, however, was the same. It’s rolled out in the Book of Exodus in 15 chapters. We also read Song of Songs on Passover; some read it immediately after the seder is finished. Love takes time. As a courtship unravels, details matter. Romance, like redemption, can be fast and slow. Usually it’s slow and then it speeds up. You can’t tweet it out or, for that matter, tell it all in a Haggadah whose central promise is convenience.

The Haggadah invites the art of conversation. Most great art is not made in an instant. So let’s take time this Passover. Turn 10 seconds into 30 minutes into 60 minutes into a night when we lose track of time because we’ve engaged everyone at the table. We only get the chance once or twice a year. We can make this night truly different from all other nights. Let’s take the time to tell a better story.