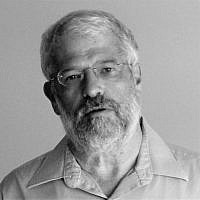 The Blogs
Moshe Simkovich
Apply for a Blog
Please note that the posts on The Blogs are contributed by third parties. The opinions, facts and any media content in them are presented solely by the authors, and neither The Times of Israel nor its partners assume any responsibility for them. Please contact us in case of abuse. In case of abuse,
Report this post. 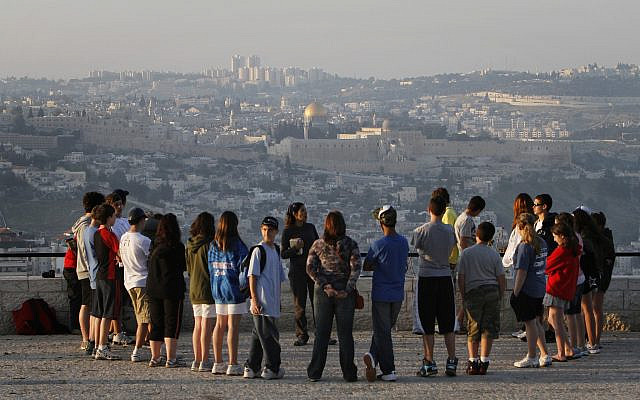 Illustrative. A tour group listens to a guide at the Armon HaNatziv Promenade in Jerusalem against the backdrop of the Old City, April 14, 2010. (Miriam Alster/Flash90)

At about 10:00 a.m. on Friday, January 10, during my visit to a rainy south Jerusalem, I walked to the promenade area that gives a marvelous view of the dramatic parts of the city. It is situated above a green park on a steep hillside. Thirty years ago, it was an empty slope, but now it is the spot from which tour groups safely view a wide Jerusalem panorama.

As I stood looking at the view, a Birthright group was milling about nearby. A college student from the group approached me, and asked if I spoke English. After I said I did, she asked whether I lived in Jerusalem. I told her that presently I live in Chicago, but have lived in Jerusalem for six of the past 10 years. I asked her where she came from. Denver area, Regis College.

“So,” she asked, “what do you think when you look out at this view?”

I thought for a moment and said:

“Do you see this green area beneath us? It’s beautiful, but it masks the division between Israeli and Arab Jerusalem. It once looked barren, but is now pretty. My hope is that someday the deep division will disappear, and the parklike beauty will reflect a reality of a new peaceful relationship.”

Then a second question:

I thought a little bit. In a nutshell? Should I?

But I had made a podcast two days before, with JewishCoffeeHouse.com that had approached the issue at length. Maybe I could say something cogent… maybe.

“First, history. Considering the previous few millennia, seeing progressions in history, both for good and bad, I think Judaism makes sense of it all to a greater extent than any other approach I’ve seen. If you assume no God, of course that’s going to change how you view it. But the interpretation won’t make sense, and will depress you. I was raised with choice on this, but it’s worth considering that the Jewish people’s continuity and significance leads you to consider why — and you can’t consider that why without considering God and history.

Second, experience. There were a few times when I sensed that I was in connection with some Divine Presence. I entered a living ‘flow state.’ This would generally occur during prayer, though not always.”

It occurred to me that the young lady was from beautiful Colorado. And likely didn’t pray.

“Consider this — what if your first drive in your car is on the road high in Estes National Park, the part without guard rails? Naturally you’d be nervous, eyes on the road, not gazing down the steep cliffs along it. You’d be out of touch with something gorgeous. But if you drove mountain roads frequently, there’d be less anxiety. You’d be able to take in the gorgeous landscape.

I pray daily. Once in a while, a few times a year, you can glance between and beyond the words to an experience that sweeps you away with an intimacy that reverberates deeply, where there is a trace of God. That day, time stands still while you stand in prayer. But only because daily I try to give it a chance, I…”

At that point, the guard/guide for Birthright appeared. She aggressively demanded:

“You must go back to your group activity now, immediately. You must stop talking to anybody. And you sir, go away. Now.”

“May I finish a sentence, or say goodbye?”

I said haval, too bad, and let it be.

It was a great conversation, and fits in with what I believe Birthright is about — giving meaning to one’s Jewish identity, finding yourself in positive relationship to Israel. Until we were interrupted.

Flummoxed, I considered this interchange in context. Here is Birthright, bent on conveying a life-changing experience of Israel. It must totally control its message, and must provide security as well. I get that. And Birthright is so necessary.

Here was a situation, a conversation, with wonderful potential. But must it be undermined by a rude, officious, immature Israeli? She appeared to be a soldier. Was she trained in relating to others as potential allies? Was the only option given, to treat gray-haired people as threats?

I bet she’s happy in her role. A Birthright guard job is rumored to be a plum army posting. But from the college student’s point of view — isn’t treating people in an ugly manner going to cast a negative light on being in Israel? Do you just bully people in Israel? Maybe they treat Palestinians like that? Or worse?

Birthright has to ensure that it does not undermine its mission by having rude guards and guides treat people offhandedly as enemies. Instead of automatic abrupt lecturing, discernment and explanation is needed. Not just orders. At the airport, security usually tries to help visitors feel a little love and concern, not anxiety. Why not here too?

I hope the young lady from Denver didn’t feel this, forgot about this, and just walked on. But maybe she didn’t. Surely you can’t count on it.

And what about her questions? Brithright has to allow for some venue where natural, not pre-programmed conversation can take place. Otherwise, you hamstring the objectives of the program.

The young lady went back to the “activity” — standing in a circle in that beautiful place, to feel part of a people circle. An American-born individual figuring things out, shoved into a traditional Israeli style circle-group. But — a circle that contained some empty space at its center. Does Birthright have a program with a magic that group programming can’t provide? Yet lasting Jewish commitment to community requires a human touch that can sense the deeper touch that makes the Jerusalem panorama sparkle, even on a cloudy day.

About the Author
Rabbi Moshe (Marvin) Simkovich is a professional development coordinator and consultant for the Associated Talmud Torahs, ICJA, and teaches at the Melton Institute in the Chicago area. He was the founding Head of School and Dean of Judaic Studies at Stern Hebrew High School in Philadelphia (now Kohelet YHS), and taught for many years at Maimonides School in Boston. He also served as the rabbi of Congregation Shaarei Tefilla in Newton, MA, and was the Orthodox advisor at Brandeis University. A graduate of the University of Chicago, he received his semicha under the direction of Rabbi Moshe Meiselman, and, among others, studied under Rabbi Yisrael Gustman zt"l.
Related Topics
Related Posts
Comments