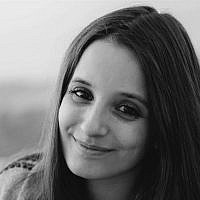 The Blogs
Risi Adler Finkel
Apply for a Blog
Advertisement
Please note that the posts on The Blogs are contributed by third parties. The opinions, facts and any media content in them are presented solely by the authors, and neither The Times of Israel nor its partners assume any responsibility for them. Please contact us in case of abuse. In case of abuse,
Report this post.

I wonder if I will always cry when I see Jewish women dancing with a Torah.

On the holiday of Simchat Torah at the end of Sukkot, the prayer services transition into “Hakafot,” when traditionally the men take all the Torah scrolls out of the ark and dance with them for hours. The first time I saw a woman dancing with a Torah was in 2009. My cousin in Gush Etzion brought me to a women’s Hakafot in the local clubhouse, and I apprehensively joined. I had never identified as a Jewish feminist and didn’t have the desire to dance with a Torah. I wasn’t against it or anything, it was just something I had never given a second thought. But when I saw these women singing from their hearts, lovingly cradling the Torah like a child, I felt moved to tears and knew that this was an experience that every Jewish person deserves to have.

In the Orthodox community, from the time we learn to speak, we are taught verses and songs from the Torah. I remember my own son singing “Little Torah, little Torah, let me hold you tight.” Every Shabbat, we remind ourselves that the Torah is a “Tree of Life to all those who cling to it.” This proverb of King Solomon is an instruction manual: cling to the Torah, hold it close, and it will be a source of life. In order to create the love we are encouraging, we must make the Torah accessible to all; emotionally accessible, spiritually accessible, intellectually accessible, and yes, physically accessible.

This year on Simchat Torah, I brought my two-year-old daughter to the women’s Hakafot in my town. It’s one of my favorite events of the year, with words of Torah shared between each Hakafah, singing, dancing, and a sense of Jewish sisterhood. In the past, the event was held in the synagogue’s Beit Midrash (study hall), and we were given a Torah to dance with. Thankfully the group has grown so big that this year we needed additional space and the event was held in the parking lot outside – but for whatever reason, this meant no Torah. The words of Torah were insightful, the songs were joyous and heartfelt, the dancing was spirited and exciting, but I felt like I was at a party whose guest of honor never arrived. After a few minutes, I brought my daughter to my husband who was dancing in the street with the other men. As I watched them hoisting three Torah scrolls up in the air, the Torah felt beyond my reach, physically and emotionally.

The next day, I watched as all the children in the community gathered under a giant tallit (prayer shawl) for another Simchat Torah tradition. The kids make a blessing on the Torah, and everyone watching blesses the children (another part of the holiday I will never make it through without crying). As I looked at my son and my daughter, I wondered about her future in the Orthodox Jewish community. The years will go by in the blink of an eye, and soon she will be too big for this tradition. How will she continue to feel involved in communal Judaism? At six years old, her big brother already feels a connection to synagogue – he’s been singing in front of the congregation since he was four in COVID-era backyard services. Soon enough, he will be counted in a minyan (quorum of 10 men) and will read from the Torah. But what role will my daughter be able to fill? Where will her place be?

I remember arriving early to prayers one Friday afternoon when I was in college. There weren’t enough men to begin the service, and my friend turned to me and said, “If they counted us, that would make ten. I hate that our presence here doesn’t matter.” These words that she probably doesn’t even remember have stuck with me for a decade and changed the way I view the role of women in Orthodox Judaism.

Sarah Schenirer founded the Beis Yaakov movement over a hundred years ago in order to provide Jewish Orthodox women a Torah education that was previously not offered to them. As a result of the Enlightenment, Jewish women were allowed to attend universities and were leaving Orthodoxy in droves. Beis Yaakov provided an intellectual outlet to these women, which kept them in the community. A century later, the world we live in is continuing to change. As women – both married and single, with or without children – attain the highest academic degrees, step into C-level roles in global companies, and rise in the ranks of armies, they remain adrift within Orthodox institutions. What will keep them coming to synagogue? What will make them bring their children? If access to a Torah is out of their reach, but a seat in the boardroom isn’t, what do you think she will choose?

I don’t know what the right solution for each community is, but I believe that any role that a woman can fulfill according to Halacha (Jewish law) should be open to them and encouraged. Space in synagogues for women’s Megillah readings on Purim, giving over Torah classes to the whole congregation, and of course dancing with a Torah scroll on Simchat Torah. We need to celebrate women in communal Judaism. This shouldn’t be done under wraps outside the walls of the synagogue in the local clubhouse. It should be in front of the community, for our daughters and sons to see and emulate.

Listen, my child, to the instruction of your father, and do not forsake the Torah of your mother (Proverbs 1:8)

About the Author
Risi lives in Hashmonaim with her husband and two children. She is a Creative & UX Writer at Waze.
Related Topics
Related Posts