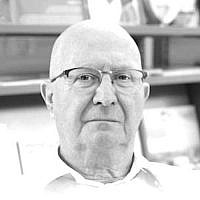 The Blogs
Henry Tobias
Apply for a Blog
Advertisement
Please note that the posts on The Blogs are contributed by third parties. The opinions, facts and any media content in them are presented solely by the authors, and neither The Times of Israel nor its partners assume any responsibility for them. Please contact us in case of abuse. In case of abuse,
Report this post. File: A view of the walls of the Old City and the Mamilla shopping mall (photo credit: Yossi Zamir/Flash 90)

I have lived in Israel since July 1979 — 36 years. In that time I have seen everything improve, except it seems the plight of the consumer, especially when dealing with chain stores. Their approach to customer service is to say the least, indifferent.

I live in Maale Adumim, where we have a shopping mall with a good variety of shops, mostly women’s fashion, but still, I usually I find what need locally.

A few weeks ago I wanted to buy a cheap pizza wheel. I like to cook and pizza is both tasty and using the right ingredients fairly nutritious — if, of course, one does not eat too much pizza. I looked around and found a pizza wheel for NIS 15 at NAAMAN — the retail household goods chain. It was just after 9.00 a.m. and I only had a NIS 200 note in my wallet. The manager of the store refused to sell me the item I wanted, because she would use up all her change — this despite the fact that there are THREE banks in the mall and another nearby. I phoned the company’s head office. The lady who answered the phone was completely uninterested and dismissive of my complaint!

Recently I needed to buy a paper shredder. We are tidying up our house prior to renovations and want to properly destroy paperwork accumulated over many years. We tried tearing it up by hand, but it is too slow a process.

I phoned ACE Hardware store in the abovementioned mall and asked whether they sell shredders. They replied that they do. I then asked the lady if she could give me the price range. “Sorry, we’re not allowed to give prices over the phone.”

I wanted to complain to ACE customer services department about this ‘no prices over the phone’ policy. The computer activated voice said that if I didn’t want to wait for an answer, I could leave my mobile phone number in the system and someone human would get back to me. I’m still waiting for them to get back to me!

I then phoned KRAVITZ — the office supply store, asking the same question. “Yes we do sell shredders” and the lady even told me the different prices!

I went to the store the next day and purchased a shredder for NIS 730. I took one with a more powerful motor, because past experience has taught me that a weak motor will burn out quickly.

I took the shredder home and that night assembled it and tried to switch it on. Nothing! Nada! Gor Nisht! Even the green power button light didn’t show. Now I’m no technical wiz, but I do know how to push a button. Nevertheless I called my wife and we fiddled for a few minutes before deciding the machine was as dead as the proverbial dodo! Obviously I didn’t do anything to nullify the warranty. This was a Thursday night. Friday morning I returned the machine to the store. It appears one can spend money in a store on a Friday, but one cannot get service in said store on a Friday.

I left my name and phone number at the store asking that I should be contacted on Sunday morning without having to run after the company i.e., to get the service to which I as a consumer feel entitled. Lo and behold, nothing! Eventually I phoned the store and spoke to the manager. She had not even looked at the machine. “I’ll have to check it myself”, She said. I received no communication from the manager — nothing — not a word. I tried to get some satisfaction from KRAVITZ’S customer services department, where a lady said her manager would phone me back. Nothing! No reply!

The next morning, Monday, I went into the mall on another errand and called in at KRAVITZ to ask what progress had been made.

“Well can’t you ask someone?”

“Why don’t you ask logistics” I suggested.

That she didn’t know who to ask was something of a surprise. That the company doesn’t train their managers in all aspects of the business was a shock. Fortunately, she did as I suggested and she received a reply that the new shredder would be delivered to the store the next day, Tuesday.

On Tuesday I phoned KRAVITZ in the mall and asked what time the shredder would be delivered. The lady didn’t know and could not ask the manager as she was outside overseeing a temporary counter for a promotion. I asked that the manager phone me from her mobile phone, which she had used the day before to contact the company’s logistic department. Again nothing!

I picked up the phone once again to customer services, although I had previously not had any success with them either. The lady who answered said that the shredder couldn’t be delivered that day, Tuesday, because of the heat wave or something — I would receive it on Wednesday.

“But your truck drivers have air conditioned cabs”, I retorted.

“Well these things happen”. Was her unconvincing answer.

But I did hear her talking to logistics in the background. She was the first person of the several that I had spoken to in the company who actually took some initiative.

I resigned myself to waiting another day. What option did I have? I’m too old to run around exploring my options.

Miracle! A few hours later the manager of the store in the mall phoned to tell me that my shredder had been delivered. I collected it later that day and am now a happy shredder!

About the Author
The author is a husband, father and grandfather, writer and editor. He trained as a pharmacist. He has just published his first eclectic anthology of short stories, 'Just for Fun' available on Smashwords, B&N and Amazon and other e-book retailers. Soon in print at CreateSpace. His next book, an historical novel of the Holocaust will be published in 2016. Born in London, raised in South Africa, he has lived in Israel since 1979.
Related Topics
Related Posts
Comments