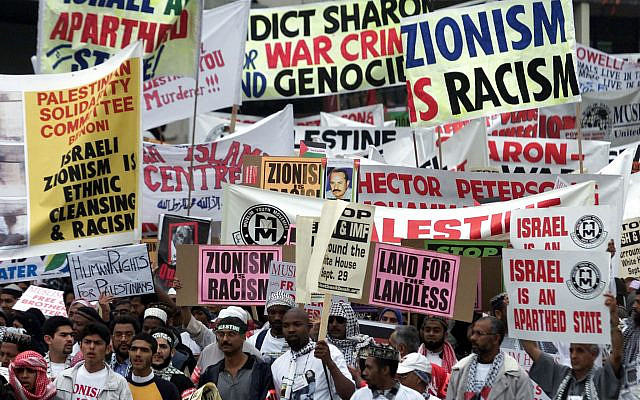 Durban is a global port city in South Africa, a city steeped in influences from many countries and immersed in a mixture of different cultures. It is a city of contrasts: modern skyscrapers alongside urban areas surrounded by markets, a promenade adorned with palm trees alongside dark roads.

Despite all the abundance and multicultural atmosphere this city has to offer, the name “Durban” carries with it a bitter connotation for Jews. Particularly, the words “Durban Conference.” Twenty years ago, in September 2001, the first Durban Conference, which was supposed to be an event to combat racism, discrimination and xenophobia, rapidly became a potent fertilizer in the ground of hatred against Jews and Israel in particular.

It is clear that the seeds of antisemitism did not start then, but the forum certainly accelerated and expanded the venomous accusations against Israel as an “apartheid state,” it propelled the deligimitazation of the state of Israel and its subsequent boycott through global movements such as the BDS (Boycott, Divest and Sanctions.)

This is where the new antisemitism began and the hostile treatment of Jews and Israel erupted in full force, again. Zionism also became synonymous with racism, and the Holocaust was portrayed not as an atrocity aimed at destroying European Jewry, but the justification for “Israel’s wrongdoings.”

On September 22, 2021, an event marking the twentieth anniversary of the Durban Conference will be held in New York as part of the annual UN General Assembly, but unfortunately, nothing has changed for the better in the last twenty years. They are the same wolves in sheep’s clothing.

This year, too, when at least 16 countries show support for Israel and are boycotting the event because of its antisemitic stench even more so than in previous conferences—it is not a real sign of progress. I do not believe for a moment that these countries tend to favor the State of Israel or are sympathetic to Jews wherever they are.

You can buy some fake smiles with money, but the world will not turn over and change as a result of it. It is impossible to solve the phenomenon of age-old antisemitism at conferences. It is possible to gather from conference to conference, but other than money and publicity to promote political agendas or to mark that we have done something about it, no real benefit will come out from such events.

The only condition for change is the self-awareness of the people of Israel and a new attitude about our destiny. The Jewish people were founded from a collection of representatives from different peoples, a composition of different elements, equally committed to unity and love of others.

Antisemitism is resentment of us by the nations of the world. They feel Jews hold the secret for a better future but that we are not opening the pipe for that goodness to flow to all the peoples. Subconsciously, the world expects us Jews to connect with each other, to be united and reach a strong feeling of love for others. If we act in this way, we will be a light unto the nations, we will spread light and not darkness, love instead of hatred. Only in this way will we eradicate the hostilities against us.

Our mission is to bring the method of connection to foster unity and mutual consideration. If we dedicate ourselves to this task and connect together over the differences between us, over the elements that separate us, over the ethnicity and partisanship that tear us apart from within, then we will be an exemplary nation for all peoples.

Even the first tiny step towards unity between us will awaken a stronger connecting force, a supreme force that is essential for all of us. Then, the direction will change from bad to good. As it is written, “We are commanded at each generation to strengthen the unity among us so our enemies do not rule over us.” Rabbi Eliyahu Ki Tov, The Book of Consciousness.