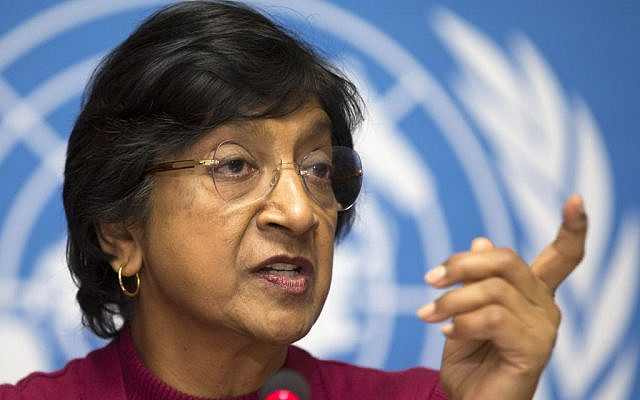 There was nothing surprising in the recently released report by the UN Commission of Inquiry (COI) about Israel’s role in the Palestinian Territories. The past history of bias toward Israel of the UN Human Rights Council and the makeup of the three-person commission assured that this report would be outrageously one-sided. And it lived up to expectations.

None of which is to suggest that there are not legitimate issues of ongoing concern in the territories, whether speaking to settlement issues, discrimination of Palestinians, settler violence or certain Israeli circles calling for annexation of parts of the West Bank.

What remains so stark, however, about this report is the near complete absence of any context for this difficult situation or any role or responsibility for it by the policies, attitudes and behavior of the Palestinians. The few references to anything of the sort appear in several spots where the COI cites Palestinian violence and Israeli security concerns as factors in the reality they are describing. These references are merely paying lips service to these issues. The report then goes on even further to dismiss the relevance of Palestinian violence and Israeli security concerns by describing them as mere excuses for Israel doing what it always allegedly wanted to do— install a permanent occupation and engage in annexation of territory, de facto if not de jure.

What is missing from this report as context for this difficult environment is startling. Not a word about Palestinian rejectionism for decades. Not a word on Israeli steps that completely contradict the narrative that Israel is all about permanent occupation and annexation.

Most significantly, related to the two major themes of the report — that Israel is engaged in moving toward permanent control of the West Bank and its Palestinian population and toward de facto annexation — is the complete failure to mention numerous Israeli peace offers that would have transformed Palestinians lives, including through the creation of a Palestinian state. Israel’s offer at Camp David, then later at Taba, in 2000, would have meant the withdrawal of Israeli from most of the territory and the removal of most settlements. The Palestinians said no and turned to violence and suicide bombs.

Then came Prime Minister Ariel Sharon’s unilateral withdrawal from Gaza, including from all settlements, only to have Israel met with a Hamas takeover, and years of attacks from Gaza on Israeli civilians. And then at Annapolis in 2008, Israel offered the Palestinians one more opportunity to end the conflict and move toward a state as Israel withdraws, only to be met again with no response.

In sum, there are real issues to discuss. But it’s impossible to do that in a serious and responsible way when the approach is the kind of biased one that the COI report represents. The consequence of such one-sidedness is to make the Palestinians think once again that history is on their side in their decades-old rejection of Israel’s legitimacy. This delusion has been harmful to Palestinians and is repeated here once again.

At the same time, a report like this plays into the hands of those Israelis who see the world as against them and prefer the status quo rather than creative solutions and initiatives.

The bottom line: Israel will surely reject this report for what it is: a continuing of counterproductive, anti-Israel propaganda by an arm of the UN that has a long history of bias against the Jewish state.

At the same time, the reality of the situation in the territories, even though it does not reflect either Israeli permanence or annexation, demands Israeli initiatives on the ground to improve living conditions for the Palestinians and to open up new possibilities for negotiations and solutions – even if the Palestinians have not shown they are ready for either.