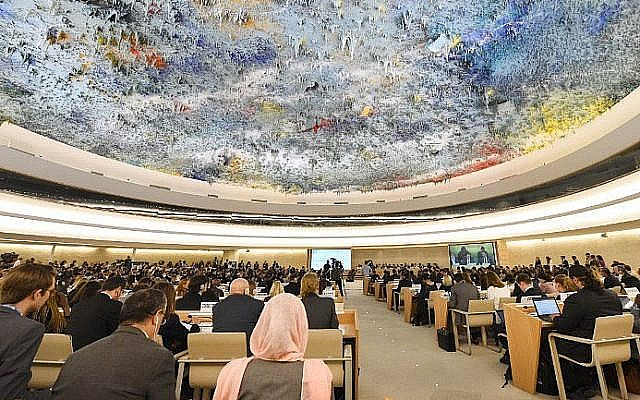 A picture taken on June 18, 2018, in Geneva, Switzerland, shows a general view during the opening of the 38th session of the United Nations Human Rights Council. (AFP/Alain Grosclaude)

The UN Human Rights Council is the most biased body against Israel within the United Nations, and is the most inappropriately named institution within the UN family of institutions. To have a group that includes the most vicious violators of human rights like Syria, Iran and China, intrinsically involved in its work makes a mockery of the purpose of the body.

The UNHRC is notorious for passing a preponderance of its resolutions regarding the state of Israel. No one is suggesting that Israel is beyond criticism, but in a world where massive human rights challenges exist around the globe, the focus on Israel is mind blowing.

The numbers are staggering. According to UN Watch, during the first ten years of the UN Human Rights Council, the body passed 135 resolutions, and incredibly, 68 of them had to do with Israel. And in the years since, the obsession with Israel continues unabated.

Today, we find the Council reaching its lowest point ever in its obsession to demonize and penalize the state of Israel. Now it is not only about an imbalance of attention to alleged Israeli sins, but there exists a highly-biased ongoing Commission of Inquiry into Israel’s behavior in the West Bank and Gaza and toward the Palestinians in general.

It is no accident that this new low for the Council is happening now at the very time that on many levels the Arab world itself is normalizing relations with the Jewish state. How to justify an anti-Israel posture when the parties once most hostile toward Israel are moving toward peaceful relations? Portray Israel in even more evil terms to rationalize continued hostility.

And nothing highlights the abomination of this inquiry more than an interview held this week with one of the three members of the Commission of Inquiry, Miloon Kothari. In this interview, Kothari makes not the slightest attempt to present himself as objective on an investigation of Israeli behavior. He accuses Israel inside and outside the Green Line of Apartheid and goes even further: “Apartheid is a useful paradigm/framework to understand the situation but not sufficient. We need to figure in settler-colonialism, general issues of discrimination, occupation and other dynamics to get a fuller picture of the root causes of the current crisis… ending Apartheid will not end the crisis of occupation for the Palestinian peoples… the issue of self-determination requires many other changes.” All a euphemism for saying that the Jewish state should not exist.

Along these lines, he says that he “would go as far as to raise the question of why (Israel is) even a member of the United Nations. Because the Israeli government does not respect its own obligations as a UN member state. They, in fact, consistently, either directly or through the United States, try to undermine UN mechanisms.”

What stands out amidst this vitriol against Israel is that one doesn’t hear a word about Palestinian terrorism or denial of Israel’s right to exist for decades or Hamas launching thousands at missiles targeting Israeli civilians.

And Kothari even ventures into the realm of antisemitic tropes and conspiracy theories:

“We are very disheartened by the social media that is controlled largely by— whether it is the Jewish lobby or specific NGOs—a lot of money is being thrown into trying to discredit us.”

In the final analysis, the Human Rights Council’s Commission of Inquiry has become a vehicle for the hatred of Jews.

It is important that many ambassadors to the UNHRC, from Canada, the US, the UK and beyond called out this expression of base antisemitism and what it, and the other statements about Israel, says about the integrity of the Commission of Inquiry.

At a time when Iran is not only moving forward on building a nuclear capability and threatening Israel from Lebanon through Hezbollah, and hundreds of thousands of missiles are pointed at Israeli cities, this kind of vicious anti-Israel activity on the international plane gives license to the worst kind of anti-Jewish behavior.

It is reassuring that last month 22 member nations of the Council, mostly from Europe and Latin America, denounced the Commission of Inquiry for its one-sidedness mandate, and it open ended tenure and called on the Council to suspend its operation. What is needed now are for more governments around the world to do likewise to make clear that this investigation has no legitimacy, and its anti-Israel, anti-Jewish message has no place at the UN or anywhere else in the world.