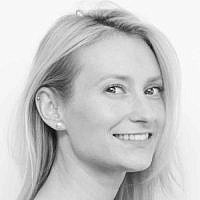 The Blogs
Monika Rozalska-Lilo
Apply for a Blog
Advertisement
Please note that the posts on The Blogs are contributed by third parties. The opinions, facts and any media content in them are presented solely by the authors, and neither The Times of Israel nor its partners assume any responsibility for them. Please contact us in case of abuse. In case of abuse,
Report this post. 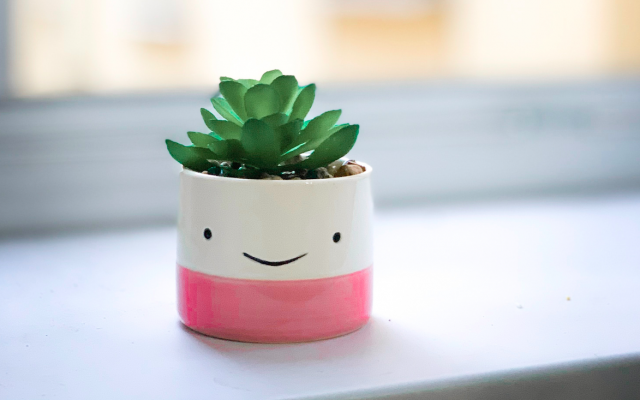 In one of my previous blogposts, I have shared my thoughts on the Corporate Venture Capital (CVC) model. In this one, I would like to continue the ideas around investing in Israel both as a VC (venture capital) and a CVC and the unique characteristics of the Israeli investment scene. Israeli Venture Capital landscape has been evolving and growing for the last 30 years – I will try to give a bird’s eye view on its characteristics as well as the latest developments.

There is definitely a strong interest in learning about Israel as a VC-dense ecosystem not only because of its overall availability of the capital (according to the Israeli Ministry of Economy, Israel is ranked no 1 in availability of scientists and engineers, number of start-ups per capita, and venture capital investments per capita – with over 414$ raised in 2019, followed by 282.1$ raised by the U.S.), but also because of its seemingly distinct characteristics, e.g. that Israeli VCs seem to be more collaborative and open than their international counterparts.

How Did it All Start?

Historically, it was the Israeli public sector that created a mechanism for attracting foreign capital back in the 90’s. The program called “Yozma” was one of the first initiatives to help foreign investors establish their presence in Israel and receive the matching of 50% for each spent dollar. It made a huge impact on the Israeli ecosystem, since the foreign investors were also very interested in helping their portfolio companies scale abroad. Many of these investors were American and, subsequently, supported their portfolio companies in entering the US market (for comparison, these days the U.S. is still the most dominant foreign investor with 35% of capital raised by the Israeli companies, followed by China, UK, Japan and Germany holding around 3% each, according to IVC Research Center).

This way of bringing additional capital to boost the innovative economy came at a time where not too many domestic VC funds or startups yet existed. Back in those years (pre-Internet, pre-SaaS and pre-cloud), building a company was much more expensive, thus the early-stage capital needed to start up a venture was indispensable.

Another public-led initiative that supported innovative company creation was led by the Chief Scientist (today Israel Innovation Authority) and was called the Technological Incubators Program. Interestingly, the program was, among other things, targeting Soviet-born population that emigrated to Israel in the early 90’s – a group of highly skilled scientists and engineers who were not always able to find a fitting position in a small Israeli economy. The Incubators program was introduced as a viable alternative carrier path to a potentially demoting job inside the regular job marketplace. The early iteration of the program was not a hit: Public servants turned out not to be equipped with the right skills to run technological startup programs. This is why the change in the program was introduced. Instead of employing people inside the public sector to run the incubator, the government opened the procurement process to private organizations who are experts in early stage companies, giving them capital to take over this task for the benefit of all the parties involved – including the state that has since received royalties from successful technologies, but does not interfere in their early-stage development on a daily basis.

The Incubators program helped to market startup building as a viable carrier option for highly skilled technologists and allowed them to get early-stage capital specifically for capital-intensive and high-risk solutions that would have difficulty receiving early-stage funds from the private market. These industries included e.g. healthcare, agriculture, hardware technologies (e.g. semiconductors) and more. The Incubator program operates in this way to this day.

In 2018, there were over 430 institutional investors in Israel with the permanent presence, out of which 23% were non-Israeli. In the past, the native Israeli fund would be investing in early stages and the foreign funds would enter the game starting with round A+. These days, the situation is very different – even foreign funds without a permanent presence in Israel are often interested in investing in early-stage startups. This includes Corporate Venture Capital firms, typically more careful of investing at earlier stages. However, thanks to a growing openness and appetite for spotting winning technologies prior to their competitors, even those more risk-averse investors have been looking for early-stage deals. 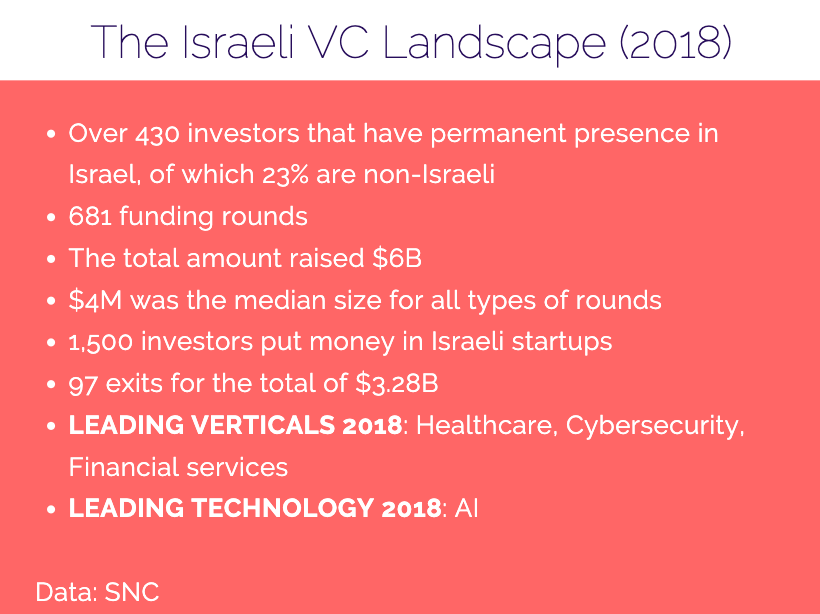 Fast forward to the year 2020, there is definitely no lack of startups to invest in as well as the investors that are willing to invest. Prior to the COVID-19 crisis, the Israeli investment market was very founder-friendly: there was more available funding in the market for strong startups than their financial needs. Many startups closed rounds of investing within 2-3 weeks. At the same time, investors complained that they could not finish even the most express due diligence without risking to lose a deal, sometimes with term sheets on the table within days.

Currently – in the midst of the coronavirus situation – VCs are definitely much more cautious to invest in startups so quickly. We will see whether the post-pandemic funding realm will get back to the former shape or will the latter have a dramatic effect on the industry.

It is often debated why VCs based in Israel manage to invest in good companies that become successful more often than those in other markets. I’m not sure if the numbers would reflect that – after all, venture capital is a high-risk activity and the Israeli VCs are prone to these risks to the same extent as any others. But it is definitely true that in the Israeli saturated technology market there are MANY startups to choose from, which makes it easier to come across a good solution with a significant market potential. Per capita, Israel does remain the leading startup ecosystem around the world with over 6000 startups existing in a small country of 8 million residents.

Moreover, many experts point to a capital efficiency of the Israeli investment ecosystem in comparison to other markets. According to iAngels, Israel’s value creation multiple (exit value divided by the amount raised until exit) in Israel equals 6.9x (compared to 5.9x in the U.S.). This offers potentially strong investor returns to investors choosing to put their money into the Israeli high-tech. The rounds of investments are on average smaller in comparison to the U.S., so the barrier of entry is lower and the ability to invest in more companies is possible. Then, the exit ratio for Israeli startups is higher than in the U.S. with 3% exists in the startup nation against 2% in the American market.

There are some unique traits of the Israeli VC landscape that differ from other places. Israel is a small place, which allows for a close-knit tech and VC community where everyone knows everyone. It makes it easier for investors to make themselves known and to properly “check” their deal flow and validate their choice quicker. The Israeli VCs often get themselves known by “paying-it-forward” – helping early-stage startups and giving them advice and feedback, even before these startups need their financing. 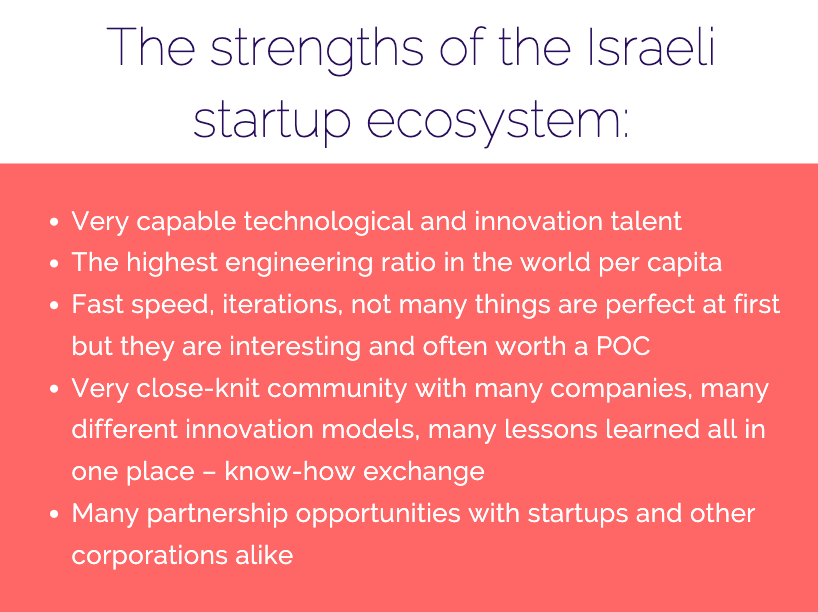 Also, there is a sense of cooperation between various VCs, not just pure competition. VCs would send one another deals and discuss opportunities with other funds more freely than in other places. Often, they would invest jointly with other funds. In these cases, it is in their interest to maintain close partnerships with other VC companies. This contributes to their speed of investing – if they join forces, they can finish due diligence processes quicker and make an offer sooner than other, competing funds. The Israeli startup and investment culture makes this market more open to cross-fertilization and cooperation – due to its size, openness and directness.

Venture Capital in Israel is composed of various stakeholders, including native VC funds and prominent local angel investors, foreign VCs with a permanent presence or those who come to Israel on a regular basis, incubator and accelerator programs that support early-stage ecosystem development and Corporate Venture Capital firms that are interested in sourcing strategic deal flow to create a win-win for their multinational corporations. There is definitely a level of competition but also a lot of collaboration between these entities.

So far in the recent years, there has been a significant growth in the number of deals and the amount of funding spent by the VCs in Israel. The COVID-19 contributed to a lot of uncertainty about the future, yet there are still over 150 funds that claim to haven’t stopped investing in great technologies. You can find the full list put together by Geektime and Fusion LA (the Israeli accelerator and VC fund situated in Los Angeles) HERE.

About the Author
Monika Rozalska-Lilo has co-created and until recently served as the CEO of CREATORS, an innovation lab based in Tel Aviv that supports organizations in developing and improving innovation practices. Monika’s expertise includes corporate innovation, startup ecosystems, ideation methodologies and building & facilitating innovation programs. Before CREATORS, Monika served as Deputy Director of TheHive by Gvahim, a startup accelerator program for international teams in Israel.
Related Topics
Related Posts
Comments