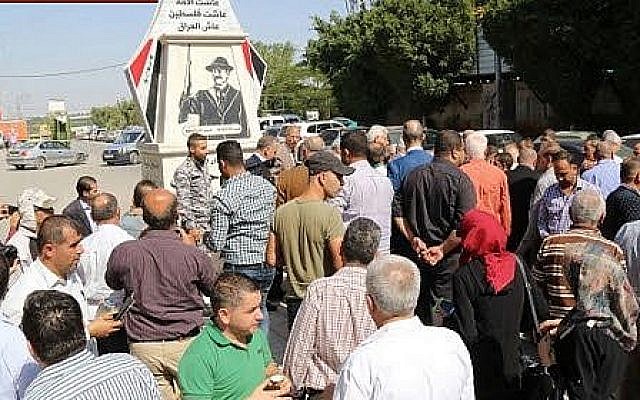 Inauguration ceremony of memorial to Saddam Hussein in the West Bank city of Qalqilya on October 18, 2017. (Qalqilya Municipality Facebook page)

While Americans have been arguing about tearing down statues that honor people who don’t deserve to be honored, Palestinian Arabs are doing exactly the opposite. Case in point: A statue honoring Saddam Hussein, the notorious dictator, terror sponsor and mass murderer, has been unveiled in the Palestinian Authority (PA) city of Qalqilya.

Technically, the statue was sponsored by the Arab Liberation Front (ALF), not the municipality of Qalqilya or the PA itself. But the PA’s district governor for the Qalqilya District, Rafi Rawajba, attended the unveiling ceremony. Rawajba is a representative of the Fatah movement, which PA President Mahmoud Abbas chairs.

You can see from photos that the statue is 20 feet tall, with lights so everyone can see it at night, too. And it is situated smack in the middle of a major street. If the mayor or Abbas didn’t want there, it would be gone in five minutes. 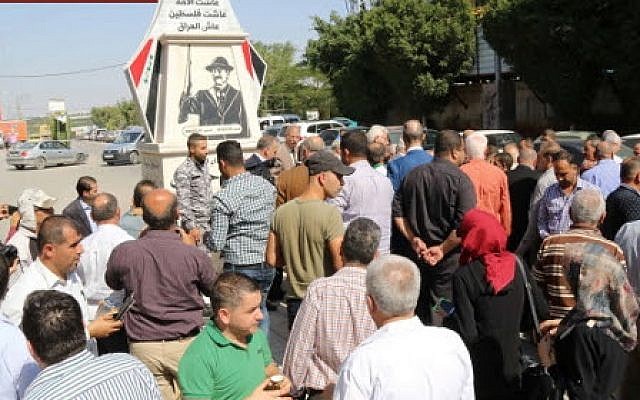 Inauguration ceremony of memorial to Saddam Hussein in the West Bank city of Qalqilya on October 18, 2017. (Qalqilya Municipality Facebook page)

In fact, the ALF has erected statues of Saddam in several other PA-controlled cities, too, and Abbas has not ordered them taken down, either. That’s because he was always one of Saddam’s biggest fans. Abbas could have written the Arabic inscription on the statue himself: “Allah is great, long live the nation, Palestine and Iraq, the Lord of the era’s martyrs Saddam Hussein.”

Just two weeks ago, the official Facebook page of Abbas’s Fatah included Saddam alongside photos of other Arab heroes in a college with the slogan, “From the sea of the blood of the Martyrs, we will create the State of Palestine.” On the 10th anniversary of Saddam’s death, last December, the Fatah Facebook page featured a memorial poster hailing Saddam as a “martyr” (shahid).

There’s even an entire “Martyr Saddam Hussein Square” in Ramallah, the PA’s capital city. I wonder if Abbas salutes it on his way to work.

The ALF is a small Palestinian terrorist group that was established in 1969 with Iraqi financial sponsorship. Remember those infamous $25,000 checks that Saddam sent to the families of Palestinian suicide bombers? The ALF was in charge of distributing the funds.

But the ALF’s record goes beyond handing out rewards to terrorists. It was responsible, for example, for a bombing on Jerusalem’s Ben Yehuda Street in September 1979, in which one person was killed and 58 were maimed. According to the Israeli police, the bomb was “set to detonate at a time when it would cause maximum civilian casualties,” just as “hundreds of customers were leaving the shops along the mail which close at 7 p.m. and other crowds were lining up for the first show at one of the many movie houses in the vicinity.”

No such luck. To this day, the ALF is a member in good standing of Abbas’s PLO. The ALF operates openly and freely in PA territory. It has never been expelled, disarmed or outlawed.

What can the US do?

Abbas and the PA received $357 million from the US last year. Abbas seems to assume that the aid will continue to flow, even if he allows anti-American terrorists such as the ALF to be part of the PLO, and even if statues of America’s enemies, such as Saddam Hussein, are erected in PA cities.

To judge by the non-reaction of the Trump administration to the newest Saddam statue, it appears that Abbas’s assumption may well be correct.

About the Author
Stephen M. Flatow is the father of Alisa Flatow who was murdered by Iranian sponsored Palestinian terrorists in April 1995 and the author of "A Father's Story: My Fight For Justice Against Iranian Terror" available from Devon Square Press and on Kindle. He is an oleh chadash.
Related Topics
Related Posts
Comments
Advertisement