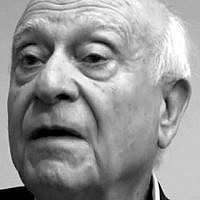 The Blogs
Joe Samuels
Apply for a Blog
Please note that the posts on The Blogs are contributed by third parties. The opinions, facts and any media content in them are presented solely by the authors, and neither The Times of Israel nor its partners assume any responsibility for them. Please contact us in case of abuse. In case of abuse,
Report this post.

I was born in “Taht El Takia” in the Jewish quarter of the old city of Baghdad in December of 1930. My mother tongue is Arabic. My education included the Islamic culture and history. Baghdad was my home and Iraq was my only country. I am 84 years old.

On May 6, 2003, members of the United States Armed Forces were looking for Weapons of Mass Destruction in Baghdad’s secret police headquarters known as the Mukhabarat. Instead, to their surprise, what they discovered in the heavily damaged and flooded basement of the building, were Iraqi Jewish artifacts. These included 2,700 books, some dating back to the 1500’s. They found Torah scrolls, prayer books, and tens of thousands documents. The Ba’ath Party, headed by Saddam Husain, looted and confiscated public and personal items from dozens of synagogues, schools and community properties. After their discovery, with the approval of the then- provisional Iraqi government, these destroyed remains of the once thriving, millennia-old Jewish community in Iraq, were brought to the United States in frozen containers.

After spending some three million dollars, the US government has restored and preserved these artifacts. They have been exhibited in Washington D.C., New York City, Kansan city and now in the Los Angeles area at the Nixon Library, Yorba Linda. These artifacts are digitized and can be viewed on the Internet.

The moment I stepped into the 2,000 square foot exhibit; the history of my childhood came alive. On display there was a high school certificate written in Arabic; it reminded me of my graduation in June of 1948. I was so excited to travel to America for higher studies. That dream evaporated when I was refused an exit visa.

Haggadah, (Passover script) from 1902, reminded me of our Seder, when my parents, six brothers and my sister sat for the festive dinner after reading the Passover script. The aroma of the chicken rice with slivered almond and raisins and the taste of sweet and sour, lamb stew with apricot still linger in my mind.

The Torah scroll, unfortunately stripped from the silver or gold that had covered the wooden casing, reminded me of my Bar Mitzvah when I carried the Torah. It was so heavy.

Other Arabic documents included letters from the Chief Rabbi, Sasson Kheduri, to members of the community board, reminding me of how close I felt to others in this old, Jewish community, how rich it was in culture, how we had so much solidarity and helped each other.

It was a bittersweet encounter; seeing the exhibits brought tears to my eyes. At other moments the exhibit filled me with joy. I was grateful to the American government for making my Iraqi Jewish heritage come alive again. The numerous petitions from many Iraqi Jews, our children, and grandchildren, to US government officials, pleaded with them not to return the artifacts back to Iraq. The Congress, in Bill 113, voted to renegotiate with the Iraqi Government to allow the artifacts to stay in the US. The visit to the exhibit reminded me of my 19 years of life in Baghdad.

Through the 1940s, Jews of Iraq numbered 150,000 but made up approximately 25% of Baghdad’s population. Jews were a major economic force in the country, and the Jewish and Muslim communities generally had a congenial relationship.

Regrettably, with the rise of Naziism, anti-Semitism began to take hold. The Farhud riots of June 1 and 2, 1941 a Middle Eastern pogrom occurred; Muslim mobs, aided by police and soldiers, in plain clothes, stormed the Jewish quarters in the old city, of Baghdad. They looted and burned Jewish homes and businesses. They murdered some 180 Jews and left hundreds injured. Many women were raped. I was eleven. The trauma never left me.

By November 1947, anti-Semitism and discrimination by government officials was regularized and implemented in earnest. Then, following the United Nations vote to partition the British mandate of Palestine into Jewish and Arab states, the oppression increased drastically. Iraq was one among five Arab nations that attacked Israel and unexpectedly lost. Zionism was added to the Iraqi criminal code as an offense punishable by death, and every Jew was a suspect.

After graduating from AL Aadadiah High School in Baghdad, I was accepted to three universities in the US. Because I was Jewish, I was denied an exit visa to leave Iraq. To be considered for an exit visa, I needed to deposit 3,000 dinars. Let me offer a comparison to demonstrate the enormity of the amount; at the time, an Iraqi working class family income was between 4 to 5 dinars a month.

Fearing for my life after some of my friends were arrested, I was fortunate to be smuggled out in December 1949. My father an importer of cloth, had to leave behind our family villa in the Al Alwiya district, his office and a warehouse full of merchandise.

Nearly all Jews from Iraq, Egypt, Syria, Lebanon Libya, Tunis, Algiers and Morocco had similar experiences. These ancient Jewish communities have in the 20th century virtually vanished from Arab lands. From a population of nearly one million Jews, today there remains some 5,000, mainly in Morocco (3,500) and in Tunis (1,100). They were stripped of their citizenship; their properties and assets were confiscated. About 600,000 ended up in Israel. The rest are scattered around the world. There has not been a single Jew from Arab land in a refugee camp for decades.

With the exception of the Jews from Iraq, the history of Jews from other Arab countries has vanished with them. Their artifacts were stolen, confiscated or destroyed. There are no records to show the world how they lived, their contributions to Arab culture and civilization, their influence and effect on their societies.

The only way these communities are remembered are through the occasional autobiography, oral history, or word of mouth from those who once lived there. In this sense, my Iraqi Jewish community and I are lucky. Saddam Hussain ended up keeping the best and most accurate documented testimony to the existence of Jews in Iraq. Although we have vanished, the last vestiges and artifacts of our community have not vanished. They are digitized and available to be viewed on the Internet.

About the Author
Joseph Samuels was born in Taht El Takia, the Jewish Quarter in the Old City of Iraq in 1930 and he now resides in Santa Monica, California. He is a member of the Speaker’s Bureau of JIMENA (Jews Indigenous to the Middle East and North Africa)
Related Topics
Related Posts
Comments