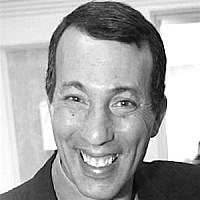 The Blogs
Stuart Klamen
Apply for a Blog
Please note that the posts on The Blogs are contributed by third parties. The opinions, facts and any media content in them are presented solely by the authors, and neither The Times of Israel nor its partners assume any responsibility for them. Please contact us in case of abuse. In case of abuse,
Report this post.

I was shocked and saddened to learn last Monday that the Chesed Shel Emeth Cemetery in University City, Missouri across the street from where I live, was vandalized. University City is a multi-ethnic suburb of St. Louis with about 35,000 people. The racial make-up is approximately 50% white, 40% black, and 10% others. There is a strong Asian presence, including numerous restaurants and stores within half a mile of the cemetery (dubbed “Chinatown”). There are six synagogues, two Jewish day schools and three cemeteries in University City, and I am influenced to this day from experiencing this diversity and melting pot growing up in University City.

I live so close to the cemetery that the police asked if I had home security video, which I did not. Last Monday, I went to the cemetery to see if the graves of my grandparents were damaged but fortunately they were not vandalized.

However, while I was there, I went to the vandalized area and I saw the tombstone of my friend’s grandmother toppled over. I did not know her, but I knew her son, Henry, who passed away in 2010 at the age pf 97. I remember him talking about the anti semitism he experienced when he was young and how he fought against it in another generation and another time. It saddened me to think of what he would have thought of his mother’s grave being desecrated.

Though I have no firsthand knowledge and I understand that it took a lot of force to do the damage that was done, I feel that it was most likely high school kids who committed this outrage, and it was not a systematic and well-organized act of anti-semitism. Even though I am aware there may be some copy-cat incidents — as in Philadelphia — I grew up in University City, and as a kid, I recall my fellow neighborhood youth talking about going into the cemetery — not to vandalize — but as a Halloween prank. I told them not to do it because my grandfather was buried there.

Later on, I was Executive Director of Beth Hamedrosh Hagadol Synagogue, which could be seen from the cemetery. One day students who walked by the synagogue on a daily basis, threw rocks and broke a window. I know for a fact it was those students because it happened between 3 and 5 pm on a weekday. The next day, I waited for the students to come by and offered a monetary reward for information, which was given, and which the police followed up on.

It was very heartwarming to see the amount of people from all over the local, state and the nation who came to the cemetery last Wednesday, to show their solidarity against anti semitism, I have never seen anything like it as people of all backgrounds marched past my house to the cemetery.

I realize there are many reasons not to approve of President Trump’s policies, however I have been greatly disturbed by the extreme vitriol against the President and his family and advisers, which are irrelevant to his policies. It reminds me of the vitriol, commonly targeted against Israel, on our college campuses and elsewhere in the United States. I was very concerned that it was only a matter of time until the anti-Trump rhetoric would be redirected against Israel. For example, at the University of Missouri last year, there was a guest lecture on the day the Chancellor resigned due to accusations of racism, which compared Israeli treatment of illegal African immigrants to Nazi treatment of Jews. Invited to speak at the University, the guest lecturer showed a slide, which on one side, had the sign “Arbeit Macht Frei” from Auschwitz-Birkenau, and on the other, a sign inviting African immigrants to sign up for work in Israel.

Ironically, as a result of the response to the cemetery vandalism, I am hopeful that anti-Israel forces on campuses and elsewhere, will be less likely to delve into anti-semitism in the future. Though I deeply appreciate the Far-Left’s involvement with the cemetery clean-up, I feel that their deep-seated conviction that President Trump is an anti-semite and a racist has fueled their adoption of this cause.

The bottom-line is that fighting anti-semitism has become such a cause celebre among the Far-Left that they will be sensitive in the near future to not being labeled as such. Now is the time for organizations such as Stand With Us and others, engaged in this fight on college and university campuses across the country, to double their efforts and strongly call out those who cross the line into anti-semitism. Now is the moment. Let’s seize it!

About the Author
Stuart Klamen is the founder of the Bergson Group an Israel advocacy group that works on uniting Christians and Jews through pro Israel advocacy through out Missouri.
Related Topics
Related Posts
Comments