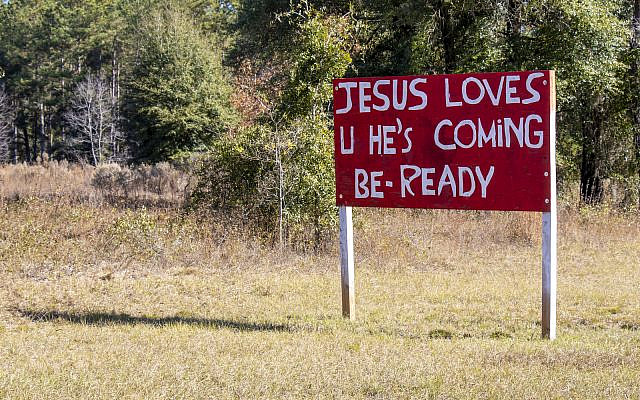 Illustrative: Sign along a highly in Jasper, Florida - November 24, 2021 (iStock)

I was driving south from New Jersey earlier this summer, anticipating my new pulpit in San Antonio.

Those who fly can’t truly understand the sheer size of the United States, where a three-hour plane ride can take three days by car. Nor can they experience the sometimes subtle but significant cultural shifts seen driving from state to state.

New Jersey to Delaware to Maryland … Virginia to Tennessee … a corner of Georgia to Alabama and Mississippi through to Louisiana, and finally into Texas: almost 2,000 miles over four days.

You can see the cultural changes on billboards proliferating, starting in Tennessee: ABANDON ADULTERY: CALL JESUS (with a phone number attached) … MARRIED COUPLES EARN 30% MORE THAN SINGLE PARENTS … COVER YOUR LEGS? TREATMENT FOR VARICOSE VEINS. These were three of my favorites.

I can’t help but wonder if the crosses are more than a symbol — that the Christians in these areas see themselves besieged by a central government thousands of miles away that seeks to deprive them of their rights, by immigrants who do not share their religion or values, and by a denigration of their way of life.

And I am reminded of my central Virginia high school principal who could accept that I was Jewish (five Jews in a school of 1,800 students), but couldn’t believe that I didn’t celebrate Christmas.

The Jewish population (and its power structure) is anchored in urban and suburban areas. But the broader population is almost evenly divided between rural and urban, and rural America is overwhelmingly Christian.

It does not help that we tend to see Christian America as stereotypes portrayed by the entertainment industry. But real people with real issues populate Christian America. In our arrogance, we do not credit them with sophistication (or sometimes intelligence).

Perhaps our worst mistake is the failure to realize that Christianity is not monolithic. Many Christians would be just as uncomfortable with these road signs as we are, but in our ignorance (and perhaps arrogance), we lump all Christians into one group.

True, even when we dialogue with fundamentalist Christians we find little ground for commonality. There is little we agree upon. But, we dismiss them at our own peril, for their America is just as real to them as ours is to us.