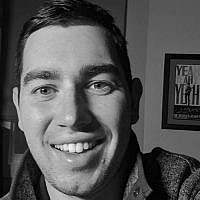 The Blogs
Ariel Wernick
Apply for a Blog
Please note that the posts on The Blogs are contributed by third parties. The opinions, facts and any media content in them are presented solely by the authors, and neither The Times of Israel nor its partners assume any responsibility for them. Please contact us in case of abuse. In case of abuse,
Report this post.

Six million Jews, it was the number I had heard each year at the annual Yom HaShoah ceremonies in school. It was the number I heard visiting museums dedicated to the Holocaust in Los Angeles, in Washington DC and at Yad Vashem in Israel. It was the number I thought about as I traveled through Poland and visited the communities, ghettos, camps and mass graves of our ancestors of whom so many we lost. But to even begin to understand how big a number that is, until this year, was not something I could begin to comprehend.

These past weeks have not been easy. Our lifestyles of comfort and routine were uprooted. We spent time alone in confined spaces. Many lost their jobs or had their daily schedules stripped of meaning. We lost so many of our loved ones, without proper opportunity to say proper goodbyes. For most of us a pandemic was something we never imagined, and it will be something that will reshape our future in many ways. As I write this on April 19, 2020 the death toll in the United States is 40,565. We watch the new and feel terrible sadness as we should because 40,656 is a really high number. As Yom HaShoah approaches I look at the number six million and I still cannot understand what it must have been like to lose so many, but I compare it to the number 40,656 and now I am now a little bit closer to internalizing what it must have been like.

On this week’s edition of 60 Minutes among topics discussed with New York’s team fighting the pandemic, it was mentioned that how morgues in New York City hospitals no longer have enough space to hold the influx of souls who perish each day. To properly hold the bodies, the city has needed to make use of 180 refrigerated trailers stationed outside hospitals to hold bodies until a proper burial is able to take place. Then footage was shown of the graves needing to be dug each day to hold bodies, and stories were told of the extreme measures the army is doing making house calls to families, which condolences, moving furniture and carefully removing bodies from homes to make sure each person is given a respectful and proper ceremony of burial.

As Yom HaShoah approaches, I compare those refrigerator trailers to the crematorium I witnessed in Auschwitz, and the mass graves of children in forests just beyond suburban polish towns. I start to understand it is not just six million who perished rather it was six million who were killed and taken from this world without an identity left behind. We may not be able to attend funerals, or visit loved ones in the hospital, or hold proper shiva houses, or say kaddish for those we have lost. But we have adapted, we had virtual funerals and zoom shiva visits, we are still able to commemorate and eulogize in a meaningful way.

Yes, is difficult to not go to minyanim, to not attend school in person, to not go to work and to have to walk around on the street wearing a weird mask on our face. But how lucky are we that today we have religious freedom to practice as we want! We can own whatever books or games or belongings which interest us, and we have access to the internet and phones and technology that enables us to be connected and together even as we are physically separated. How lucky are we that we have the modern medicine to battle this war as strong as we can, and that this suffering is the worst my generation has had to endure. How lucky are we that Jews can be doctors and we have hospitals with Jewish names and that we can have a global connection among our people that we can unite in trying times. How lucky are we that we have a Jewish State and a Jewish army today. For those in the camps, or the ghettos or hiding in the forest the quality of life and the value of life we can experience today seems like something, they could only dream about.

But then as Yom HaShoah approaches, I think about the fact that I still struggle to internalize the suffering that was among our people in the Holocaust. As a person who has had annual days of commemoration, visited multiple museums, spent dedicated course time in school, visited Poland and has sat in person hearing stories live from survivors I still struggle to understand the depth of the suffering we had. I will likely be part of the last generation with the ability to hear about the Holocaust live from the mouth of a Survivor. Now more than ever we carry the responsibility to remember for ourselves as well as to teach the future generations about the lives as well as identities that were stripped from us not so long ago.

About the Author
Ariel Wernick is a first year student at Yeshiva University, previous to that he spent two years learning at the Gush (Yeshivat Har Etzion) and was born and raised in Los Angeles, California. He enjoys hiking, running, learning, making grilled cheese and discussing stories that happened at Bnei Akiva summer camps.
Related Topics
Related Posts
Comments