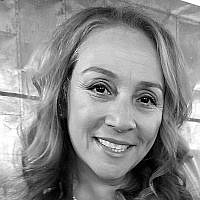 The Blogs
Susan Golkin
Apply for a Blog
Please note that the posts on The Blogs are contributed by third parties. The opinions, facts and any media content in them are presented solely by the authors, and neither The Times of Israel nor its partners assume any responsibility for them. Please contact us in case of abuse. In case of abuse,
Report this post.

Getting married later in life has it positives and negatives. Gone are the insecurities of the 20s and ambivalence’s of the 30s.

I married at 41. There were the thoughts of would it ever happen? Who would he be? Would his “baggage” be international (5 suitcases) or domestic (1 suitcase). We all hope for the latter! I got lucky. I married an amazing 38 year old. He was definitely a 1 baggage carrier, which was a great thing!

The wedding was beautiful.  The first year was not without issues, but for the most part we were good. No, great! Except, we both wanted a family. This was before egg freezing was so talked about and done. So we went to different IVF clinics until we found the doctor we felt comfortable “working with” to help us conceive.

After one and half years of trying, we took a break from the drugs, the costs and the emotional ups and downs. A winter party, a bottle of wine and two weeks later we were pregnant!

My husband and I discussed a CVS, amnio or no testing. We could lose the baby on both tests. All other tests showed everything was fine. So it was, right? I was over 40. My sister, my sister-in-law, her friend, my friend, my friend’s cousin all had babies over 40 and they were all perfect babies. All the tests showed nothing was wrong with our baby. “Another hurdle” my husband would say after each test. So we opted out of the CVS and amnio. We waited.

August 23, 2011 at 8:11pm our little girl was born. “We did it!” my husband said as if we just finished an almost 10-month race. “Please don’t say that yet. Let them tell us everything OK” I said to him with intense fear.

The little girl I waited for, longed for, all my life. Waiting just a little longer would mean that everything was OK, right? As the doctor approached what seemed to be in slow motion, he said, “We think your daughter has Down Syndrome. We suggest genetic testing.” Then he was gone.

About the Author
I have been a Director of Operations for a childhood obesity program in East New York/Brownsville for the 12 years. I have recently left that career, and I am currently an independent medicaid broker for self direction. I am also the co-author of, Confessions of a Carb Queen, published by Rodale.
Related Topics
Related Posts
Comments