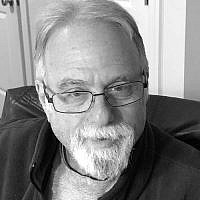 The Blogs
Phil Cohen
Apply for a Blog
Advertisement
Please note that the posts on The Blogs are contributed by third parties. The opinions, facts and any media content in them are presented solely by the authors, and neither The Times of Israel nor its partners assume any responsibility for them. Please contact us in case of abuse. In case of abuse,
Report this post. 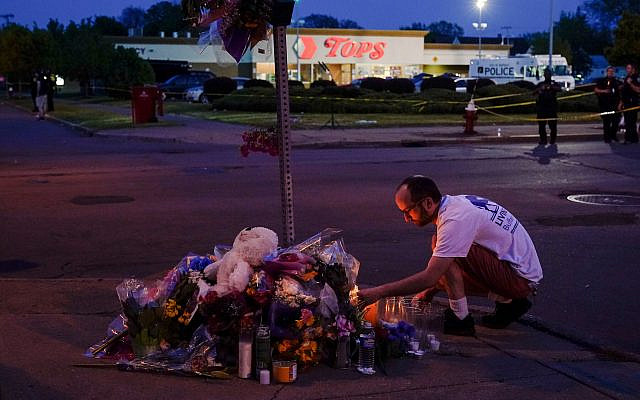 A person pays his respects at a makeshift memorial outside the scene of a shooting at a supermarket in Buffalo, New York, May 15, 2022. (AP Photo/Matt Rourke, File)

Apparently, Gendron discussed his plan for weeks on the Discord app in a private room. He published a 180-page manifesto there, and drove 200 miles (322 kilometers) from the bucolic town of Conklin, NY to the 14208 ZIP code and predominately Black neighborhood, and walked into a Tops Market.

To walk into a supermarket with a semi-automatic rifle to murder and maim, in this case, African American people — what kind of motivation is that? I’ll tell you what kind. “Motivated” here is a euphemism for a racist White supremacist bastard with a gun who carefully planned his moment, and then broadcast it live via Twich, a video streaming app, with which one can stream a birthday party. Or a mass murder.

The liberal columnists will decry the availability of guns in American society, the ability for most anyone to walk away from a gun show with hunting rifles, pistols, semi-automatic rifles, all with a minimum of identity check.  At a gun show there are tables and tables filled with pistols, racks of rifles. There are millions more guns in American than there are Americans. The country abounds with enough privately held weaponry to fight a small war. Heaven help Russia should Putin invade us. He would be defeated in a matter of hours.

The shooters at these mass murders that regularly dot the geography and chronology of America are not all haters of Black people immersed in White supremacist ideology. Some hate Jews and are immersed in White supremacist ideology with a touch of Replacement Theory. Some hate Muslims with a taste of the same. Some hate gays. Some hate indiscriminately. Some don’t exactly hate. Rather, these boys suffer from a vast alienation from their neighbors, their fellow students, the guy down the block who didn’t return the lawnmower.  Well, maybe that’s a form of hate, too, an undifferentiated animosity of any member of the homo sapiens crowd who happened to cross his path. You know, I hate therefore I am. I hate therefore I’ll pick up a semi-automatic rifle with augmented bullet capacity and make history at your expense. I’ll be on your mind, for a few days, anyway, as history’s memory is always attracted to the next mass shooting, just around the corner and up the block. (By the way, it’s always a “he” you’ve likely already noted. To my knowledge, not one woman has engaged in a mass shooting.)

And so, on a frighteningly regular basis, America, and only America, witnesses mass shooting after mass shooting, 10 dead, 20 dead, 45 dead while we look on stupidly numbed by the bizarre and tragic sight of men, women, and children falling victim to a guy with a 180-page manifesto and a gun he bought online, in a store, or at a gun show, because it’s his damn right, guaranteed by the Second Amendment to the Constitution. Lest my reader feel a tightening in his or her gut by the citation of the sacred Constitution of the United States, let me remind my reader that this same document enshrined slavery and granted second-class citizenship to women until the wisdom of a later moment in history amended those errors.

What, you ask? Are you suggesting amending the Constitution and eliminate the Second Amendment, the one that guarantees guns so we might have well-regulated militias to protect us from the British? The one that enables us to purchase pistols that we can legally carry in our pocket in more and more states? Or purchase hunting rifles and, save for a brief historical moment, semi-automatic rifles?

What majority of voters in this country would permit such a naïve act? Yes, I confess, the self-interest of too many gun-toting folks, men and women, who need their pistols to use against the guy in the hoodie who’s going to invade their home one dark night—too many of them live by Amendment #2.

Give up my hunting rifle so I can no longer hunt deer, squirrels, and moose? Ain’t no one gonna take away my gun. It’s my God-given right, guaranteed by a document written by a bunch of guys most bedecked with wigs, many of whom owned slaves, in Philadelphia in 1789.

Folks, we’ve been living through this endless series of nightmares far too long to hold any hope that there exists in the United States the rational critical mass of good citizens willing to eliminate the Second Amendment and get rid of the guns. Let’s do that and then figure out how we can issue rifles to inebriated hunters out for the weekend to kill deer to become hood ornaments for the ride home.

The best we seem able to do is mumble, make pallid gestures to pass toothless laws, write a letter to the editor, and look helplessly down at the ground every time another racist, antisemite, homophobe, Islamophobe, or just some good ole hater walks into the mall, the church, the synagogue, the nightclub, the school, or the supermarket and pulls his constitutionally guaranteed trigger and kills some more people who were just out to have a nice time.

It’s been going on for years, and nothing’s changed for the better.

This war is long over, ladies and gentlemen, and the good guys lost.

About the Author
Phil Cohen is a Reform rabbi, a scholar of Jewish thought, who writes on Israel, theology, bioethics, and parshanut. He is also an author of fiction, with many online publications and two forthcoming books, a sci-fi novel and a book of very short stories. He lives in Greensboro, NC with Betsy Gamburg and their rescued greyhound Maggy. They are the proud parents of Elly and Talia and, as of the end of 2017, Ava Ruth. He serves as rabbi of Temple B'nai Israel, Albany, GA.
Related Topics
Related Posts
Comments