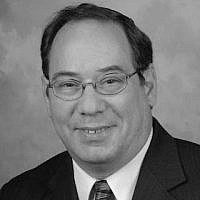 The Blogs
Avram Israel Reisner
Rabbi Emeritus of Chevrei Tzedek Congregation, Baltimore, MD
Apply for a Blog
Please note that the posts on The Blogs are contributed by third parties. The opinions, facts and any media content in them are presented solely by the authors, and neither The Times of Israel nor its partners assume any responsibility for them. Please contact us in case of abuse. In case of abuse,
Report this post.

Step one — seat the Knesset.

Step two — pass the proposed law prohibiting a Knesset member under indictment from serving as Prime Minister. (This should not be hard if the next steps have already been negotiated).

Step three (this is all-important) — Likud, recognizing the law and seeing an opportunity, chooses another member as party leader to replace Netanyahu, who then presents himself to the President as a candidate to form a government, in the lead of the largest party, with 30 seats.

Step four — That candidate presents himself to the powers that be at the other parties as 1) the compromise candidate who has not been sullied by the fighting between the other candidates, and 2) willing to form a kitchen cabinet that will have Prime Ministerial power which will make final decisions by a simple majority — made up of the Likud Prime Minister along with Yair Lapid (Yesh Atid — 17 seats), Benny Gantz (Blue and White — 8 seats), Naftali Bennett (Yamina — 7 seats) and Gideon Sa’ar (New Hope — 6 seats). Such a coalition has  68 seats — a clear and strong coalition, with a right-wing bent (to assure the center-right), and, coincidentally, not reliant on the ultra-Orthodox.

Step five — with that coalition in place and secure, it will be possible to add Yisrael Beytenu, which would have the secular government without Netanyahu that it has demanded, or the religious parties, without coercive power over the coalition,  or labor and meretz — or even the Arab parties, if reaching for a global coalition is deemed the right thing to do from a position of strength.

The point is, without Netanyahu and with a little humility, there is a stable centrist government available for the taking. Are fifth elections, again most probably inconsequential, really a preferable choice?

About the Author
Avram Israel Reisner is Rabbi Emeritus of Chevrei Tzedek Congregation. He has a PhD in Talmud and Rabbinics from the Jewish Theological Seminary.
Related Topics
Related Posts
Comments