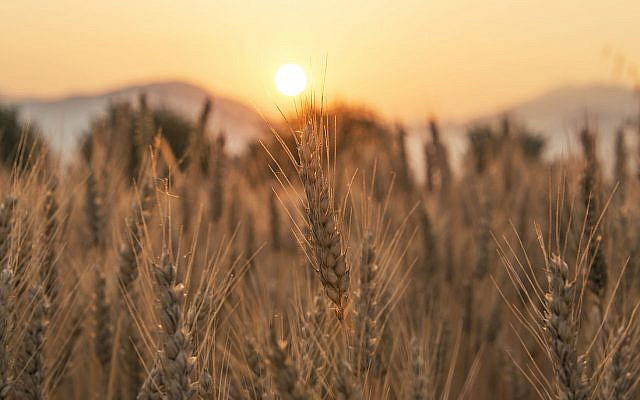 As a vegan for 26 years and an observant Jew for 23 years ago, I find it absolutely fascinating that every year during the period known as the “9 Days” in the Jewish calendar the observant Jewish world goes vegetarian.

If this is news to you, allow me to explain.

For three weeks every summer, from the 17th of Tammuz to the 9th of Av in the Jewish calendar, Jews observe a period of mourning over the destruction of the First and Second Temples that stood in Jerusalem thousands of years ago as well as other tragedies that have plagued the Jewish people throughout our long history.

This mourning period is characterized by refraining from certain joyous and pleasurable activities such as weddings, buying new clothes, getting haircuts and listening to music. Once the Hebrew month of Av begins, as it did this past Shabbat, additional restrictions are taken on including not swimming, not washing clothes and not drinking wine or…eating meat.

We’ll get back to that shortly.

These changes are meant to help us stay focused on the idea of mourning at this time. But the truth is that Judaism isn’t really into the idea of crying over the past, since the past can’t be changed. Rather, we are encouraged to look around our world today and open our eyes to the fact that just like there existed brokenness in our past, there still exists brokenness in our world today. And it’s over that brokenness that we’re really supposed to be mourning.

Once we become aware of this brokenness we are meant to move on to the next and more important stage of this time period: teshuvah.

Teshuvah is a powerful idea in Judaism. While it is often translated in English as “repentance”, the act of expressing remorse for one’s past mistakes and misactions only captures a small part of the essence of what teshuvah is really about.

In order to more fully understand what teshuvah is about, it’s important to know that the word is rooted linguistically in the Hebrew word for “return”, the deeper message being that when we take an honest look at ourselves and admit to the things we have done wrong, and are still doing wrong, when we have true remorse and commit to changing our ways for the good, we are “returning” to our truest and highest selves according to God’s original and ideal vision of us and for us.

The same is true on the national level. Especially during this unique time of the “9 Days” during which there is a heightened focus on teshuvah in the Jewish nation, we are also meant to focus on what we as a nation can do better, to be honest with ourselves as a collective and notice where we are falling short of our ideals and intended mission in this world.

And while there is a long list of ways in which we can change for the better, one of those ways undoubtedly is how humans treat animals in the industries that raise them for food.

Just the other day I went to visit a number of large cow sheds and chicken coops in my area and, though it was hardly the first time I have seen them up close, I was once again shocked and deeply saddened to see how the animals are forced to live just to ensure the continuous supply of meat, dairy and egg products in our food supply.

I saw cows laying in mud mixed with feces and urine a foot deep, with feces clinging to their skin. I saw chickens stuffed into cages, destined to live their lives perpetually standing or laying on metal wires. I saw baby calves trapped inside spaces that they outgrow so quickly that they are unable to even turn around. All of this pain and suffering just so people can fulfill a short-term craving for a short-lived taste.

If we go back to the idea of teshuvah, of returning to our original ideal selves, when we look into the Torah and see the original diet given to humans by God, we see that it was a completely plant-based diet. We were originally meant to and were created with the biological ability to survive without resorting to animals for food. Even once the next diet was given generations later that did allow for eating animals, other laws were introduced to ensure that we act kindly and compassionately towards animals, recognizing that the same Creator who created us also created them.

But these laws of kindness and compassion are completely ignored and trampled upon by the modern industrial meat, dairy and egg industries. And, yes, even the kosher ones.

And that’s why I find it absolutely fascinating that specifically during this time period we Jews are directed by our tradition to come closer to our original God-given diet by refraining from eating meat. The message I hear in this is this: as we use these days to become more aware of that which is broken in our world, to feel remorse over the ways we contribute to that brokenness, and to focus on ways we can change our behavior in order to fix that brokenness, we are meant to also look specifically at our food choices and, being honest with ourselves, become more aware and better understand how they contribute to our broken world. To see how what we eat is causing pain and suffering to God’s creatures and literally destroying our world on many levels.

Jewish tradition teaches that on Tisha B’Av, the end of the Nine Days and the actual day the First and Second Temples were destroyed, making it the saddest day in the Jewish calendar, the light of the Moshiach/Messiah is born. This idea of light shining from the darkness and destruction giving birth to renewal is such a fundamental Jewish belief.

My hope is that refraining from meat during the Nine Days will transform the darkness of this time period into light as more people realize that it is not only possible to eat a meat-free diet, but that it is also easy and tasty and healthy and overall better for us, our world and, of course, the animals.

Let these Nine Days not only be about mourning over our broken past, which can leave us paralyzed and helpless. Instead, let them inspire us to fix the brokenness of our times and to alleviate the pain, suffering and destruction that exists in our own days. Let them be an opportunity and a catalyst for us to make daring and important changes in our lives, bring ourselves and the Jewish world and eventually the entire world closer to its original plan in order to better carry out its intended mission- creating a world based on love, kindness and compassion for all…including animals.

About the Author
Akiva Gersh is the editor of the book "Becoming Israeli" (www.becomingisraeli.com), a compilation of blogs and essays that speak of the inspiring and the sometimes wacky and crazy experience of making aliyah. Akiva himself made aliyah in 2004 with his wife Tamar and they live in Pardes Hanna with their four kids. He teaches Jewish history at the Alexander Muss High School in Israel in Hod HaSharon. He is also a musician and in 2010 formed Holy Land Spirit, an uplifting and spiritual musical experience for Christian groups visiting Israel.
Related Topics
Related Posts
Comments
Advertisement