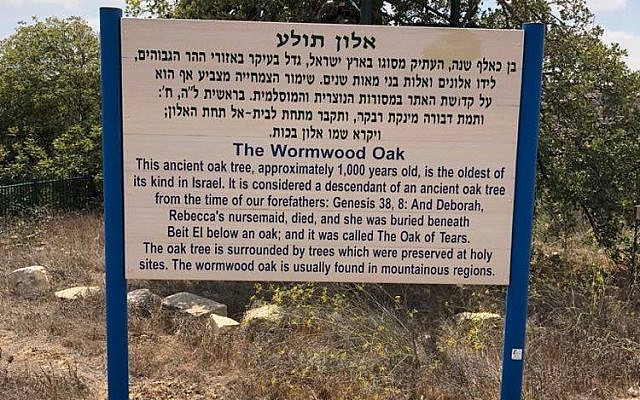 Parshat Chayei Sarah (Breisheet 24:59) ends with Rivka leaving her home in Padan Aram to marry Yizchak: “So they sent off their sister, Rivka and her nurse along with Avraham’s servant and his men.”

At the end of Parsha Toldot (Breisheet 27:43-45) when Esav started making plans to kill his brother, Rivka told Yaakov:

Now, my son, listen to me. Flee at once to Haran, to my brother Lavan. Stay with him a short time, until your brother’s fury has subsided. Until your brother’s anger against you has subsided, and he has forgotten what you did to him. Then I will send for you and bring you back from there. Let me not lose you both in one day!

In Vayetzei, After Yaakov and his family safely arrive in the Land of C’naan, a verse pops up that seems to be out of place (Breisheet 35:8): “Devora, Rivka’s nurse, died, and was buried under the oak below Beit El; so it was named Alon Bachut (The Weeping Oak).”

Was Devora who is mentioned here the same nursemaid that Rivka had when she was a child? If so, what was she doing with Yaakov’s family now and why was such a big deal being made about her death?

Rashi asks how Devora ended up with Yaakov and brings an answer from Rabbi Moshe Ha-darshan: Rivka promised Yaakov (Breisheet 27:45) “Then I will send for you and bring you back from there.” Rivka fulfilled her promise by sending Devora to Yaakov in Padan Aram to tell him to leave that place. Devora died on the return journey.

Rashi also brings an Agada from Breisheet Rabbah 81:5 which states that Yaakov received news of another death, for he was informed that his mother, Rivka, had died. In Greek “alon” means “another”. Rivka’s death was kept secret in order that people might not curse the mother who gave birth to Esav (Midrash Tanchuma, Ki Teitzei 4).

Ramban explains that Yaakov wept and mourned for his righteous mother who had loved him and sent him to Padan Aram but was not privileged to see him when he returned. Therefore, God appeared to him and blessed him in order to comfort him just as He had done with Yitzchak, following the death of Avraham. With reference to both of them the rabbis taught that He gave him the blessing of consolation addressed to mourners. Proof for this is that which is said below “And Yaakov came unto his father to Mamre.” If Rivka had been there, it would have said “to his father and his mother” for it was she who sent him to Padan Aram and caused him all the good for Yitzchak commanded him to go there at her advice.

We see from here that the focus on Devora’s death was to cover-up Rivka’a death in order to make sure that her name was not disgraced. The naming of the spot, Alon Bachut reminds us that there were two reasons to cry at the time, for the death of the dedicated nursemaid, whether she was the original nursemaid or not and for the death of Rivka Imenu.

Unfortunately, in the Tanach, there were more reasons to cry at that spot. In Shoftim (Judges) 2:1-5, the tribes were rebuked for not breaking apart the altars of idol worship. They did not listen to God and did not keep their part of the bargain. They wept and the place was named Bochim (Crying).

In Melachim I 12:28-31, King Yeravam made an alternative to the Beit HaMikdash (Temple) in Jerusalem by placing golden calves and bamot (high places) in Beit El and Dan leading the northern tribes to idol worship.

Today, a 1000 year old Oak tree, considered a descendant of the ancient oak tree from the time of our forefathers stands in Beit El. When we visit the tree, we are taken back in time to the day when Yaakov stood near that spot weeping over the death of his mother, Rivka.