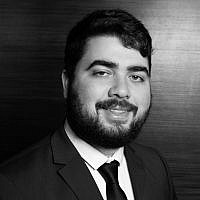 The Blogs
Tal Zelinger
Apply for a Blog
Advertisement
Please note that the posts on The Blogs are contributed by third parties. The opinions, facts and any media content in them are presented solely by the authors, and neither The Times of Israel nor its partners assume any responsibility for them. Please contact us in case of abuse. In case of abuse,
Report this post. 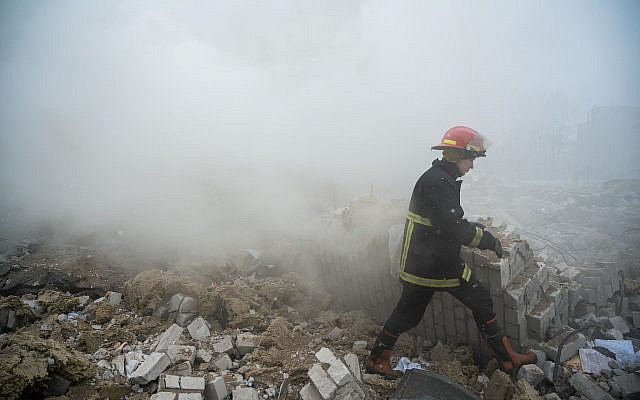 Zhytomyr, Ukraine 4 March, 2022 - Consequences of the shelling of school No. 25, in Zhytomyr

Since the start of the war in Ukraine, I have been silent, not sure what to write, I think I was in shock, because I didn’t think a war in this scale will happen again in Europe, and even when it did start, I didn’t know what to write, although I had so much to say.

The scenes we see throw me back to my great grandparents’ stories, same districts, same cities, different year. My great grandparents are no longer with us, but the aggression that they saw 80 years ago, came back to their childhood cities, of course not in the same level they experienced, but it seems humanity haven’t learned a thing.

Since the 24th of February, the western countries started coming together to fight Russia, if not with boots on the ground rather financially and materially: sending money to Ukraine, imposing different sanctions on Russia, supplying weapons and more. We can see it as a way for the European countries and the West to fund the Ukrainian cause as much as they can, from the point of view that if the Russians will break the “Wall” of Ukraine and continue west, it will mean a total destruction, firstly for Russia, which will face NATO, and secondly for the European countries that Russia will invade to until it will be stopped by NATO, and who really knows what will happen in the moment Russia and NATO will fight each other. To our point, Western countries rather supply everything they can (of course with some limits) to Ukraine so the war will stay there and not reach their doorsteps when they will have to face the Russian Bear by themselves.

We can see the current war as a new challenge for the United States, as it tries to focus on China, and closing the deal with Iran, now it also needs to deal with Putin who decided to start a war against Ukraine and challenge the US power. Western intelligence have warned us for weeks if not even months that Putin is determined to invade Ukraine, but still western leaders kept begging Putin not to launch the attack in their different Moscow visits, instead of preparing for the worst to come.

Since the start of the war, I had the chance to meet and talk with different diplomats and officials from Europe that said similar things to what I wrote above, Europe cannot see Ukraine fall for Russia. The countries on the border of Russia fear the most, but sure they will be protected by article 5 of NATO. We see countries start to build up their military so they will reach the 2% of their GDP requirement from NATO, for example Germany is rebuilding its army, something we have not seen in decades, some fear of that, but it should bring Europe to feel safer and less relying on the US.

In bad there is good, democratic countries come together and express their shared values for life, liberty, democracy and protecting life, we all can’t stand the atrocities that happen in Ukraine, and it seems like the West is uniting around one goal, to end the war in Ukraine. Russia’s war against Ukraine even brought more western democratic countries wanting to join NATO,  as we see Sweden and Finland application to join the military organization, it will end over 200 years of Swedish non-alignment, and Finnish neutrality following World War 2.

The rise of military buildup in Europe brings great opportunities for Israel, as more countries seeks to buy different military systems and weapons to up boost their military.

Israel was found to be an important player in the Russo-Ukraine war as Prime Minister Bennet found himself taking flights on Shabbat to speak with Putin, as Israel is found to be the only western democratic state that still holds good relations with Russia, and even Russian officials said that they don’t see Israel as an “enemy state” like they see other western countries.

Israel is in a challenging spot, on the one hand Israel always must firstly take care of its interests in the area, as Iran tries to build up its forces in Syria, which Israel will not allow it to happen. Israel has to be in good terms with Russia due to Russia’s 2015 intervention in the Syrian Civil War when Russia entered Syria , so it can interfere with the Iranian aspirations in the region, as mentioned by foreign sources. On the other hand Israel wants to be on the good side of history, with the West, as Israel is a Western democratic country with shared values, and it can’t be seen like an assisting state to Russia in these times.

The West is coming together, some more than others, but all want to see the unnecessary bloodshed ending as soon as possible.

About the Author
Tal Zelinger is the Founder and President of The International Diplomacy Initiative, member of the Global Shapers Community of the World Economic Forum, and a student of Law and Government at Reichman University. His interests focus on public diplomacy, current foreign affairs and politics.
Related Topics
Related Posts
Comments