Oh man, I really fucked this one up tonight.

The kids are getting new beds tomorrow.

I guess you don’t know this, but for the last forever, when the kids are with me, they sleep together on a futon.

It started because the landlord gave us a futon and we were poor, and then it turned into this thing where it was cozy and sweet, and she’d end up with her foot flung over his stomach, or he’d end up with his arm across her face, and usually I’d end up on the futon with them, too, sometimes holding one, or both, or neither, and it was sweet.

The thing is, my kids haven’t had it easy. Their parents split up when they were babies — my daughter was three and barely out of diapers, and my son wasn’t even two. In the beginning, they lived with their dad in the house we used to live in, in the bedroom we built out of Ikea furniture and things from Home Center, the one with the lilac walls (I chose the color), and the pictures we hung.

I didn’t really have a place. I stayed with friends — I sublet an apartment over on Ussishkin for a few weeks. Then I got this place over in some strange little pocket in Tel Aviv where the whole entire world smelled like cholent and laundry detergent, but I couldn’t take the kids there with me because their lives revolved around the kibbutz where my ex lived.

It took time — but eventually, we found this caravan in a big yard under a fig tree with a futon in the living room where my kids and I slept.

The first winter there, when the roof leaked all the time and I taped plastic bags to the ceiling, when I washed the same plates over and over again because we only had two, when I hung old family photos on the wall as if we planned on staying in the same place for a long time, we would all fall asleep together on that futon, and we learned how to be a family of three on our days together.

The walls were cardboard with a coat of plaster, but we stayed mostly dry in the winter and cool in the summer, and it was home.

And then the landlord knocked on my door one day and said, “You’ll have to move, be’ezrat Hashem,” because apparently our caravan wasn’t legal, and can I just tell you? My stomach fell, because I didn’t know where to go that would be close enough to the kibbutz, and the idea of moving while those cardboard walls we had nailed pictures on were torn down made my breath catch in my throat.

But then the neighbors in the back — the ones behind the wall with the vines that bloomed with bright orange flowers in the winter, the ones that had three proper bedrooms and a real kitchen and space in the living room, moved out, and, “Be’ezrat Hashem, you can move in there,” the landlord said, and so we did.

The futon came, too — tucked into a corner in the big bedroom where the kids would sleep, and they slept there that first night.

That was the night the Gaza War started for real, when we had air raid sirens for the first time in our region and we ran to the bomb shelter night after night.

That was the night we became real Israelis — the low frequency hum of a vacuum cleaner is the same sound the siren makes when it starts up, and it sends our pulses racing through our veins.

Warmth and companionship, too, and sometimes, they’ll chat in the middle of the night when they’re both asleep because they’re sharing a dream.

Because that’s the thing you have to understand about kids who have divorced parents:

Some days, they’re with their dad.

Some days, they’re with me.

But they are always together.

But then my kids — my wonderful wonderful kids — can be total assholes sometimes, and present a united front against me:

“MAMA, You can’t punish my sister!”

“How can you get angry at him, Mama?”

Which is exactly as it should be.

And they still want me to tuck them in, and lie next to them on the futon right in the middle, while I tell them the story about Laughing Boy, or we sing “Come As You Are” by Nirvana or “Umbrella” by Rihanna. That’s our jam.

But they’re getting bigger. He still sleeps with a stuffed whale under his chin, but he’ also won first place in a judo competition. Her legs are so long now, and she comes up to my neck. She spends time brushing her hair.

And they see the differences that each day brings even if they can’t articulate it, and I know this because lately they’ve piled their stuffed animals between them, as though to separate the futon into two special beds.

So it was time, and my dad and my dad’s credit card and I went to the furniture store last week, and we got them. They’re white and pretty, and you can separate them into two beds if you want.

But even if we keep the bunk beds as they are — which is the plan — it’ll still be a separation. She’s on the top, he’s on the bottom. Unless they decide to change for one night. But they won’t share a futon any longer, side by side.

And here’s where I fucked up.

Tonight is their last night in the big old futon.

When I said something about that, my daughter started breathing fast, and she said, “This is hard for me because change is hard for me.”

I DID hug her.

But then we all went to bed churlish.

My son fell asleep within two minutes, but my daughter stayed up, heaving heavy sighs and rolling her eyes and shooting down my feeble attempts to fix things.

And here’s where I went wrong:

I didn’t really try to fix things after that. I didn’t stay in bed with her.

We should have had some sort of ceremony in that futon to honor the family we were — the struggling wild family in the caravan that was torn down, the asymmetrical misplaced family with the mother that spoke no Hebrew. The Americans. Except not really.

We should have talked about it — about who were were, and who we are now.

And we should have done something to honor this change, too.

We aren’t the same family that could all fit on that mattress comfortably for a full night’s sleep. Even if we tried, we couldn’t. Their legs are longer and their bodies fill more space, and it’s time.

She’s going into fourth grade, and he’ll be in third.

They do homework now, and they take the bus, and they walk alone sometimes, and their world has stretched beyond these walls and beyond our village and it’s time to change.

But I let that change happen without anything to mark it — no song or ceremony or bedtime story about the little family that slept together through the winter storms, and the rain of rockets,  and so much uncertainty.

Because maybe that change was so soft and gradual, that this is just like shedding skin cells, and being exactly the same, but different.

But still, I feel bad — and I want to wake them up right now and tell them how sorry I am for their cleaved life — for the small caravan with the leaky roof, for all the hours I work, and the mac and cheese dinners, and everything I’ve fucked up including tonight. But I’ll let them sleep through the night as sweetly as they can together…

And I’ll crawl in next to them, and we’ll wake up like this, as we were back when we started all over again. 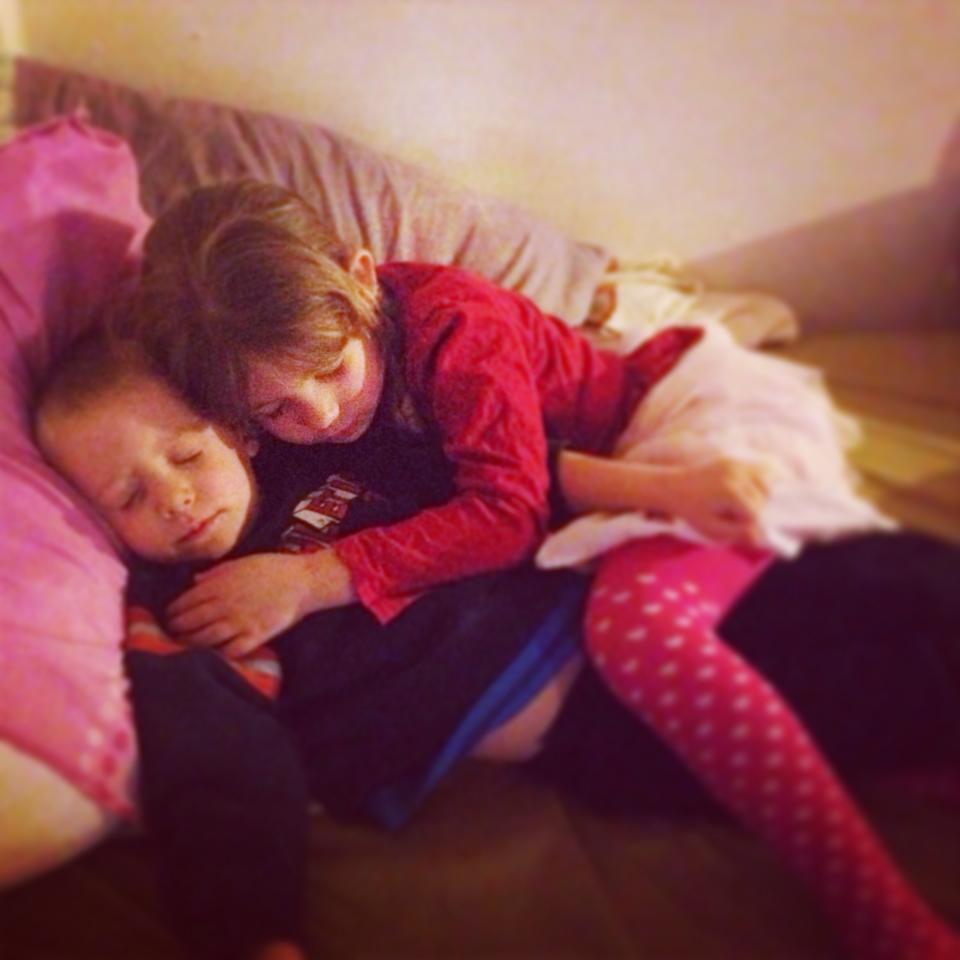