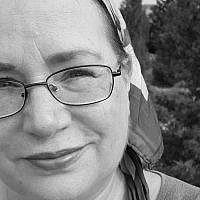 The Blogs
Loranne Laird
Apply for a Blog
Please note that the posts on The Blogs are contributed by third parties. The opinions, facts and any media content in them are presented solely by the authors, and neither The Times of Israel nor its partners assume any responsibility for them. Please contact us in case of abuse. In case of abuse,
Report this post.

Moshe was possibly my bashert, although he refused to marry me and went away and died alone. He was a warrior, having fought in the 6 day war in a tank battalion that went all the way into Egypt, and one of very few who returned alive, still cursing Moshe Dayan, 40 years later.

He was a father of 4, a grandfather, an engineer, and a human being of surprising gentleness.

He moved to the new state of Israel when he was 11 years old, his family having survived the Nazis by moving to Russia, then after the war back to Lithuania where his infant brother was almost murdered by Jew hating doctors. They found they had to survive post war anti Jewish sentiment. With nowhere in Europe safe for Jews, they came to Israel.

Nostalgically he talked of growing up in the 50s and 60s in the rebirthing of the nascent State of Israel. “We walked everywhere, from one end to the other. We were claiming the land. We, the outcast of Europe, with our guitars, our vision, our gardens, our farms.”

His hazel eyes would light up, twinkling with mischief. “It’s too bad you weren’t there, then. I’d have known what to do with you!”

We traded camp coffee recipes over a campfire by the Missouri River, relating fond memories of happier times with our kids. I couldn’t figure out why he kept pouring the coffee back and forth and adding crazy amounts of sugar, until I had Bedouin coffee here in Israel. We hiked Missouri, canoed, and went to concerts, for three happy years. He saw life through clear eyes, and was kind in his manner.

He tolerated religeous ritual as a connection to his family, but confessed while lighting the Chanukah menorah, he “was really only here for the songs.”

But he was careworn from having taken his father with Alzheimers into his home for the end stages of his life. He lost his job and his savings and went into debt from his father’s medical bills. He was bitter about his divorce and heartsore about his children. Fiercely proud of them, he felt he had given his all for them, in return for minimal contact at the end of his own life.

In the end, he was afraid to take on me with my son about to become bar mitzvah and my young girl child whose beauty promised to be a serious challenge in the future. He was pessimistic about his earning potential. No one wanted to hire an innovative engineer just turning 60. Hunching his shoulders over, he drove away in his beat up whatchamacallit car, (drove crazy, like a Russian), and I never saw him again, although we could read each other’s minds even long distance, and I believe I was on the phone with him as he expired, although I didn’t realize it until almost 5 years later.

Today, I stood on the rolling hills of Binyomen inside the barbed wire that makes it possible for me to live here, and I told Moshe, “I finally made it, but you aren’t here, and walking the land is a little more complicated now, with all this barbed wire. I wish you were here.”

Meanwhile, back in Kansas, my best friend Kate, has children and grandchildren going to college where they are indoctrinated with lies about this beloved country that Moshe’s battalion gave their lives for. I won’t rehash the story of the 6 day war; we all know it.

I’m more concerned with this current smear campaign against this country which is succeeding all over the world. It smears not only Israel, but Moshe, and standing beside him, all the beautiful proud young Israelis in the IDF who put their lives on the line to defend this tiny slice of land.

People believe lies about massacres of children and random demolition of Arab homes, and, well, and. It goes on and on. Unbelievable lies spoken and believed every day about this country that is far more likely to err on the side of harming innocent Jews and certainly Jewish homes, than ever touch the hair on an Arab head.

From my village to the next village over, which is Arab, there is a deep ditch, called a wadi. There are barbed wire fences between the villages because the Arabs, who live under the Palestinian Authority rule (not Israeli) within their own towns, are offered exorbitant amounts of money to go murder Jews.

So they do. They break in the fences, slaughter some Jews, and then we hear them over there partying with firecrackers, guns and ululations that they have killed a Jew. (And now they’re set for life.)

Happened again last week. They tried again a few hours ago, in the same town. I can hear their celebrations from my window.

Jews in Israel protest that what you around the world are hearing in the media is all lies, but even video evidence is manufactured, and it’s all become such a loud noise with the Arabs wailing and accusing and the Jews handing over more and more land to appease them.

So the Jews are drowned out and the squeaky wheel gets the oil, and antisemitism rises like fumes from Aushwitz.

The fact is Gaza is completely under Hamas control, not Israeli. Gaza is NOT OCCUPIED. Arab towns and villages in the state of Israel are not only under the control of the Palestinian Authority, there are huge red signs by the entrances warning Jews not to go in.

Their towns are Judenrein, because they will kill us if we go there. We have gates and fences in our towns to protect us, but Arabs are allowed to go anywhere in Israel.

We just have to check they don’t have knives or guns, as yesterday, found in children’s backpacks. Or last week, as a young father was murdered in his peaceful neighborhood.

This is the reality of Israel today. The Arabs have freedom of movement, but as one strong young Jewish man told me recently, as we looked out over the wadi behind his home, “Jews don’t go there, because we are afraid.”

Moshe would be horrified.

I am attaching a link to this blog, of a young Israeli man, a career IDF soldier, grandson of holocaust survivors, telling what he saw in Syria, and what the State of Israel did about it. The fact that he is a grandson of holocaust survivors is not paraded for your sympathy, but for your understanding of his perspective on actual atrocity, not manufactured for media consumption stories.

This video is several years old, and the care given the fleeing Syrians on our border has increased exponentially since the statistics he mentions.

This. This is how Israel acts.

Attached are my photos from my hike today. I carefully stayed within the barbed wire Jews now have to live behind.

I believe I may have been walking on an old ruin amongst the boulders on that hilltop, but then again, everywhere you step here is sacred ground, watered by the blood of my ancestors, who miraculously survived down to my own generation.

I find in my memories of Moshe, and the memories he passed on to me, all that is beautiful, honorable and worthy of mention representing the actions of this nation. Willing to go to war for the survival of the nation, just as willing to become the primary caregiver for one’s aging parent, to lose one’s job and financial security to do the humblest of chores for those you love.

Not rapacious. Not bloodthirsty. Not a thief or a hater. Just men and women, returning to the only place they can call home, to build a place for their families.

About the Author
Mother of 4, grandmother of 10, retired Registered Nurse, using my phone to photograph and observe Israel as a new Oleh. A lifetime of reading biographies of the founding fathers, history of Israel, history in general, to making aliyah as a middle aged wanderer, my hobbies of people watching, exploring, photography, reading and writing are put to good use when it comes to blogging. Originally from Seattle, I grew up in the Rocky mountains, from Wyoming to Alberta, Canada. Cowgirls fit into Israel well. From a very assimilated family, I became Baal Tshuva in 1999, and have lived amonst the Charedim ever since, although I consider myself just plain Orthodox. With a big sun hat, because I am allergic to the sun, I wander around with my phone as my camera and try to advocate for the complexity that is Israel, to my very large group on non Jewish internet friends and assimilated Jewish friends from around the world.
Related Topics
Related Posts
Comments