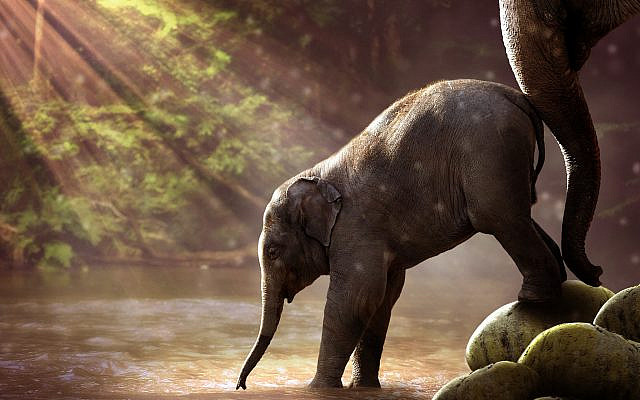 After the story of Akeidat Yitzchak, the Torah mentions that Avraham received a report of his brother Nachor’s progeny. In the list of Nachor’s children that was communicated to Avraham, the sixth son mentioned is named Pildash (Gen. 22:22). The etymology of this name is somewhat unclear, with some linguists explaining it as a portmanteau of the Hebrew words pladot (“torches”) and aish (“fire”) that appear side by side in Nehemiah 2:3. The word pladot, by the way, appears only once in the Bible, and is seemingly a metathesized version of the more familiar word lapidot (“torches”).

In addition to this etymology of Pildash’s name, there is another tradition concerning its meaning: Rabbeinu Efrayaim ben Shimshon (to Gen. 22:22) explains that the name Pildash is a contraction of the Hebrew words pil (“elephant”) and dash (“threshes”), an allusion to Pildash’s superlative height that allowed him to “thresh” over those shorter than him. Besides this, the word pil does not appear anywhere else in the Bible. In fact, Biblical Hebrew seemingly has a different word for “elephant”: shenhav. In this essay we will explore what, if anything, is the difference between the Hebrew words pil and shenhav.

The word shenhav appears twice in the Bible, both times in verses that list the items that King Solomon imported from overseas: “gold and silver, shenhabim, monkeys and parrots” (I Kgs. 10:22, II Chron. 9:21). The first part of this verse lists precious materials, while the second part lists exotic animals. In order to determine the true meaning of the Hebrew word shenhav, we must question whether it belongs to the first category or the second. The cantillation of the verses in question suggests that the word shenhabim is connected to the second part of the verse. Thus, it would seem that the word shenhabim refers to a species of exotic animals.

That said, the commentators do not unanimously agree to this. The Targumim (to both Kings and Chron.) render both instances of shenhabim into Aramaic as shen d’pil (literally, “the tooth of an elephant”) — i.e. ivory. This explanation suggests linking shenhabim to the first part of the verse, which listed “gold and silver.” Most of the standard commentaries (i.e. the Radak and Metzudos in Kings. and Chron., as well as Rashi, Rabbi Yosef Karo, and Ralbag to Kings.) follow this approach. Similarly, Abarbanel (to Kings. 10:22) writes that Christian commentators explain shenhabim as “pearls” — again explaining it as something more akin to “gold and silver” than to “monkeys and parrots.”

However, the commentary printed under Rashi’s name to Chronicles (not actually written by Rashi) explains that the word shenhav not only refers to an elephant’s tusk, but also to the elephant itself. He thus links the word shenhabim in the aforementioned verse to the clauses before and after that word.

Moreover, Rabbi Yonah Ibn Janach (990-1055), in his Sefer HaShorashim, suggests that the word shenhav is a compound word derived from two words stuck together. Although he does not explain himself, it is safe to assume that he means that shenhav is derived from shen (“tooth”) and hav (“gives”). If so, then the term shenhav should refer to the beast who “gives” away “teeth” (i.e. tusks of ivory) that can be used for various purposes. Accordingly, he too seems to explain that shenhav does not refer to “ivory,” but to the elephant itself. In an unpublished piyyut for Yom Kippur, HaKallir lists shenhabim as animals of exceptional height, implying that the word means “elephant.” The 14th century Yemenite sage Rabbi Avraham ben Shlomo (in his commentary to Kings.) also writes that shenhabim means “elephants” and not “ivory.”

Rabbi Dr. Ernest Klein (1899-1983) and others parse the word shenhav differently. They agree that shen means “tooth,” but argue that hav is related to the Ancient Egyptian word yev, which means “elephant”. (A famous example of this is the island of Elephantine in the Nile River, which is also known as Yev/Yebu.) Rabbi Dr. Klein also notes that the English word ivory is ultimately derived from the Ancient Egyptian word yev (by way of the Latin word for “ivory,” ebur).

Although the word pil never appears in the Bible, it is a fairly common word in post-Biblical Hebrew. The word appears once in the Mishna (Kilyaim 8:6) in a discussion of which animals are considered a behemah and which a chayah.Pil (or its Aramaic equivalent pila) also appears multiple times in the Talmud. For example, when asserting that somebody never sees something in a dream that he has never seen in real life or has never thought about, the Talmud gives the example of “an elephant (pila) entering the eye of a needle” (Berachos 55b). There is even a discussion over whether seeing elephants in a dream is a good sign or a bad omen (see Berachos 56b-57a). If a person sees an elephant in real life, there is a special blessing to recite (see Berachos 58b).

As Rabbi Dr. Klein notes, the Mishnaic Hebrew word pil is related to the Persian pil, the Arabic fil, and the Akkadian piru/pilu. Dr. Chaim Tawil similarly points out that the Biblical Hebrew term shenhabim is a semantic cognate of the Akkadian term sinni piri, which means “elephant tusk.” Parenthetically, alfil (Arabic for “the elephant”) is the name of the original chess piece that eventually came to be known as a bishop. This piece was in the shape of an elephant (hence, the name alfil) and, like the modern-day bishop, the alfil also moved diagonally (but unlike the bishop, the alfil could only move two squares at a time and could jump over any intermediate pieces).

Besides these foreign cognates, where does the word pil come from and why does it refer to an elephant?

Rabbi Yehoshua Steinberg of the Veromemanu Foundation notes that the Talmud (Brachos 56b, 57b) seems to associate the word pil with the Hebew word pele (“wonder”). Of course, elephants certainly fit this bill, as they are “wondrously big.” Rabbi Yechiel Michel Stern (Rav of the Ezras Torah neighborhood of Jerusalem) connects the word pil to nefilim (“giants”), explaining that both elephants and giants cause fear to “fall” (nofel) upon those who behold them (see Ber. Rabbah 26:7). Rabbi Steinberg adds that Rabbi Yosef Bechor Shor (to Gen. 6:4 and Num. 14:33) also connects the term nefilim to pele. 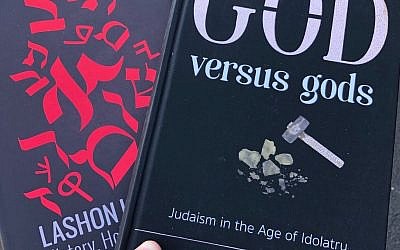 Now, regarding elephants, Rabbi Menashe ben Israel (1604-1657) writes that when they kill a person, they stand by the corpse until they can bury their victim. In fact, other researchers have noted that elephants bury all sorts of dead animals that they encounter, and seem to otherwise take a special interest in the concept of death. A BBC World News headline from 2014 reads, “Kenya elephant buries its victims.” In light of all this, it makes much sense that the Hebrew word for “elephant” would be related to the concept of “death.”

To summarize our findings: The Biblical term shenhav means either “elephant” or “ivory.” Even if it means “elephant,” this word focuses specifically on the elephant as the source of ivory. The post-Biblical term pil, on the other hand, refers to other properties of the elephant, such as its superlative mass or possibly its knack for burying the dead.

Interestingly, the Oxford English Dictionary cites the suggestion that the English word elephant ultimately derives from the Hebrew word elef (“ox”), which itself might be related to pil(a) by way of metathesis. By the way, various common Jewish surnames like Helfand, Gelfand, Elfant all mean “elephant.” Remember these facts and don’t forget them, because an elephant never forgets!