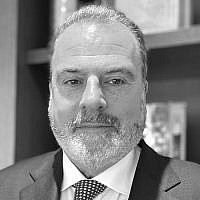 The Blogs
Bobby Rechnitz
Apply for a Blog
Advertisement
Please note that the posts on The Blogs are contributed by third parties. The opinions, facts and any media content in them are presented solely by the authors, and neither The Times of Israel nor its partners assume any responsibility for them. Please contact us in case of abuse. In case of abuse,
Report this post.

On November 1st, Israel will decide whether to return to its former glory under Benjamin Netanyahu or continue to steep deeper into chaos and uncertainty under a coalition of adversaries and opportunists. Senior officials in Washington and across the Middle East, have told me they would choose Netanyahu.

Countries are ready to make peace and businesses are waiting to invest billions in a strong prosperous Israel.

Over the years, I have helped pump hundreds of millions of dollars into the Israeli economy through real estate developments and by encouraging multiple U.S. states and municipalities that believe in economic integrity to view Israel as a safe conservative investment. Sadly, the past 18 months have made it very hard to advocate for the Start-Up Nation as a sound financial investment.

For those who suggest the Bennett-Lapid government was much of the same, here’s what was different:

For thirty years Netanyahu has used every public and private platform to rally against the threat of a nuclear Iran. Today, Jerusalem appears silent as Tehran continues to race to the bomb, while a new Iran Deal is negotiated behind closed doors.

The Bennett-Lapid government has capitulated to Lebanon, an Iranian proxy – in the U.S. brokered maritime agreement, with gifts of sovereign territory and natural treasure – for nothing in return. Just days before an election and without the approval of a Knesset majority.

The deal may have been in the interest of America, but a savvy Israeli leader would have pushed back to get the best possible deal. History will show the Netanyahu doctrine as ‘Peace Through Strength’ and the Lapid legacy as ‘Take Whatever You Want – It’s Free.’

Israel enjoyed the quietest and safest decade in its history under Netanyahu. Today, they are engulfed in a wave of terror and violence, the likes of which have not been seen, since the last intifada. The Palestinians have been so emboldened that they even started a new terror group called The Lion’s Den, unifying once-competing factions – to kill and maim more Israelis.

After building Israel into a free-market powerhouse and avoiding multiple global economic downturns, Netanyahu now watches as novices plunge the country into recession with inflation through the roof and prices making it harder for everyday Israelis to make it to the end of the month.

This isn’t another pitch from the Diaspora explaining why Netanyahu is good for the Jews. I am a private individual that generally works quietly in the background. Before this election period, my last major interview with an Israeli newspaper was over a decade ago, but for the sake of Jerusalem, I can no longer remain silent.

We are at a very dangerous juncture in history, with global economic uncertainty and a new axis of evil comprising Russia, China, and Iran.

It’s time for the Bennett-Lapid experiment to come to an end – Israel and the free world need a statesman.

About the Author
Bobby Rechnitz is a prominent Los Angeles-based philanthropist and real estate developer who was instrumental in the passage of the U.S. Iron Dome Legislation. Through his Bomel Initiative and together with representatives of the other Abraham Accords countries he has held meetings in congress and lobbied the Biden Administration against re-entering the JCPOA-Iran Deal.
Related Topics
Related Posts