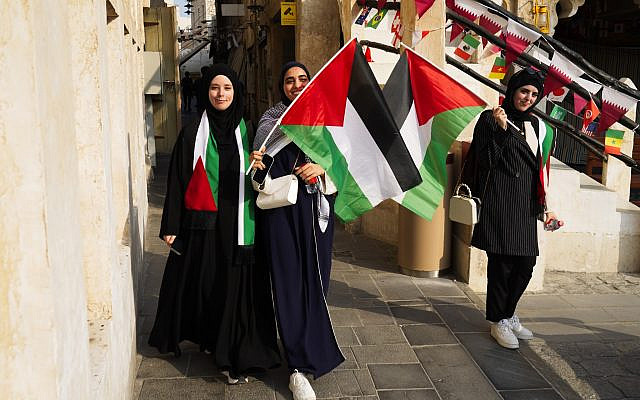 When Qatar won the bid to host the 2022 FIFA Football World Cup in 2010, the decision was met with skepticism. The criticism mounted from human rights organizations, some Western pundits with days approaching the World Cup even more, stemming from Qatar’s treatment of migrant workers, women and their take on the LGBTQ rights. Amnesty International even termed it “Qatar World Cup of Shame” and in its report stated that migrants, mainly from South Asian countries, were being abused and exploited in a number of ways, ranging from forced labor to appalling living conditions, while building the state-of-the-art stadiums. A Qatari official recently said “400-500” migrants died working on World Cup projects.

Qatar is the first Middle Eastern and Arab Muslim country to host the mega sporting event which is symbolic in itself given the pervasive Islamophobia and stereotypes surrounding the Middle East and what the region has been through. Yet one cannot help but notice the apparent incidents of hate and divisiveness arising from a range of political narratives taking center stage during this tournament of global importance.

When Israeli reporter Moav Vardy got yelled at by an Arab fan, an otherwise unique opportunity to bring people closer met a dead end. “You are not welcome here. This is Qatar. This is our country. There is only Palestine; no Israel,” the enraged fan was seen as saying in a video that went viral and was also posted on several Palestinian social media accounts. The act many consider was a kind of protest to demonstrate support for the Palestinian people despite its antisemitic and racist nature. If anything, it just went on to show that despite peace accords and normalization of ties between Israel and Arab states, the hatred and xenophobic attitudes on ground still persist. The stonewalling and outrage against Israeli citizens did not help the Palestinians, but reminded of a lack of tolerance and deep-rooted antisemitism still intoxicated in many Muslim communities around the world.

Many Israelis reported being treated with hostility and several videos pointed to people walking away from them when discovering they were from Israel. “We didn’t want to write these words, we are not the story here but after ten days in Doha, we cannot hide what we are going through. We are feeling hated, surrounded by hostility, not welcomed,” shared journalist Raz Shechnick as cited by Jerusalem Post. Reports also indicated that Doha banned Kosher food and the Jewish prayer. The claims and Qatari emir’s statement himself that “everybody is welcome” also fell flat with such events.

The World Cup also showed double standards on part of some of the critics of the Arab nation, predominantly some Western pundits and media outlets, that are selective in their outrage when it comes to rights abuses. The coverage and outrage is marred by racist views and some sense of moral superiority more than a genuine concern for human values and rights as could be seen from a cartoon published by a French outlet, depicting the Qatari national team as terrorists.

Denmark, for instance, had its former PM Helle Thorning-Schmidt sport a blue dress with rainbow sleeves in support of the LGBTQ+ community and rightfully so. Yet Denmark’s own treatment of minorities, particularly Muslim Syrian refugees, has been far from humane or welcoming in the not-so-distant past. Denmark is the only country in Europe consistently demanding that Syrian refugees go home and even sent a deportation letter to children as young as 12. Its policy towards asylum seekers and refugees has become notably more hostile in recent years.

It is fair to criticize Qatar but better and more plausible at the cost of some self-reflection by some critics, including Denmark, where I happened to have lived. Because, if not, it only reeks of White Savior Complex and some perceived high moral ground.

Rights abuses and violations of migrant and refugee rights in the Western hemisphere do not meet the similar kind of outrage. When 27 migrants died at the English Channel as France and the UK argued about who should be rescuing, the  rage for those responsible was nowhere to be seen. Refugees are discriminated against based on their faith and the color of their skin. Likewise, many from the LGBTQ+ community died as a result of gun attacks in the US and women are denied abortion. The US has seen nearly “240 bills introduced that directly roll back LGBTQ+ rights or criminalize gender-affirming care,” according to Ayman Mohyeldin of MSNBC, yet these concerning developments do not garner calls for boycott of the future World Cup in America.

Safe to say, this has been the most politicized World Cup and what could have been an exemplary venue for bridging gaps, promoting acceptance and bringing people together is, unfortunately, marred by racism and hypocrisy from many corners. But as someone with Muslim roots, I stand against antisemitism and do not feel proud of the way Israelis are being excluded and shunned at the World Cup in the guise of it.

About the Author
The writer is a journalist from Pakistan, mostly covering social issues and women's rights, and an Erasmus Mundus scholar currently based in Prague.
Related Topics
Related Posts
Allia Bukhari