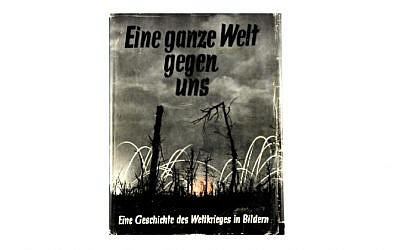 (This is the front cover of the book by Werner Beumelburg published by Ullstein Verlag in 1934 and copied from the website booklooker.de)

All Israelis know the Hebrew phrase:
כל העולם נגדנו
which means “The whole world is against us”. But not everyone knows the origin of the phrase. It is the title of a book published in 1934 and it means, roughly, “we stood against the whole world and we did not flinch”.

The book was very popular and was brought to Palestine by Jewish immigrants from Central Europe. Back in Central Europe, the book gave rise to a surge in patriotic feeling, but not to careful thinking about logical conclusions.

A person not caught in the thrall of patriotic excitement might think “Wait! If you are fighting against the whole world, does not it mean you are going to lose?”

But thinking this way is defeatist. Germany was not going to give up its rightful claim to German lands in Eastern Europe.

In fact as we know today the world was not the enemy of the Weimar Republic. The feeling that gave rise to the title of the book, was a self-fulfilling prophecy. Seizing lands in Eastern Europe that supposedly belonged to Germany was what made the future war inevitable.

The world was not Israel’s enemy in the past. Israel fought the Six Day War with French-made aircraft and British-made Centurion tanks. After the Six Day War Israel began to receive American equipment. American airlift to Israel in 1973 was the largest ever and dwarfed the Soviet airlift to Syria and Egypt.

It is true though that today Western attitudes towards Israel are changing. There are pro-Palestinian demonstrations and there is concern that maybe the Israeli rule in the West Bank (known in Israel as Judea and Samaria) may be a case of an apartheid regime.

The key question for Israel is whether Judea and Samaria are indeed ancestral Jewish lands that cannot be forfeited, or maybe the West Bank is an Arab country that is not Israel to begin with?

For Israel pressing to keep these lands, if successful, would result in the demand to give Palestinian Arabs living there Israeli citizenship, so as to avoid compulsory economic sanctions reserved for apartheid regimes.

So why would Israel press on, despite obvious negative outcomes?

Here we get to the explanation. The whole world is against us, so whatever we do, nothing will change. The world will still be against us. It is a self-fulfilling prophecy.

But then, again, if the whole world is indeed against you, how do you then expect to win? Does not this mean you are going to lose?

Here is the same logical gap in thinking that was exposed in the book, “Eine ganze Welt gegen uns”. Most people understand that their country, whichever it may be, needs friends and allies. But some nations choose to dwell alone and to ignore the overwhelming odds.

The question: is it really possible to win this way?