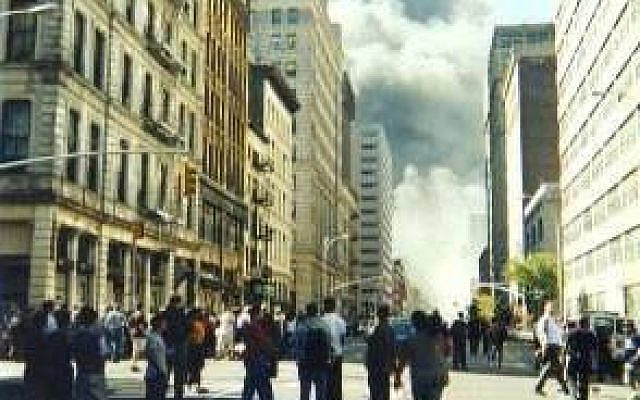 I was at my internist’s office checking my blood pressure after a particularly eventful weekend attending to my 5 year old and 9 year old daughters. I approached the receptionist desk to check out.

The workers were buzzing.

“What happened?” I asked.

“A plane crashed into the World Trade Center!”

I don’t know why I said it. I was aware that planes could accidentally fly into buildings. A plane had hit the Empire State Building in 1945  killing 14 people.

But I just knew.

Then, it was announced a second plane had flown into the second tower.

For the rest of the day I wandered in front of the television set in disbelief, pain and anger.

We learned that there had been four planes, not two. One had crashed into the Pentagon in Washington D.C. and the other in a field in Shanksville, Pennsylvania.

Fifty thousand people worked in the  Twin Towers. Could they all have died?

I was very familiar with the buildings.

I had worked in the business office of one of the trades constructing on the towers.

I remembered  the elevator vibrating as it ascended.

Years later, my father took my fiancee and I to a celebratory lunch at the Windows of the World restaurant on the 106th floor.
The view of the Manhattan, Hudson River and New Jersey was disquieting.

Man was not meant to live among birds gliding on thermal currents.

The death toll from the four attacks was 2,977. Six thousand were injured.

Five weeks later I flew to New York City to visit my sons who were enrolled in area colleges.

There was an acrid, bitter, stinging odor in the air.

It resembled the smell after an electrical fire.

It remains a loss to which we will never be reconciled.

But they did not succeed.

Nineteen years later, almost to the day, an American president helped bring about historic changes in the Middle East.

There will be peace, despite the terrorists and their enablers.

About the Author
Elaine Rosenberg Miller writes fiction and non-fiction. Her work has appeared in numerous print publications and online sites, domestically and abroad, including JUDISCHE RUNDSCHAU, THE BANGALORE REVIEW, THE FORWARD, THE HUFFINGTON POST and THE JEWISH PRESS. Her book,, FISHING IN THE INTERCOASTAL AND OTHER SHORT STORIES is available on Amazon and Kindle.
Related Topics
Related Posts
Comments