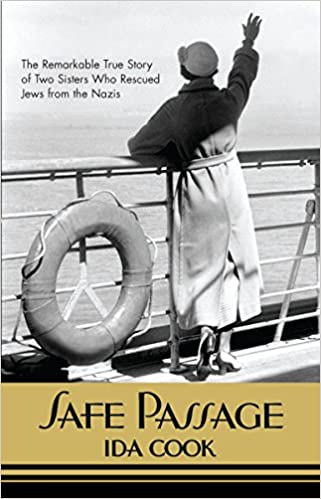 While the rescue operations as described are amazing, I was not satisfied with the information in Eder’s book. Thus I immediately purchased via Amazon Ida Cook’s own account (first published in 1950) – SAFE PASSAGE: The Remarkable True Story of Two Sisters Who Rescued Jews From the Nazis. (They also rescued non-Jews.)

This personal account is excellent – told in a down-to-earth manner that packs more emotional punch because of its simplicity. I highly recommend the book.

What’s especially interesting is that, as explained in SAFE PASSAGE, Ida fell into becoming a romance novelist, and the proceeds of this unexpected career shift helped finance the rescue efforts of the two sisters. Their cover – which was actual fact – were their trips from England to the European continent to attend opera performances (always in the cheap seats). Their last trip into Germany was in August 1939.

Here is one typical understated passage from the book:

Oh, blessed light romance that kept the money rolling in! … And two more people could live. We brought them out on August 29, 1939.

In addition, Ida tucks in some very interesting historic facts that I have read nowhere else:

Ida arrived in Frankfurt soon after Kristallnacht (Nov. 9-10, 1938) and was told the following by her friends, the account of which Ida wrote was “a demonstration of British justice and fairness that has stayed with me and warmed my heart ever since.”

.. on the ninth and tenth of November, when the SS men were going through the streets, beating up old people, burning the synagogue and Jewish shops, and shooting whenever they felt the urge, the [Frankfurt] British Consul opened the Consulate day and night. Hundreds of those unfortunate people, most of whom could speak little or no English, poured into the Consulate and stood there – some of them all night in the garden in the rain—because there they could not be arrested. It was a piece of Britain.

“Not only that. Those who came to the Consulate hungry and in need – no Jew was allowed to buy food for nine days – were fed. And I understand the Vice-Consul even went through the streets, with food in his car, to feed those in want.

In recounting another one of what Ida calls her “cases,” she included this information about Austria before the Anschluss (annexation of Austria into Nazi Germany) in March of 1938.

Unemployment was rife in Austria at that time, partly because it was subsidized by the Nazis from Germany. They used to pay enormous sums to corrupt officials in firms and public undertakings in order to keep the rate of unemployment high. Then, as a valuable weapon of propaganda, they could compare the large-scale unemployment in Austria with the ‘complete employment’ in Nazi Germany.

SAFE PASSAGE is an amazing firsthand account of what two ordinary people with very limited funds – although with a great deal of courage and determination – undertook against evil.

As Ida said, “We called ourselves Christian and we tried to do our best.”