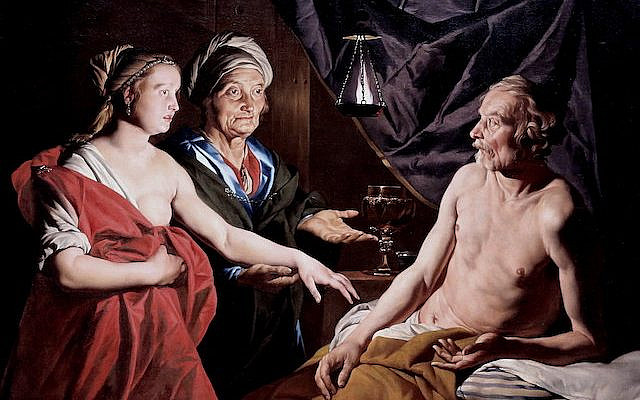 The joke goes that for husbands, the most important words are not “I love you,” but “Yes, dear.”

In this week’s parsha, Vayeira, Sarah acts to protect Yitzchak from Yishmael and demands that Avraham drive out Hagar and Yishmael. “And God said to Avraham, ‘Everything that Sarah says to you, listen to her voice—shema bi-kolah—because it is through Yitchak that your offspring will be reckoned” (Gen. 21:12).  God is saying to Avraham: The nation of Israel will descend from Yitzchak, and it is through him that My promise to you will be fulfilled. His identification as your heir is paramount. Listen to Sarah’s voice.

The saga of Hagar and Yishamel begins already in last week’s parsha, Lech Lecha. Sarah, then named Sarai, says to Avraham—then Avram—that she is barren and that he should take her maidservant and have children with her. What was Avraham’s response? He did what she said: “And Avram listened to Sarai’s voice—li’kol Sarai” (Gen. 16:2).

These two verses of the pivotal act of listening to Sarah’s voice differ in one key letter. In the verse above, Avraham listens li’kol Sarai, to the voice of Sarai, with a lamed preceding the word kol, voice. This stands in contrast to God’s command to Avraham in this week’s parsha, where Avraham is told to listen bi’kol Sarah—to, or into, Sarah’s voice—with a bet as the first letter, not a lamed.

While generally in Tanakh there might not be a significant difference between the two, in this case, I think there is a profound one.

To listen to the voice—“li-kol”—means to obey. Avraham obeyed what Sarah said. This is a surface “Yes, dear.” It is the “Yes, dear” of the joke.

Sarah directs Avraham to have intercourse with Hagar, who will bear a child through her. And Avraham’s response? He follows and obeys. “Take your maidservant? Yes, dear. Wonderful idea!”

But is this the response that Sarah wanted? Such a response is listening li, to the surface meaning of her voice. It is following her directive and nothing more.

At that moment, did Sarah want compliance, or did she want Avraham to empathize, to actively listen, to hear her pain?  It would have made all the difference had Avraham started not with obeying her voice but with listening bi’kolah, to the anguish that lay beneath her words: “Sarah, I can’t even imagine how you must be feeling right now. I know how much you want to have children and to do so with me. How could I ever be intimate with anyone else?” Whatever they would have decided in the end, Sarah would know that she was loved and that Avraham felt her pain.

Avraham later banishes Hagar and Yishmael. It is an act that can be seen as morally fraught and that will have damaging consequences that will reverberate for future generations. Here again he listened li’kol Sarah—to the surface meaning of her words. But God had told him to listen bi’kol, to their deeper meaning. As the verse explicates: “Everything that Sarah says to you listen bi’kolah.” Why? “For in Yitzchak your progeny will be reckoned.” Listen, God is telling Avraham, first and foremost to what Sarah is saying on a deeper level. She is trying to protect Yitzchak and the future of the Jewish people. It is that concern that you must heed. How you act to achieve that is a different question.

In marriage, we tend to operate on the li-kol level. One spouse might say, “You never take out the garbage! You never do the dishes!” In response, the other spouse is likely to shift into defensive mode, and to argue back about what is being said on the surface level: “What are you talking about! I did that just yesterday! You’re so wrong!” And the situation deteriorates from there.

If at that moment the other spouse were able to shift gears and delve into the voice and not reside on its surface, this exchange would likely bring about not fighting, anger, and a rigid entrenchment in one’s position, but rather empathy, closeness, and perhaps even real change.

That would be a “Yes, dear” that really matters.