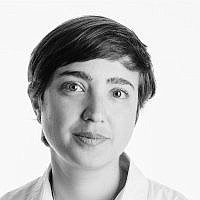 The Blogs
Shaqued Morag
Apply for a Blog
Please note that the posts on The Blogs are contributed by third parties. The opinions, facts and any media content in them are presented solely by the authors, and neither The Times of Israel nor its partners assume any responsibility for them. Please contact us in case of abuse. In case of abuse,
Report this post.

“Young Settlement” is a cover name used to obscure the settler movement’s construction of ten illegal outposts a year. These masters of the land understand, without a doubt, that there is no problem in breaking the law, and the results of this understanding are evident in their demonstrations.

For about two weeks now, the Hilltop Youth have been raging without restraint and the government remains silent. Why? Because above every rolled-over police car, bleeding policeman and shattered glass shines the headline “Young Settlement.”

As Donald Trump’s term in office comes to an end, we’ve recently seen the birth of the “Young Settlement” campaign, part of the settler right’s final attempt to promote land grabs and change the reality on the ground in the West Bank, before an adult once again assumes the seat of the President of the United States. Although in 2020 we did not see an official annexation of the West Bank, we did see the highest level per year of settlement construction plan approvals in the past two decades. Now the settlement enterprise is trying to scrape together a few more final achievements.

“Young Settlement” is the new clean label given to the dozens of illegal outposts that the right-wing leadership seeks to legitimize [retroactively authorize], and our government is actively participating in their campaign. “A humanitarian step,” lauds Minister Michael Biton. “Salt of the Earth,” exclaims Minister Omer Yankelevich. Tzachi Hanegbi and Yuval Steinitz’s words of support do not even warrant special mention.

So what about these representatives of the “Young Settlement,” dressed in their military uniforms and even suits, and the Hilltop Youth, with their payot, sandals and flying stones? Well, all of the inhabitants of the outposts share a worldview, according to which all of the land beyond the Green Line is ours, and must be conquered one way or another. Each outpost has its own story about the way in which the land was seized, how it was built and the operations behind its establishment. However, what they all have in common is a blatant disregard for law and order. Because for the masters of the land, all means are permissible and legitimized in order to fulfill our vision.

In recent years, roughly ten new illegal outposts have been built each year. With enough insistence, a little bit of luck and a lot of political pressure, each of these outposts will eventually receive an access road, connection to a water system, and possibly even electricity from a neighboring settlement. Over the years, their residents will knock on the doors of government offices and demand the ultimate treatment–legalization. In their attempts to legalize these illegal outposts, the government is signaling to settlers that the law may be applied selectively, and may even reward them.

So, where is the surprise that following this criminal construction comes other types of crime, including severe violence of the likes that we saw in the Hilltop Youth’s recent riots?

Precisely in the year that the Israeli public and its leaders chose peace over annexation, an alternative reality continues to emerge in the Occupied Territories.

The masters of the land are rioting, the security forces are accommodating them, the government is backing them, and the de facto annexation continues to advance at a stubborn crawl. In particularly shocking cases, the settlement leadership will denounce the “weeds” of its society but has no intention of sealing the crevice through which they grow. Jewish terrorism has proven very effective in removing Palestinians from the land and clearing the way for the next settlement to be built, despite the anger of the majority of the Israeli public, which prefer peace.

This is what the “Young Settlement” campaign would prefer to hide. When the law is a mere recommendation, it is the beginning of a slippery slope. When you turn a blind eye to crime, it becomes the norm. And when it happens beyond the Green Line, it is only a matter of time before it seeps over into Israel. Every day that we continue our military control in the West Bank, the line becomes evermore blurred.

Very soon, if not already, we will realize that the essential question that should bother us is not whether Israel is interested in annexing the settlements, but rather are the settlements about to annex Israel.

About the Author
Shaqued Morag is the Executive Director of Peace Now. Before joining Peace Now, she served in senior positions in the Meretz party, including as the party’s interim Secretary-General and as an adviser to MK Michal Rozin. Previously, she was a community coordinator in Jerusalem for Mahapach-Taghir, a grassroots Israeli Jewish-Palestinian organization for social change, of which she is now on the Executive Committee.
Related Topics
Related Posts
Comments