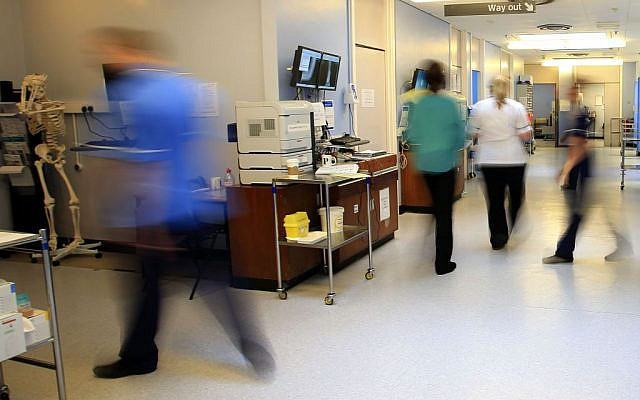 Inside an NHS hospital (Jewish News)
In a pandemic the one job I don’t want is Minister of Health. As the winter drags on, more and more people are testing positive for coronavirus and the number needing hospital beds grows alarmingly. The possibility exists that the NHS becomes overwhelmed and our Jewish sick people, like everybody else, cannot be looked after.
There is a solution, but the NHS is not at all keen to adopt it. Long before the pandemic many American hospitals reached agreement for hotels to be used to look after patients who were convalescing.
They might be getting better from all kinds of diseases and they come in two types. Those who still have to be under observation as they recover and those who cannot go home because there is nobody to look after them if they do. While the community is doing its best, there are any number of people who need to be under observation by qualified nurses and we can’t deal with that.
The solution is to take whole floors in hotels and then the only essential nursing the patients will need is to be given their medicine correctly. For that the hotel is given a nurse who can ensure that there are no mistakes.
The hotel already has maids to clean the rooms and there are plenty of hours in the day for the nurse to help the patients with baths.  The hotel is perfectly capable of dealing with diets and providing food is part of their everyday activities. A suite sitting room can be used as a lounge and there can be television and, very important, company for the lonely.
The problem of loneliness is very real. Where people are recovering from illness and having to do so in the solitude of their homes, it can be very depressing.
Now, of  course, the idea of sharing a hotel with people recovering from hospital can raise concerns. That is why it is important to take whole floors and to ensure that there are specific lifts which the patients can use to enter and leave the hotel. Ordinary guests don’t need to come in contact with those convalescing.
This system has prove its worth in many parts of the States, but the problem in this country is that it would be an innovation. New ideas from outside the profession are not always welcome.  The answer, of course, is to take advice from American hospitals for which the system works well, but that means asking for help and, as we are constantly told, our NHS is a world beating organisation and, therefore, would say it doesn’t need advice from a bunch of foreigners.
That is a disastrous attitude and it puts arrogance ahead of common sense. If there are specific problems, they are there to be overcome because we have a situation which may get a lot worse before it gets better.
At present attempts to discuss the possibility are being cut off by clerks who protect their masters – and mistresses – from even hearing the argument.  We will be told that everything is being done to provide more beds.
Unfortunately the newly built hospitals can’t work effectively because they lack sufficient staff, but the hotels have the staff for all non-medical needs. The NHS would also provide a lifeline for hotel companies in danger of going broke and that is a situation where a deal is not too difficult to reach.
The hotel industry does have a national body and they could be called in as well. With an average of 20,000 people a day proving positive with the virus, there should be careful consideration  of any possible solution, and it is up to the Minister of Health to demand that this happens.

As more people die and the problem of beds gets worse, everybody will be ringing their hands and blaming the government, but the government is taking what it calls scientific advice, and the arguments are not supposed to involve personal aggrandisement. Perhaps all this has been discussed and rejected for reasons I can’t envisage. If it works for the Americans, though, why can’t it work for us?