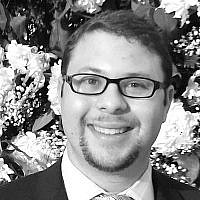 The Blogs
Moshe Kurtz
Rabbinical Student
Apply for a Blog
Advertisement
Please note that the posts on The Blogs are contributed by third parties. The opinions, facts and any media content in them are presented solely by the authors, and neither The Times of Israel nor its partners assume any responsibility for them. Please contact us in case of abuse. In case of abuse,
Report this post.

It is an odd but recurrent reality that two schools of thought that bear diametrically opposed value systems will reach the same conclusion. Rabbi Elchanan Wasserman, despite being an outspoken opponent of early Zionism, once wrote (Koveitz Ma’amarim, p. 161) that he hoped the founding of the State of Israel was the beginning of the ultimate redemption. He posited that Jewish history is full of dark times followed by a redemption commensurate with the difficulty of the challenges that preceded it. Rabbi Wasserman contended that until now the Jews have always suffered through exiles designed by other nations, but today the Jews find themselves in an exile created by their own brethren, the Jewish State – certainly the redemption that God has in store must be the final one! Ironically, Rabbi Wasserman’s opposition to early Zionism led him to the same eschatological aspiration shared by contemporary religious Zionists: The founding of the State of Israel is a harbinger for the End of Days.

This example is not the first or last time that two diametrically opposed Jewish schools of thought disagreed fundamentally yet agreed functionally.

The crux of my assertion is that within the vast spectrum of Jewish denominations ranging from Reform to Orthodox there are only two possibilities. One is either rooted in a fundamentally Western/secular ethos or fundamentally traditional values; everything in between represents a departure from one of the two baseline norms. Hence, Reform Judaism is both fundamentally and functionally rooted in secular moral values, whereas on the other extreme, chareidim are both philosophically and functionally traditional in their moral outlook. Granted, neither of these statements are newsworthy. However, what do we make of this strange animal known as Modern Orthodoxy – is Modern Orthodoxy fundamentally traditional, just with some progressive tendencies, or is it essentially modernized but tries to reconcile it with halachah and traditional strictures? My thesis is that both sides of this chakirah (dichotomy) are true, just for different types of “Modern Orthodoxy”. I argue that RWMO fundamentally values a traditional social model as the norm, albeit with deviations, while LWMO looks towards progressivism as an ideal state of affairs. This disagreement is the underlying point of contention causing a profound lack of understanding, and at times strife, between the Right-Wing and Left-Wing Modern Orthodox communities.

To move from the abstract to the practical, I would like to introduce a sub-dichotomy of egalitarianism vs. traditional gender roles as a proxy for the larger debate: Take the innovation of Yoatzot Halachah and Maharats in recent years. One could view the two innovations as almost arbitrary points along a spectrum where certain rabbis feel comfortable drawing a line for women’s leadership. Some are comfortable ordaining women as full members of the clergy, whereas more conservative leaders only wish to delegate them (pseudo-)authority in the area of hilchos Niddah. I want to argue that these innovations aren’t superficial phenomena of simply choosing where to draw the line – these are carefully deliberated choices based on each form of Modern Orthodoxy’s perceived ideal norms.

Now let us apply these rules to the Modern Orthodox controversy over women’s leadership:

(A) LWMO’s point of departure or baseline assumption is that men and women should have equal roles. (B) They need to deviate from that norm due to the compelling reason to adhere to halachah. (C) They will permit women to become rabbis because they will only deviate from the egalitarian norm as much as necessary – and as long as there is a way to find halachic justification they will utilize it to limit the deviation that was undesired from the onset.

(A) On the other hand, RWMO’s baseline assumption regarding gender roles is traditional in that men and women have differentiated roles. (B) They find a compelling reason for women to become Yoatzot, to assist women in ways that men are not capable. (C) They limit the authority to hilchos niddah (and even within hilchos niddah) since there is no necessity to deviate further from the baseline assumption of differentiated male-female roles.

Note, that I don’t believe that the positions of Yoetzet or Maharat inherently belong to divergent ideologies – rather, it is the argumentation used to advance each respective position that is reflective of disparate values. Also, it is not the case that RWMO rabbis are unaware of sources to permit women in Torah leadership beyond Yoatzot – rather they see no compelling reason to innovate and depart further beyond that point. Therefore, any further innovation would be perceived as being influenced by secular/liberal priorities rather than traditional Torah values.

However, when one adopts a fundamentally egalitarian point of departure, the claim of Left-Wing proponents is very cogent: Why would one choose to inexplicably draw the line of women’s leadership at Yoatzot when there are sources to justify and perhaps even encourage full clergy status? If the goal is to bring the Modern Orthodox community as close to egalitarianism and Western norms as possible, then it is indeed unreasonable to forbid full female leadership in light of sources that can support it.

This formula can be applied to other major points of controversy between the Left-Wing and Right-Wing Modern Orthodox establishments, at very least within the area of social policy, if not beyond. Take another example such as partnership minyanim. Why is it that members of LWMO have been major proponents of this innovation, while Modern Orthodox rabbis such as Rav Henkin have concluded that it is beyond the pale? The reason here is that this new form of minyan runs contrary to the traditional norm, and RWMO has not been convinced that there is a compelling reason to introduce a seemingly progressive practice. Whereas LWMO would desire in ideal circumstances to have a full egalitarian minyan, they would still need to reconcile it with halachic sources. Take a look at the partnership minyan guide provided on Jewish Orthodox Feminist Alliance (JOFA)’s website – the whole premise is founded upon reinterpreting and finding minority opinions to justify the conduct. It makes sense according to this formula: The utopian ideal is equal gender roles, the reason to depart is halachic stricture, and the limitation is to use the most lenient interpretation of halachah to minimize the necessary departure from the egalitarian baseline.

The fascinating conclusion that one can draw from this observation is that if one agrees to my analysis that RWMO’s point of departure is differentiated gender roles, and LWMO’s is egalitarianism, then RWMO has philosophically more in common with chareidi Orthodoxy, and LWMO with Reform than they have with each other! The reason that we view them as points along a single spectrum within a sub-denomination we call “Modern Orthodoxy” is because each party has departed so far from their norm that they meet in the middle on almost every issue. It is chiefly in the area of social policy that we see a tear in the artificial binding that holds them together. But in truth, RWMO is a more modernized form of chareidi Jewry and LWMO is a traditionalized form of Reform. The ideological rupture has always been lurking under the surface, and it has only been a matter of time until it reared its head. To put it in more moderate terms, LWMO is very similar to the new sect of “Halachic Egalitarianism”, with the one distinction that while the latter chose the route of “updating” the laws regulating halachic social policy, LWMO makes a valiant struggle to reconcile both the modernity and tradition that they value.

I want to take this argument one step further and conjecture that even when RWMO and LWMO agree, it can be for completely distinct reasons. Generally speaking, when RWMO leaders promote women’s Talmud learning, they do so to advance Jewish Torah knowledge as a whole. In contrast, LWMO leaders will generally promote women’s Talmud learning with the (additional) goal of achieving gender equality. They will both support women’s advanced learning, but the values that went into that decision are disparate, and at times diametrically opposed, despite the same result.

Both RWMO individuals and LWMO individuals live in the same communities, attend many of the same synagogues and are even members of the same families. Both camps are similar on a functional level, and that is why they both live together. In my experience, many lay-people have difficulty noticing, or at least, articulating the underlying difference. The fact that some refer to the splitting phenomenon within Modern Orthodoxy as a schism is inaccurate – LWMO and RWMO are two ideologically different sects, and we are seeing the manifestation of these disparities in present time.

While this double-denomination theory of Modern Orthodoxy may sound disheartening, I chose to bring it to the public’s attention for two reasons. Firstly, I think it will enable anyone who identifies with the term “Modern Orthodox” to think about their ideology in a more nuanced manner. Secondly, I think this theory has the counterintuitive potential to decrease strife and friction with the conventional “Modern Orthodox” community. In my experience attending a charedi Yeshiva from childhood through high school, I heard a number of condescending remarks about Modern Orthodoxy – but, I can attest that most yeshivish rabbis do not concern themselves with the policies of YU or the RCA that run contrary to their philosophy of Torah Judaism. The difference in our scenario is that RWMO and LWMO both share, and more importantly, claim, the identity and right to shape what we know as “Modern Orthodoxy”. Thus, for one side to claim that Modern Orthodoxy is more Right-Wing or more Left-Wing is an attack on the other’s very identity! Whereas the yeshivish world has the comfort and security of simply writing off what Modern Orthodox institutions do as something that is not their own.

Therefore, I would like to make the difficult, yet I believe accurate, proposal, that we accept the inherent ideological “schism” and begin to view RWMO and LWMO as two separate sub-denominations, even granting the view that both remain firmly within the bounds of Orthodoxy. With this model of thinking I hope that both RWMO and LWMO, or whatever they should be re-titled, will no longer feel mutually threatened, and that members from both sub-denominations will interact professionally and cordially while both remaining clear and resolute in their respective identities.

About the Author
Moshe Kurtz is a Rabbinical student at Yeshiva University’s Rabbi Isaac Elchanan Theological Seminary (RIETS) and is completing his Master of Science at the Azrieli Graduate School of Jewish Education & Administration. Moshe holds a Bachelor of Arts in Psychology from Yeshiva College where he was also granted the “Steven Gladstein Memorial Award for Service to the Jewish People”. During his undergraduate career, Moshe held the position of Executive Director at Hisoriri, a program which services under-resourced synagogues in America’s Northeast region. Moshe is an alumnus of the LimmudNY/Hartman Rabbinical Student Fellowship and has worked at the UJA-Federation of NY’s Wiener Center for Leadership and Learning. Moshe currently serves as the Rabbinic Intern at the Young Israel of Plainview, works as a Kollel Fellow teaching Talmud at Ramaz Upper School and is a member of the 92nd Street Y’s Jewish Innovation Fellowship.
Related Topics
Related Posts
Comments